Get LitCharts A+
LitCharts assigns a color and icon to each theme in The Symposium, which you can use to track the themes throughout the work.

Symposium highlights two common characteristics of classical Greek culture—homoeroticism (conceived of rather differently from a modern understanding of homosexuality) and love of drinking parties. Plato critiques both these cultural elements by portraying Socrates as the utmost exemplar of sobriety and restraint. In doing so, Plato makes the counter-cultural argument that a true lover of wisdom—even if that person isn’t devoid of desires and enjoyment of material pleasures—avoids the extremes of self-indulgent sexuality and uninhibited drinking.

Socrates has advanced so far in philosophy that he doesn’t get drunk, even if he joins in the ritual drinking of a symposium. The implication is that he is so “drunk” on philosophy that he’s no longer vulnerable to drunkenness from wine, even if he enjoys imbibing. As the men at Agathon’s symposium are deciding how much wine they’re fit to drink that night, Eryximachus says that they don’t need to take Socrates into account, since “he can drink or not drink, so it’ll suit him whatever we do.” Mixing wine with water to achieve a desired level of potency was one of the first orders of business at a symposium, but this doesn’t matter for Socrates, since he isn’t vulnerable to drunkenness the way that the other men are, even if he drinks freely.

At the end of Plato’s dialogue, the dissolute politician Alcibiades—who’s also Socrates’ lover—stumbles drunkenly into the party, supported by a flute-girl. His presence signals that Socrates’s lofty discussion of the immortal form of beauty has come to an end. Alcibiades even elects himself master of ceremonies and fills a huge goblet with unmixed wine, breaching every norm of symposium etiquette. He tells the other guests: “Not that my trick will have any effect on Socrates, gentlemen. However much you tell him to drink, he drinks without ever getting more drunk.” Alcibiades’s teasing “indictment” of his lover Socrates actually underscores Plato’s idealized picture of Socrates as the ideal philosopher who’s untouched by things like drunkenness.

In the course of his eulogy of Socrates, Alcibiades, through his own self-pitying critiques, backhandedly compliments Socrates’s famed sexual restraint as well. Alcibiades admits that he’s in love with Socrates, in part because of his attractive teaching: “My heart pounds and tears flood out when he speaks, and I see that many other people are affected in the same way. [Other famous orators] haven’t produced this kind of effect on me; they haven’t disturbed my whole personality and made me dissatisfied with the slavish quality of my life.” He goes on to claim that Socrates pretends to be erotically attracted to beautiful young men just like anyone else is, but “if you could open him up and look inside, you can’t imagine, my fellow-drinkers, how full of moderation he is!” He indignantly complains that he has repeatedly tried to get Socrates to sleep with him, even prevailed upon him to stay overnight with him in his bed, but after making a bold advance and embracing the Alcibiades all night long, Socrates “completely triumphed over my good looks - and despised, scorned and insulted them […] when I got up next morning I had no more slept with Socrates than if I’d been sleeping with my father or elder brother.” Alcibiades is helplessly attracted to Socrates, in part because of his beautiful way of life, yet he’s repeatedly frustrated and perplexed by Socrates’s philosophical detachment from sexual appetites.

Despite feeling baffled and insulted, Alcibiades concedes that Socrates’s arguments about life are the only ones that make any sense, and that “They range over most — or rather all — of the subjects that you must examine if you’re going to become a good person.” In other words, a person who is truly dedicated to wisdom, like Socrates himself, must not bend to the cultural pressures toward sex or drunkenness; wisdom and philosophy should be satiating enough. Alcibiades’s disruptive presence also serves another purpose in Plato’s dialogue. After the ultimate philosophical prize pictured in Diotima’s mysteries, Alcibiades’s complete failure to grasp Socrates’s teachings—in spite of his superficial attraction to them—has the effect of grounding Socrates and displaying the need to continue giving philosophical discourses so as to lead ordinary people to wisdom while there’s still hope for them. 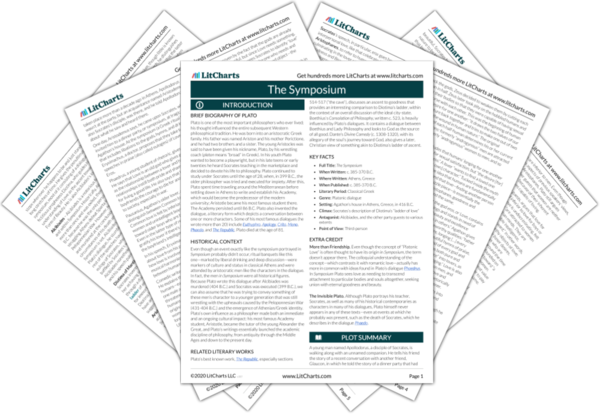 Sobriety, Restraint, and Wisdom Quotes in The Symposium

Below you will find the important quotes in The Symposium related to the theme of Sobriety, Restraint, and Wisdom.
174a-177e Quotes

After this, Aristodemus said, Socrates lay down and had dinner with the rest. They then poured libations, sang a hymn, and performed all the other customary rituals, and turned to drinking. Pausanias took the initiative, saying something like this: ‘Well, gentlemen, what’s the most undemanding way to do our drinking? I can tell you that I’m in a really bad state from yesterday’s drinking and need a rest. I think that’s true of many of you, as you were there yesterday - so think about how to do our drinking in the most undemanding way.’

Common Love is genuinely “common” and undiscriminating in its effects; this is the kind of love that inferior people feel. People like this are attracted to women as much as boys, and to bodies rather than minds. They are attracted to partners with the least possible intelligence, because their sole aim is to get what they want, and they don’t care whether they do this rightly or not. So the effect of love on them is that they act without discrimination: it is all the same to them whether they behave well or not.

These two rules must be combined (the one governing the love of boys and the one governing the love of wisdom and other kinds of virtue), to create the conditions in which it is right for a boy to gratify his lover. These conditions are realized when lover and boyfriend come together, each observing the appropriate rule: that the lover is justified in any service he performs for the boyfriend who gratifies him, and that the boyfriend is justified in any favor he does for someone who is making him wise and good. Also the lover must be able to develop the boyfriend’s understanding and virtue in general, and the boyfriend must want to acquire education and wisdom in general. When all these conditions are met, then and then alone it is right for a boyfriend to gratify his lover, but not otherwise.

“When someone goes up by these stages, through loving boys in the correct way, and begins to catch sight of that beauty, he has come close to reaching the goal. This is the right method of approaching the ways of love or being led by someone else: beginning from these beautiful things always to go up with the aim of reaching that beauty. Like someone using a staircase, he should go from one to two and from two to all beautiful bodies, and from beautiful bodies to beautiful practices, and from practices to beautiful forms of learning. From forms of learning, he should end up at that form of learning which is of nothing other than that beauty itself, so that he can complete the process of learning what beauty really is.”

“You’ve all shared the madness and Bacchic frenzy of philosophy, and so you will all hear what I have to say … But you, house-slaves, and any other crude uninitiates, put big doors on your ears!

‘So, gentlemen, when the lamp was out and the slaves had left the room, I decided I shouldn’t beat about the bush but tell him openly what I had in mind. I gave him a push and said, “ Socrates, are you asleep?”

…“I think,” I said, “you’re the only lover I’ve ever had who’s good enough for me, but you seem to be too shy to talk about it to me. I’ll tell you how I feel about this. I think I’d be very foolish not to gratify you in this … Nothing is more important to me than becoming as good a person as possible, and I don’t think anyone can help me more effectively than you can in reaching this aim. I’d be far more ashamed of what sensible people would think if I failed to gratify someone like you than of what ordinary, foolish people would think if I did.’” 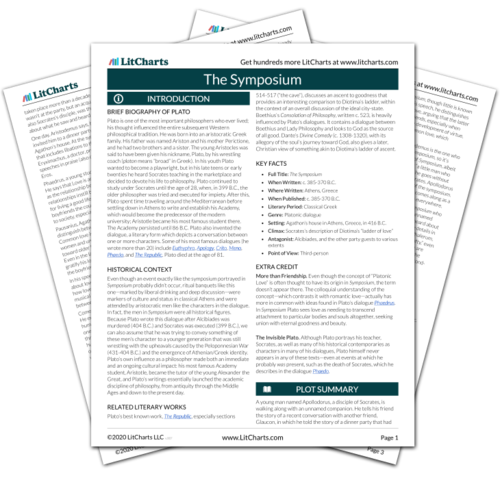 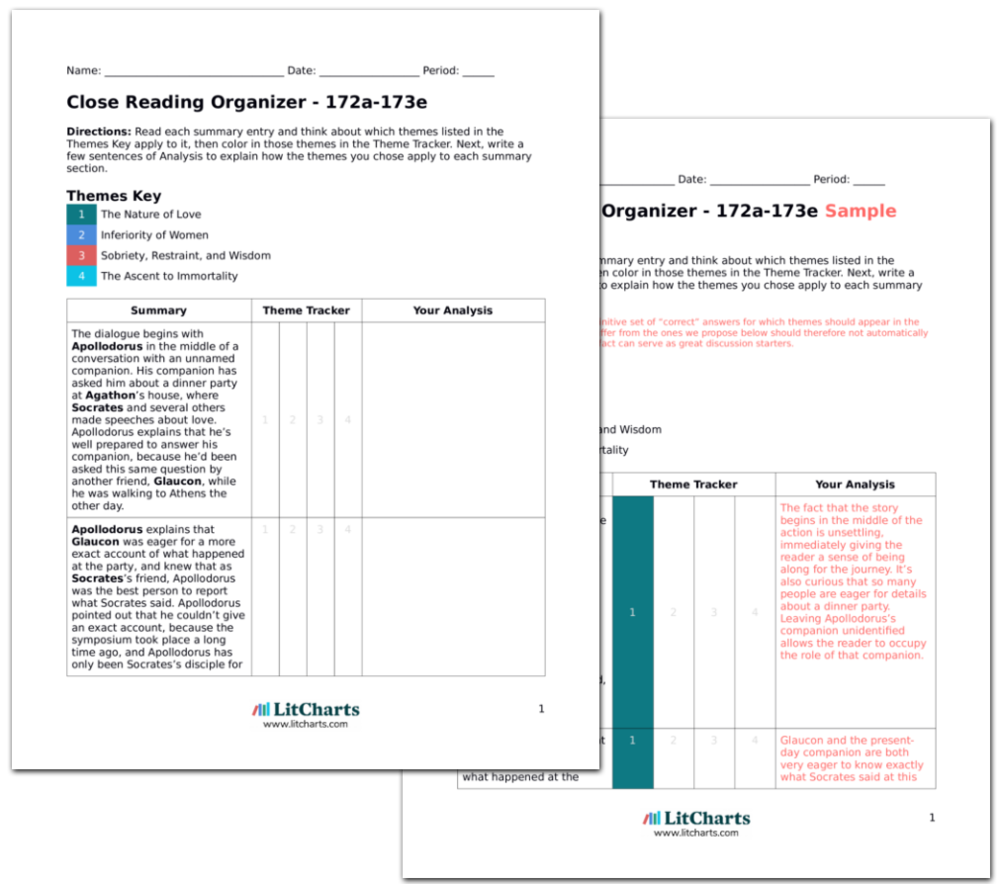