Get LitCharts A+
A Trojan woman, the daughter of Hecuba and Priam. As a young woman she was cursed by the god Apollo, and given the ability to see the future. However, her curse dictates that no one believes her prophecies, and so she is able to see events before they unfold but is unable to prevent them. Already seen as unwell before the fall of Troy, Cassandra is now considered insane by almost all who know her, her instability heightened by her imminent enslavement. However, even when caught up in fits of foresight, Cassandra remains dedicated to her family and to avenging her murdered father, brothers, and sisters.

Cassandra Quotes in The Trojan Women

The The Trojan Women quotes below are all either spoken by Cassandra or refer to Cassandra. For each quote, you can also see the other characters and themes related to it (each theme is indicated by its own dot and icon, like this one:

Poseidon: You hated Troy once; did you throw your hate away
and change to pity, now its walls are black with fire?
Athena: Come back to the question. Will you take counsel with me
and help me gladly in all that I would bring to pass?
Poseidon: I will indeed; but tell me what you wish to do.
Are you here for the Achaeans’ or the Phrygians’ sake?
Athena: For the Trojans, whom I hated this short time since,
to make the Achaeans’ homecoming a thing of sorrow.
Poseidon: This is a springing change of character. Why must
you hate too hard, and love too hard, your loves and hates?
Athena: Did you not know they outraged my temple, and shamed me?
Poseidon: I know that Ajax dragged Cassandra thence by force.
Athena: And the Achaeans did nothing. They did not even speak.

Hecuba: Who was given my child? Tell me, who shall be lord
of my poor abused Cassandra?
Talthybius: King Agamemnon chose her. She was given to him.
Hecuba: Slave woman to that Lacedaemonian wife?
My unhappy child!
Talthybius: No. Rather to be joined with him in a dark bed of love.
Hecuba: She, Apollo’s virgin, blessed in the privilege
the gold-haired god gave her, a life forever unwed?
Talthybius: Love’s archery and the prophetic maiden struck him hard.
Hecuba: Dash down, my daughter,
the twigs of your consecration,
break the god’s garland to your throat gathered.
Talthybius: Is it not high favor to be brought to a king’s bed?

But see! What is the burst of a torch flame inside?
What can it mean? Are the Trojan women setting fire
to their chambers, at point of being torn from their land
to sail for Argos? Have they set themselves aflame
in longing for death? I know it is the way of freedom
in times like these to stiffen the neck against disaster.
Open, there, open; let not the fate desired by these,
dreaded by the Achaeans, hurl their wrath on me.

O Mother, star my hair with flowers of victory.
This is a king I marry; then be glad; escort
the bride—and if she falters, thrust her strongly on.
If Loxias lives, the Achaeans’ pride, great Agamemnon
has won a wife more fatal than ever Helen was.
Since I will kill him, and avenge my brothers’ blood
and my father’s in desolation of his house.
But I leave this in silence and sing not now the axe
to drop against my throat and other throats than mine,
the agony of the mother murdered, brought to pass
from our marriage rites, and Atreus’ house made desolate.

I am ridden by god’s curse still, yet I will step so far
out of my frenzy as to show our city’s fate
is blessed beyond the Achaeans’. For one woman’s sake,
one act of love, these hunted Helen down and threw
thousands of lives away. Their general—clever man—
in the name of a vile woman cut his darling down,
gave up for a brother the sweetness of children in his house,
all to bring back that brother’s wife, a woman who went
of her free will, not caught in constraint of violence.
The Achaeans came back Scamander’s banks, and died
day after day, though none of them sought to wrench their land from them
nor their own towering cities. Those the war god caught
never saw their sons again, nor were they laid to rest
decently in winding sheets by their wives’ hands, but lie
buried in alien ground; while all went wrong at home
as the widows perished, and couples who had raised in vain
their children were left childless, no one left to tend
their tombs and give to them the sacrificial blood.
For such success as this congratulate the Greeks.
No, but the shame is better left in silence, for fear
my singing voice become the voice of wretchedness.
The Trojans have that glory which is loveliest:
they died for their own country. So the bodies of all
who took the spears were carried home in loving hands,
brought, in the land of their fathers, to the embrace of earth
and buried becomingly as the rite fell due. The rest,
those Phrygians who escaped death in battle, day by day
came home to happiness the Achaeans could not know;
their wives, their children. Then was Hector’s fate so sad?
You think so. Listen to the truth. He is dead and gone
surely, but with reputation, as a valiant man.
How could this be, except for the Achaeans’ coming?
Had they held back, none might have known how great he was. 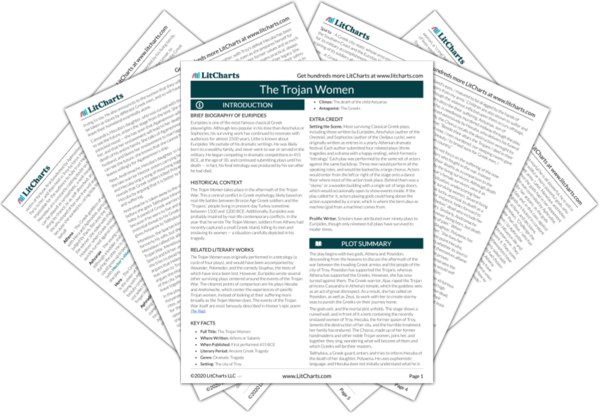 The timeline below shows where the character Cassandra appears in The Trojan Women. The colored dots and icons indicate which themes are associated with that appearance.

...including her daughter Polyxena and husband Priam—who have been killed by the Greeks—and her daughter Cassandra, who is protected by the gods but has nonetheless been claimed by Agamemnon. (full context)

...to Poseidon with a proposal to punish the Greek army. The Greek soldier, Ajax, raped Cassandra in her temple. Athena sees this as an act of great disrespect to her, especially... (full context)

Hecuba hopes that Cassandra will not come to see her in this moment. Seeing her daughter, who has been... (full context)

Hecuba wonders where her daughter Cassandra will go. Talthybius says Agamemnon has claimed her as a sex slave. Hecuba is distraught.... (full context)

Hecuba hopes Cassandra will tear the sacred garlands of the gods off of her body in protest of... (full context)

Talthybius calls forth Cassandra. He has been ordered to bring her to Agamemnon as soon as possible. Within the... (full context)

Cassandra, carrying a torch, exits the tent. She had been dancing erratically inside, which gave the... (full context)

Cassandra implores Hecuba to dance with her. She calls out to the god Apollo, and to... (full context)

The Chorus Leader asks Hecuba to stop Cassandra from dancing. Hecuba takes her torch away and gives it to the Chorus, who exit... (full context)

Cassandra begins to see her own future, and narrates it to Hecuba. She predicts that as... (full context)

Cassandra is shocked that an entire war was fought for Helen’s sake. The way she interprets... (full context)

Cassandra sees the Trojan men, who nevertheless lost the war, as the true victors, as they... (full context)

Cassandra observes that “though surely the wise man will forever shrink from war,” there is honor... (full context)

Talthybius, who is still onstage standing guard, threatens Cassandra for threatening Agamemnon. However, he lets her off with a warning because of her troubled... (full context)

Before she leaves, Cassandra delivers one final speech. She wonders why she predicted that Hecuba would die in Troy,... (full context)

Cassandra takes a moment to gather herself. She demands that Talthybius take her “quick to the... (full context)