Download this LitChart! (PDF)
Teachers and parents! Struggling with distance learning? Our Teacher Edition on The Turn of the Screw can help.

Get LitCharts A+
LitCharts assigns a color and icon to each theme in The Turn of the Screw, which you can use to track the themes throughout the work.

The Turn of the Screw explores the relationship between storytelling and the reality stories depict: can stories be trusted as representations of reality; does the telling of a story always imply some separation or distance from reality; can stories tell something true without telling explicitly the truth? These are not questions the book explicitly answers. But an argument can be made that part of Henry James’s agenda here is to argue that stories—even fictional stories—can powerfully influence the realities they depict.

The structure of this book is a good entry point into what The Turn of the Screw says about the power stories have. The Turn of the Screw begins in one setting—the old home in England where storytellers have gathered to scare each other on Christmas Eve—and then ends in a different setting, at Bly. What happened to the storytellers? Why did Henry James leave them out of the ending? This book is a fiction, so this may seem trivial. But this change from beginning to end is not due to Henry James’s carelessness as a novelist. Rather the change can be read in light of the book’s message about stories: the story in the manuscript Douglas read from overtook the reality of the gathered storytellers the book created at the beginning. James has taken an old literary technique, called a “frame narrative”, in which stories are nested within stories by a series of storytellers, and he uses this technique to show how some stories (such as the governess’s manuscript), if they are sufficiently powerful, can overtake the frames they are placed within (such as the Christmas Eve storytelling party).

The letter the governess receives from Miles’s head-master provides another good example of how stories can complicate and influence reality. The letter is an incomplete story about Miles: it says that he has been expelled from his school but it offers no explanation, and no character in the book seems willing or able to explain to the governess why Miles may have been expelled. This mysterious letter and the stories about Miles that it implies color the governess’s relationship with Miles throughout the story. Why was he expelled? Is he evil or good? Was the letter the result of a false accusation? Because she has no evidence to answer these questions, the stories this letter spawns in her mind take place in the realm of speculation. In other words, they are fiction, but they still come to define her relationship to Miles. 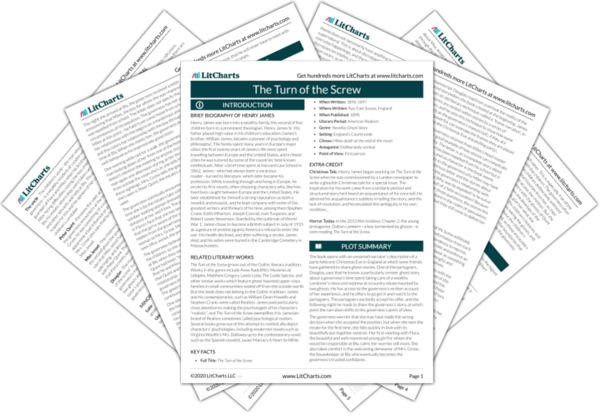 Storytelling Quotes in The Turn of the Screw

Below you will find the important quotes in The Turn of the Screw related to the theme of Storytelling.
Preface Quotes

"I quite agree—in regard to Griffin's ghost, or whatever it was—that its appearing first to the little boy, at so tender an age, adds a particular touch. But it's not the first occurrence of its charming kind that I know to have involved a child. If the child gives the effect another turn of the screw, what do you say to TWO children—?"

"Oh, it wasn't him!" Mrs. Grose with emphasis declared. "It was Quint's own fancy. To play with him, I mean—to spoil him." She paused a moment; then she added: "Quint was much too free."
This gave me, straight from my vision of his face—such a face!—a sudden sickness of disgust. "Too free with my boy?"
"Too free with everyone!"

"It's he?"
I was so determined to have all my proof that I flashed into ice to challenge him. "Whom do you mean by 'he'?"
"Peter Quint—you devil!" His face gave again, round the room, its convulsed supplication. "Where?"
…"What does he matter now, my own?—what will he EVER matter? I have you," I launched at the beast, "but he has lost you forever!" Then, for the demonstration of my work, "There, there!" I said to Miles.
But he had already jerked straight round, stared, glared again, and seen but the quiet day. With the stroke of the loss I was so proud of he uttered the cry of a creature hurled over an abyss…We were alone with the quiet day, and his little heart, dispossessed, had stopped. 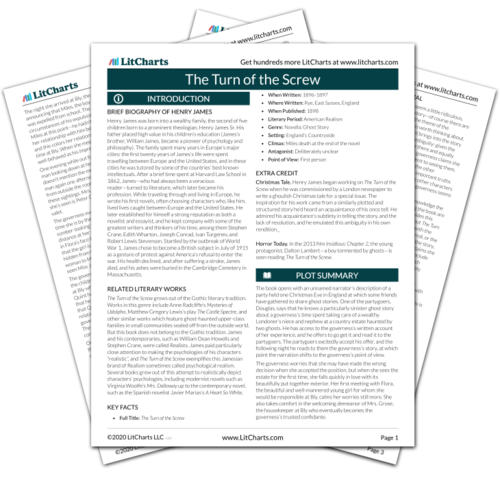 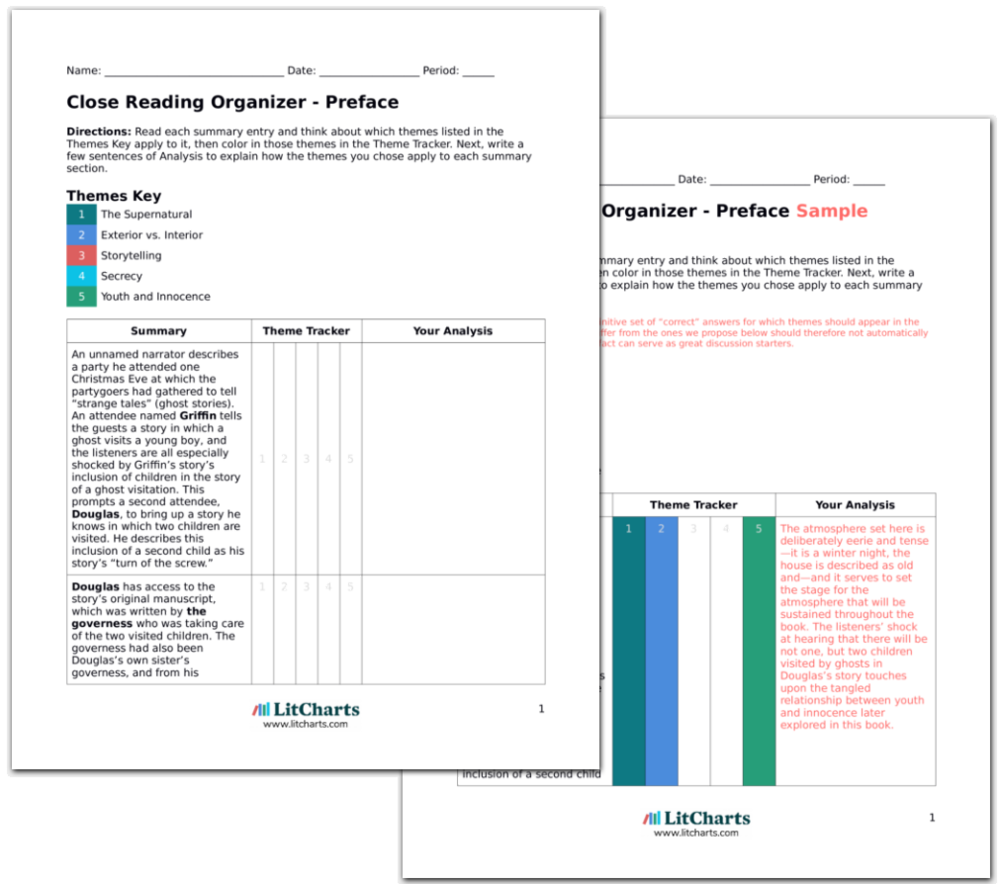