Download this LitChart! (PDF)
Teachers and parents! Struggling with distance learning? Our Teacher Edition on The Ugly American can help.

Welcome to the LitCharts study guide on Eugene Burdick and William J. Lederer's The Ugly American. Created by the original team behind SparkNotes, LitCharts are the world's best literature guides.

A concise biography of Eugene Burdick and William J. Lederer plus historical and literary context for The Ugly American.

A quick-reference summary: The Ugly American on a single page.

In-depth summary and analysis of every chapter of The Ugly American. Visual theme-tracking, too.

Explanations, analysis, and visualizations of The Ugly American's themes.

Description, analysis, and timelines for The Ugly American's characters.

Description, analysis, and timelines for The Ugly American's terms.

Explanations of The Ugly American's symbols, and tracking of where they appear.

An interactive data visualization of The Ugly American's plot and themes.

Eugene Burdick was born in Iowa, though his family moved to Los Angeles when he was a young boy. Burdick studied at Stanford University and completed his graduate studies at Oxford as a Rhodes Scholar. Between Stanford and Oxford, Burdick served in the United States Navy during World War II. After his own studies, Burdick worked for the University of California as a political scientist. Burdick made a name for himself as a writer with his award-winning short story, “Rest Camp on Maui” in 1947. Through the 1950s and 1960s, Burdick became a respected political author, penning seven major works, including The Ugly American in 1958. However, during this time he also struggled with diabetes and frequent heart trouble. He died of a heart attack in 1965, the same year that he published his second novel with William Lederer, Sarkhan. William Lederer was born in New York City. As a teenager, he dropped out of high school to enlist in the United States Navy, and within six years became a junior officer on a gunboat, the U.S.S. Tutuila. Lederer served as a naval officer in Asia and Europe during World War II. Afterward, he spent several years working as a public information officer at the Pentagon. Beginning in 1950, Lederer wrote and contributed to numerous literary and non-fiction works, writing about everything from politics to skiing to marriage to American intelligence programs. However, his greatest success came from his collaboration with Eugene Burdick on The Ugly American in 1958, in which both authors reflected their own experiences with American Foreign Service members who, in their mind, catastrophically failed in Southeast Asia. Lederer died in 2009, more than 40 years after Burdick’s untimely death.
Get the entire The Ugly American LitChart as a printable PDF.
"My students can't get enough of your charts and their results have gone through the roof." -Graham S.
Download 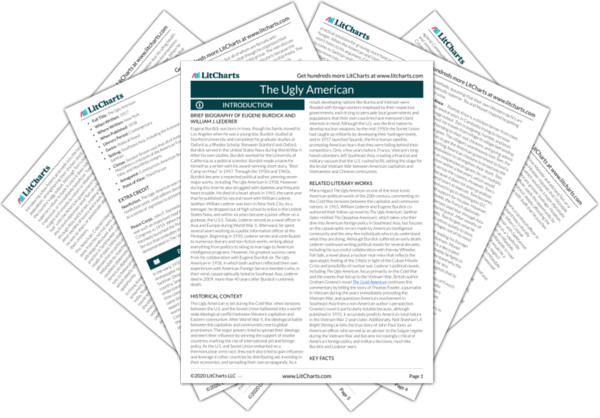 Historical Context of The Ugly American

The Ugly American is set during the Cold War, when tensions between the U.S. and the Soviet Union ballooned into a world-wide ideological conflict between Western capitalism and Eastern communism. After World War II, the ideological battle between the capitalists and communists rose to global prominence. The major powers tried to spread their ideology and exert their influence by winning the support of smaller countries, marking the rise of international aid and foreign policy. As the U.S. and Soviet Union embarked on a thermonuclear arms race, they each also tried to gain influence and leverage in other countries by distributing aid, investing in their economies, and spreading their own propaganda. As a result, developing nations like Burma and Vietnam were flooded with foreign workers employed by their respective governments, each trying to persuade local governments and populations that their own countries have everyone’s best interests in mind. Although the U.S. was the first nation to develop nuclear weapons, by the mid-1950s the Soviet Union had caught up militarily by developing their hydrogen bomb, and in 1957 launched Sputnik, the first human satellite, prompting American fears that they were falling behind their competitors. Only a few years before, France, Vietnam’s long-hated colonizers, left Southeast Asia, creating a financial and military vacuum that the U.S. rushed to fill, setting the stage for the brutal Vietnam War between American capitalists and Vietnamese and Chinese communists.

Other Books Related to The Ugly American

Many regard The Ugly American as one of the most iconic American political novels of the 20th century, commenting on the Cold War tensions between the capitalist and communist nations. In 1965, William Lederer and Eugene Burdick co-authored their follow-up novel to The Ugly American, Sarkhan (later retitled The Deceptive American), which takes a further dive into American foreign policy in Southeast Asia, but focuses on the catastrophic errors made by America’s intelligence community and the very few individuals who truly understand what they are doing. Although Burdick suffered an early death, Lederer continued writing political novels for several decades, including his successful collaboration with Harvey Wheeler, Fail-Safe, a novel about a nuclear near-miss that reflects the apocalyptic feeling of the 1960s in light of the Cuban Missile Crisis and possibility of nuclear war. Lederer’s political novels, including The Ugly American, focus primarily on the Cold War and the events that led up to the Vietnam War. British author Graham Greene’s novel The Quiet American continues this commentary by telling the story of Thomas Fowler, a journalist in Vietnam during the years immediately preceding the Vietnam War, and questions America’s involvement in Southeast Asia from a non-American author’s perspective. Greene’s novel is particularly notable because, although published in 1955, it accurately predicts America’s total failure in the Vietnam War 2 years later. Additionally, Neil Sheehan’s A Bright Shining Lie tells the true story of John Paul Vann, an American officer who served as an adviser to the Saigon regime during the Vietnam War and became increasingly critical of America’s foreign policy and military decisions, much like Burdick and Lederer were.
Key Facts about The Ugly American

Extra Credit for The Ugly American

Nonfiction. The Ugly American was originally proposed as a nonfiction work, until editors decided that it would work better as a series of vignettes to present the author’s arguments.

Peace Corps. John F. Kennedy thought that The Ugly American was such an important read that he sent copies to everyone in Congress in 1959. When he became president a year later, Kennedy launched the Peace Corps, a new arm of the Foreign Service that embodies the grassroots development ethic demonstrated in The Ugly American. 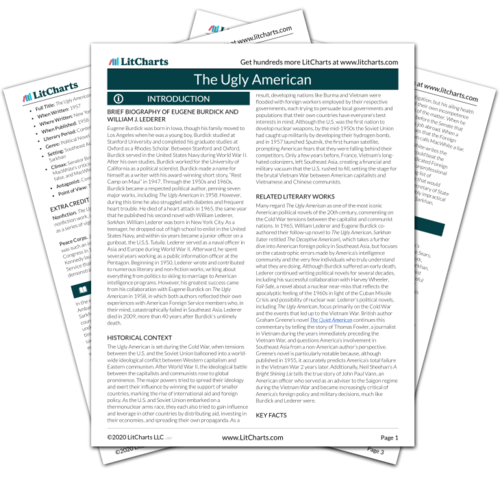 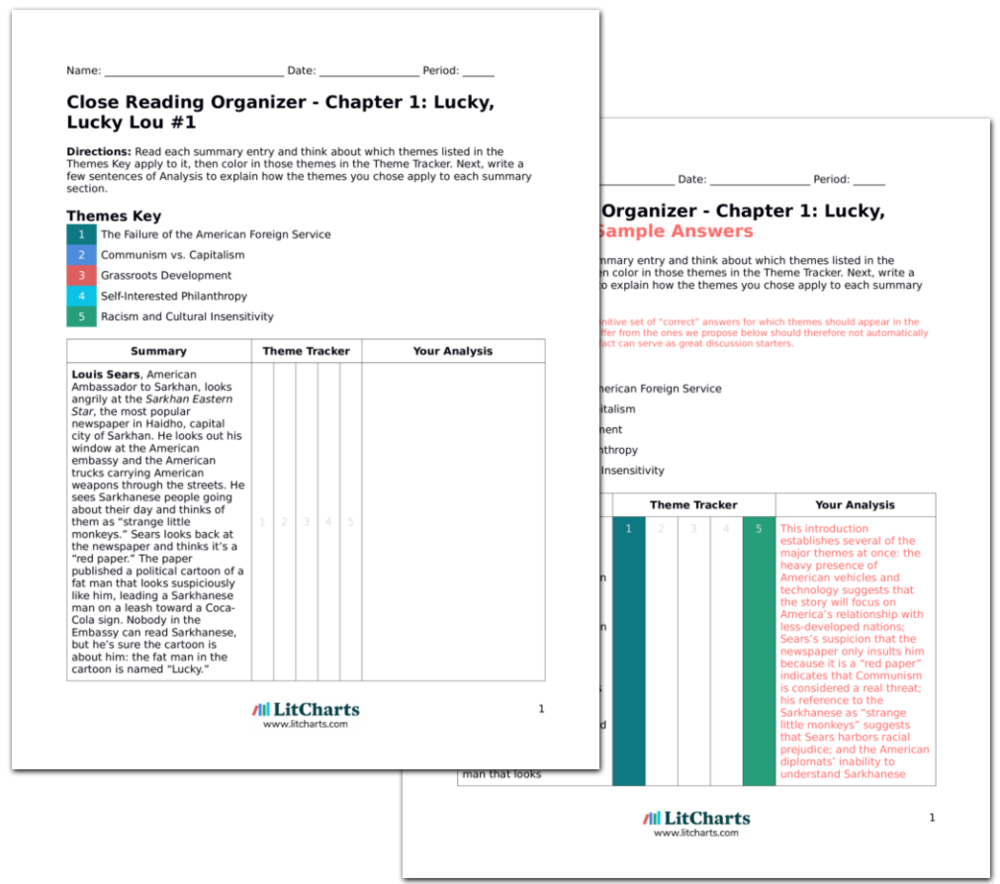