Download this LitChart! (PDF)
Teachers and parents! Struggling with distance learning? Our Teacher Edition on The Village Schoolmaster can help.

Welcome to the LitCharts study guide on Franz Kafka's The Village Schoolmaster. Created by the original team behind SparkNotes, LitCharts are the world's best literature guides.

A concise biography of Franz Kafka plus historical and literary context for The Village Schoolmaster.

A quick-reference summary: The Village Schoolmaster on a single page.

In-depth summary and analysis of every of The Village Schoolmaster. Visual theme-tracking, too.

Explanations, analysis, and visualizations of The Village Schoolmaster's themes.

The Village Schoolmaster's important quotes, sortable by theme, character, or .

Description, analysis, and timelines for The Village Schoolmaster's characters.

Explanations of The Village Schoolmaster's symbols, and tracking of where they appear.

An interactive data visualization of The Village Schoolmaster's plot and themes.

The son of a prosperous Jewish retail merchant, Franz Kafka received the classical education typical of a middle-class child in Prague, complete with training in Latin and Greek. He studied law at university before working in local insurance firms—a profession which was stable but not at all to his taste. His real calling, he felt, was literature, an ambition which placed considerable strain on his relationship with his domineering father. He spent a great deal of his time writing, and he published his first book of short stories, Contemplation, in 1912 at age 30. This was soon followed by The Trial in 1914—the surreal drama of a legal system gone wrong—and The Metamorphosis in 1915—likely his best-known work, in which a man spontaneously transforms into an insect. By 1917, Kafka was suffering from the tuberculosis that would eventually claim his life. He spent his remaining seven years in and out of sanitariums. Much of his work—including The Castle (1926) and many short stories—appeared only posthumously, and in varying states of completion. His fixation on nightmarish scenarios and human powerlessness, his insight into the mind, and his combination of surreal elements with dry realism created some of the most memorable psychological portraits of the 20th century.
Get the entire The Village Schoolmaster LitChart as a printable PDF.
"My students can't get enough of your charts and their results have gone through the roof." -Graham S.
Download 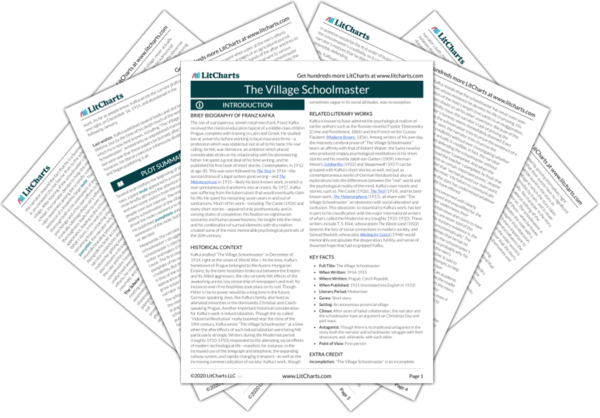 Historical Context of The Village Schoolmaster

Kafka drafted “The Village Schoolmaster” in December of 1914, right at the onset of World War I. At the time, Kafka’s hometown of Prague belonged to the Austro-Hungarian Empire; by the time hostilities broke out between the Empire and its Allied aggressors, the city certainly felt effects of the awakening unrest (via censorship of newspapers and mail, for instance) even if no hostilities took place on its soil. Though Hitler’s rise to power would be a long time in the future, German-speaking Jews, like Kafka’s family, also lived as alienated minorities in the dominantly Christian and Czech-speaking Prague. Another important historical consideration for Kafka’s work is industrialization. Though the so-called “Industrial Revolution” really boomed near the close of the 19th century, Kafka wrote “The Village Schoolmaster” at a time when the aftereffects of such industrialization were being felt particularly strongly. Writers during the Modernist period (roughly 1910-1950) responded to the alienating social effects of modern technological life—manifest, for instance, in the increased use of the telegraph and telephone, the expanding railway system, and rapidly changing transport—as well as the increasing commercialization of society; Kafka’s work, though sometimes vague in its social attitudes, was no exception.

Other Books Related to The Village Schoolmaster

Kafka is known to have admired the psychological realism of earlier authors such as the Russian novelist Fyodor Dostoevsky (Crime and Punishment, 1866) and the French writer Gustav Flaubert (Madame Bovary, 1856). Among writers of his own day, the intensely cerebral prose of “The Village Schoolmaster” bears an affinity with that of Robert Walser, the Swiss novelist who produced snappy psychological meditations in his short stories and his novella Jakob von Gunten (1909). Herman Hesse’s Siddhartha (1922) and Steppenwolf (1927) can be grouped with Kafka’s short stories as well, not just as contemporaneous works of German literature but also as explorations into the differences between the “real” world and the psychological reality of the mind. Kafka’s own novels and stories, such as The Castle (1926), The Trial (1914), and his best-known work, The Metamorphosis (1915), all share with “The Village Schoolmaster” an obsession with social alienation and confusion. This obsession, so essential to Kafka’s work, has led in part to his classification with the major international writers of what’s called the Modernist era (roughly 1910-1950). These writers include T. S. Eliot, whose poem The Waste Land (1922) laments the loss of social connections in modern society, and Samuel Beckett, whose play Waiting for Godot (1948) would memorably encapsulate the desperation, futility, and sense of thwarted hope that had so gripped Kafka.
Key Facts about The Village Schoolmaster

Extra Credit for The Village Schoolmaster

Incompletion. “The Village Schoolmaster” is an incomplete work. As far as people know, Kafka wrote the current draft in one night, on December 16, 1914, and abandoned it the following January.

Last wishes. Kafka published several books and stories in his lifetime, but by the time of his death much of the work for which he is now best known, including “The Village Schoolmaster,” existed only as unpublished manuscripts. His last wish was that these papers be burned; after Kafka’s death, however, his literary executor infamously disobeyed this order and began publishing it all. 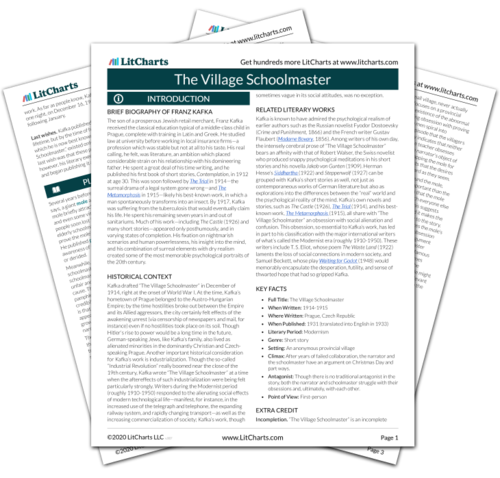 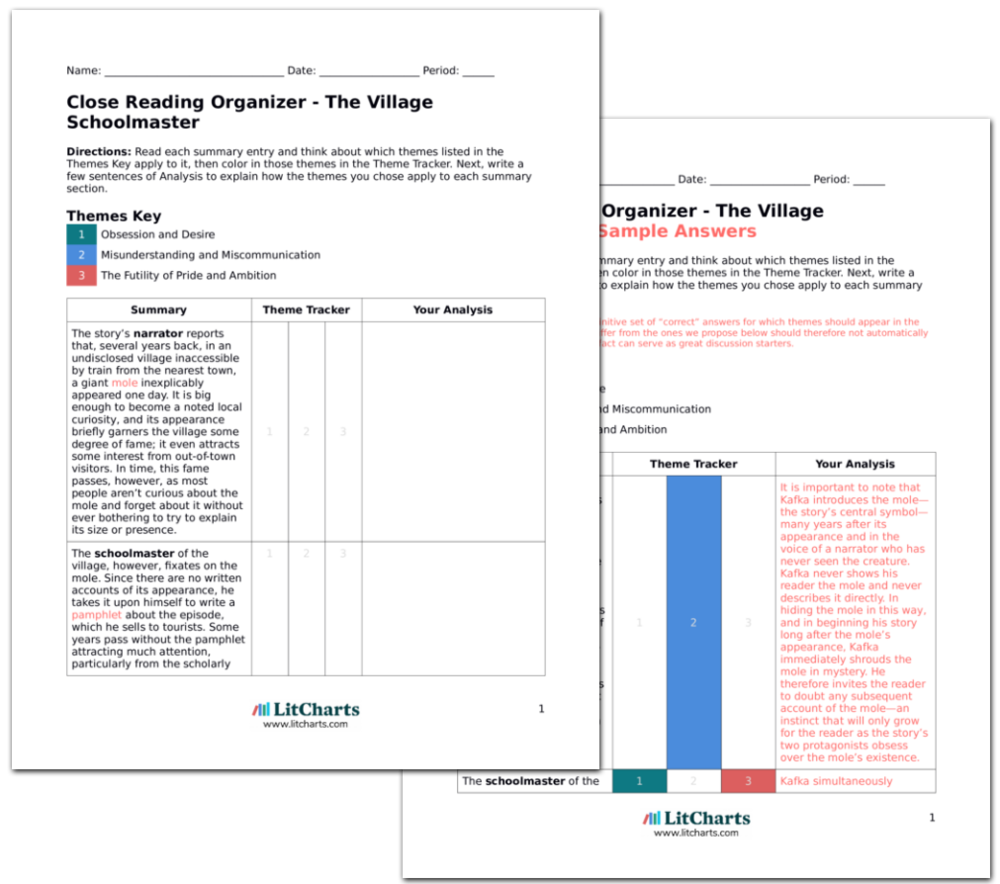