Download this LitChart! (PDF)
Teachers and parents! Struggling with distance learning? Our Teacher Edition on The Wave can help.

Welcome to the LitCharts study guide on Todd Strasser's The Wave. Created by the original team behind SparkNotes, LitCharts are the world's best literature guides.

A concise biography of Todd Strasser plus historical and literary context for The Wave.

A quick-reference summary: The Wave on a single page.

In-depth summary and analysis of every chapter of The Wave. Visual theme-tracking, too.

Explanations, analysis, and visualizations of The Wave's themes.

The Wave's important quotes, sortable by theme, character, or chapter.

Description, analysis, and timelines for The Wave's characters.

Explanations of The Wave's symbols, and tracking of where they appear.

An interactive data visualization of The Wave's plot and themes.

Todd Strasser, a native of New York City and an alum of Wisconsin’s Benoit College, is the author of several popular books for children and young adults, many of which are novelizations of television shows and movies including Jumanji and Ferris Bueller’s Day Off. The Wave is without a doubt his best-known work, but many readers may be surprised to learn that it, too, is actually a novelization of a 1981 ABC television special. The television special was itself inspired by the “Third Wave” teaching experiment that took place at a Palo Alto high school in 1981. Strasser’s novels have also been adapted into films—for example, 1996’s How I Created My Perfect Prom Date was adapted into the popular 1999 teen flick Drive Me Crazy. Strasser’s work has on occasion been regarded as controversial and criticized for being racially insensitive, and his novel American Terrorist—which many pre-publication reviewers saw as Islamophobic—was pulled from publisher Simon & Schuster’s publication lineup in 2016. Strasser lives with his wife in Westchester County, New York.
Get the entire The Wave LitChart as a printable PDF.
"My students can't get enough of your charts and their results have gone through the roof." -Graham S.
Download 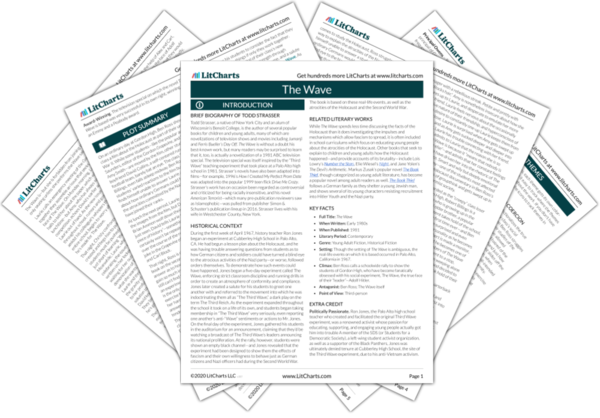 Historical Context of The Wave

During the first week of April 1967, history teacher Ron Jones began an experiment at Cubberley High School in Palo Alto, CA. He had begun a lesson plan about the Holocaust, and he was having trouble answering questions from students as to how German citizens and soldiers could have turned a blind eye to the atrocious activities of the Nazi party—or worse, followed orders themselves. To demonstrate how such events could have happened, Jones began a five-day experiment called The Wave, enforcing strict classroom discipline and running drills in order to create an atmosphere of conformity and compliance. Jones later created a salute for his students to greet one another with and referred to the movement into which he was indoctrinating them all as “The Third Wave,” a dark play on the term The Third Reich. As the experiment expanded throughout the school it took on a life of its own, and students began taking membership in “The Third Wave” very seriously, even reporting one another’s anti-“Wave” sentiments or actions to Mr. Jones. On the final day of the experiment, Jones gathered his students in the auditorium for an announcement, claiming that they’d be watching a broadcast of The Third Wave’s leaders announcing its national proliferation. At the rally, however, students were shown an empty black channel—and Jones revealed that the experiment had been designed to show them the effects of fascism and their own willingness to behave just as German citizens and Nazi officers had during the Second World War. The book is based on these real-life events, as well as the atrocities of the Holocaust and the Second World War.

Other Books Related to The Wave

While The Wave spends less time discussing the facts of the Holocaust than it does investigating the impulses and mechanisms which allow fascism to spread, it is often included in school curriculums which focus on educating young people about the atrocities of the Holocaust. Other books that seek to explain to children and young adults how the Holocaust happened—and provide accounts of its brutality—include Lois Lowry’s Number the Stars, Elie Wiesel’s Night, and Jane Yolen’s The Devil’s Arithmetic. Markus Zusak’s popular novel The Book Thief, though categorized as young adult literature, has become a popular novel among adult readers as well. The Book Thief follows a German family as they shelter a young Jewish man, and shows several of its young characters resisting recruitment into Hitler Youth and the Nazi party.
Key Facts about The Wave

Extra Credit for The Wave

Politically Passionate. Ron Jones, the Palo Alto high school teacher who created and facilitated the original Third Wave experiment, was a renowned activist whose passion for educating, supporting, and engaging young people actually got him into trouble A member of the SDS (or Students for a Democratic Society), a left-wing student activist organization, as well as a supporter of the Black Panthers, Jones was ultimately denied tenure at Cubberley High School, the site of the Third Wave experiment, due to his anti-Vietnam activism.

Award-Winning. The television special on which the novel The Wave is based was very successful in its own right, winning both an Emmy and a Peabody award. 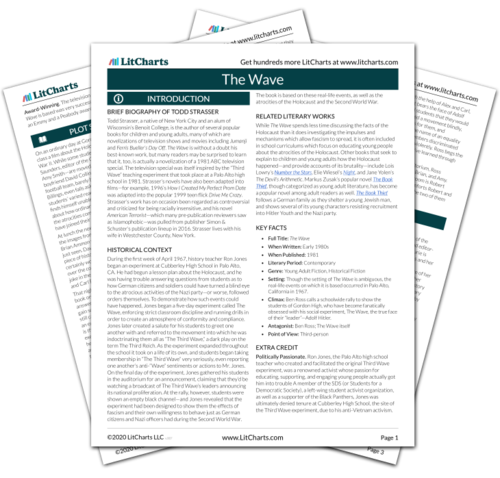 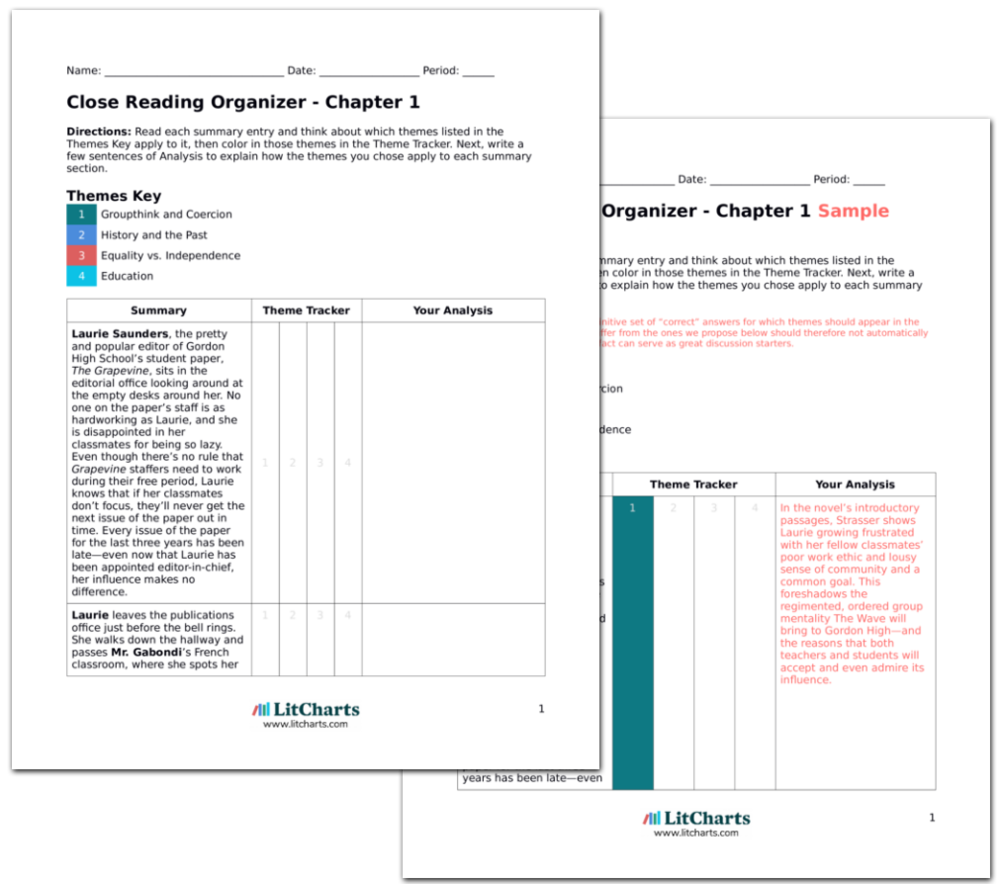