Download this LitChart! (PDF)
Teachers and parents! Struggling with distance learning? Our Teacher Edition on The Westing Game can help.

Welcome to the LitCharts study guide on Ellen Raskin's The Westing Game. Created by the original team behind SparkNotes, LitCharts are the world's best literature guides.

A concise biography of Ellen Raskin plus historical and literary context for The Westing Game.

A quick-reference summary: The Westing Game on a single page.

In-depth summary and analysis of every chapter of The Westing Game. Visual theme-tracking, too.

Explanations, analysis, and visualizations of The Westing Game's themes.

Description, analysis, and timelines for The Westing Game's characters.

Explanations of The Westing Game's symbols, and tracking of where they appear.

An interactive data visualization of The Westing Game's plot and themes.

Born and raised in Milwaukee, Wisconsin—a place that went on to inform her fiction over the course of her career—Ellen Raskin grew up during the Great Depression. After attending college at the University of Wisconsin–Madison and majoring in fine art, Raskin began a prolific career as a writer and illustrator of children’s books. Raskin’s own novels include The Westing Game, which won the 1979 American Library Association’s Newberry Medal for the year’s most distinguished children’s book, as well as The Mysterious Disappearance of Leon (I Mean Noel), Figgs & Phantoms, and The Tattooed Potato and Other Clues. She also wrote and illustrated 12 picture books between 1967 and 1976. Additionally, Raskin is well-known for creating the original cover art for the first edition of Madeline L’Engle’s A Wrinkle In Time. The designer of over a thousand dust jackets throughout her long career as a commercial artist, Raskin’s mystery novels and playful illustrations have delighted young readers for decades. Her satirical work is often rooted in themes of family, mismatched identities, and the search for (or the corruption of) the American Dream. Raskin drew inspiration for her illustrations and her stories from wide-ranging topics and figures such as East Asian art, zoos, sporting events, Vladimir Nabokov, Henri Matisse, William Blake, and Walt Disney’s Fantasia. Raskin died in 1984, at the age of 54, from complications of a connective-tissue disease.
Get the entire The Westing Game LitChart as a printable PDF.
"My students can't get enough of your charts and their results have gone through the roof." -Graham S.
Download 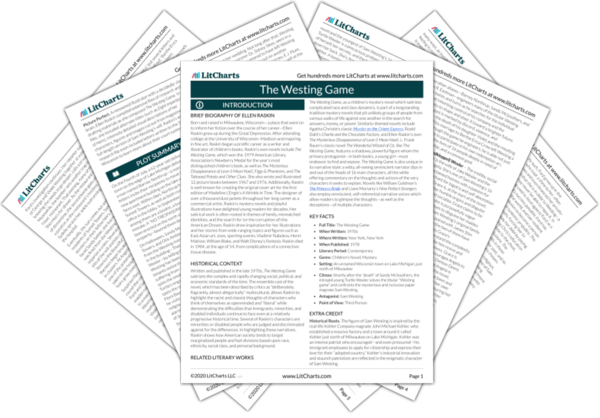 Historical Context of The Westing Game

Written and published in the late 1970s, The Westing Game satirizes the complex and rapidly changing social, political, and economic standards of the time. The ensemble cast of the novel, which has been described by critics as “deliberately, flagrantly, almost allegorically” multicultural, allows Raskin to highlight the racist and classist thoughts of characters who think of themselves as openminded and “liberal” while demonstrating the difficulties that immigrants, minorities, and disabled individuals continue to face even at a relatively progressive historical time. Several of Raskin’s characters are minorities or disabled people who are judged and discriminated against for the differences. In highlighting these narratives, Raskin shows how American society tends to target marginalized people and fuel divisions based upon race, ethnicity, social class, and personal background.

Other Books Related to The Westing Game

The Westing Game, as a children’s mystery novel which satirizes complicated race and class dynamics, is part of a longstanding tradition mystery novels that pit unlikely groups of people from various walks of life against one another in the search for answers, money, or power. Similarly-themed novels include Agatha Christie’s classic Murder on the Orient Express, Roald Dahl’s Charlie and the Chocolate Factory, and Ellen Raskin’s own The Mysterious Disappearance of Leon (I Mean Noel). L. Frank Baum’s classic novel The Wonderful Wizard of Oz, like The Westing Game, features a shadowy, powerful figure whom the primary protagonist—in both books, a young girl—must endeavor to find and expose. The Westing Game is also unique in its narrative style: a witty, all-seeing omniscient narrator dips in and out of the heads of 16 main characters, all the while offering commentary on the thoughts and actions of the very characters it seeks to explain. Novels like William Goldman’s The Princess Bride and Liane Moriarty’s Nine Perfect Strangers also employ omniscient, self-referential narrative voices which allow readers to glimpse the thoughts—as well as the deceptions—of multiple characters.
Key Facts about The Westing Game

Extra Credit for The Westing Game

Historical Roots. The figure of Sam Westing is inspired by the real-life Kohler Company magnate John Michael Kohler, who established a massive factory and a town around it called Kohler just north of Milwaukee on Lake Michigan. Kohler was an intense patriot who encouraged—and even pressured—his immigrant employees to apply for citizenship and express their love for their “adopted country.” Kohler’s industrial innovation and staunch patriotism are reflected in the enigmatic character of Sam Westing.

Picture Perfect. A renowned illustrator with a decidedly visual brain, Ellen Raskin compiled extensive files of research and drafting materials as she composed The Westing Game. In these files, she included alternate titles (such as Eight Imperfect Pairs of Heirs), intensely detailed visual descriptions of her characters, figures and images cut out from magazines, and a full-length version of Sam Westing’s will. Raskin’s wide-ranging research file even included letters written to the State of Wisconsin to learn more about their court system. 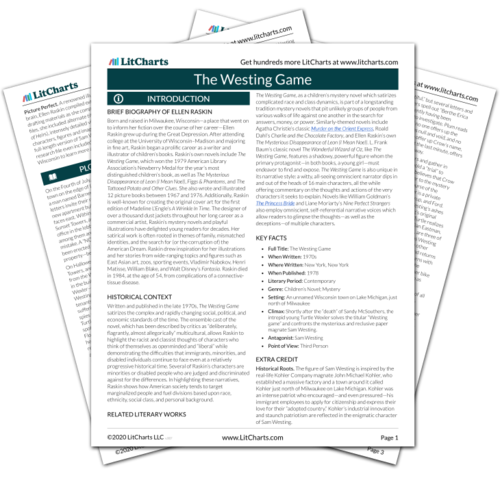 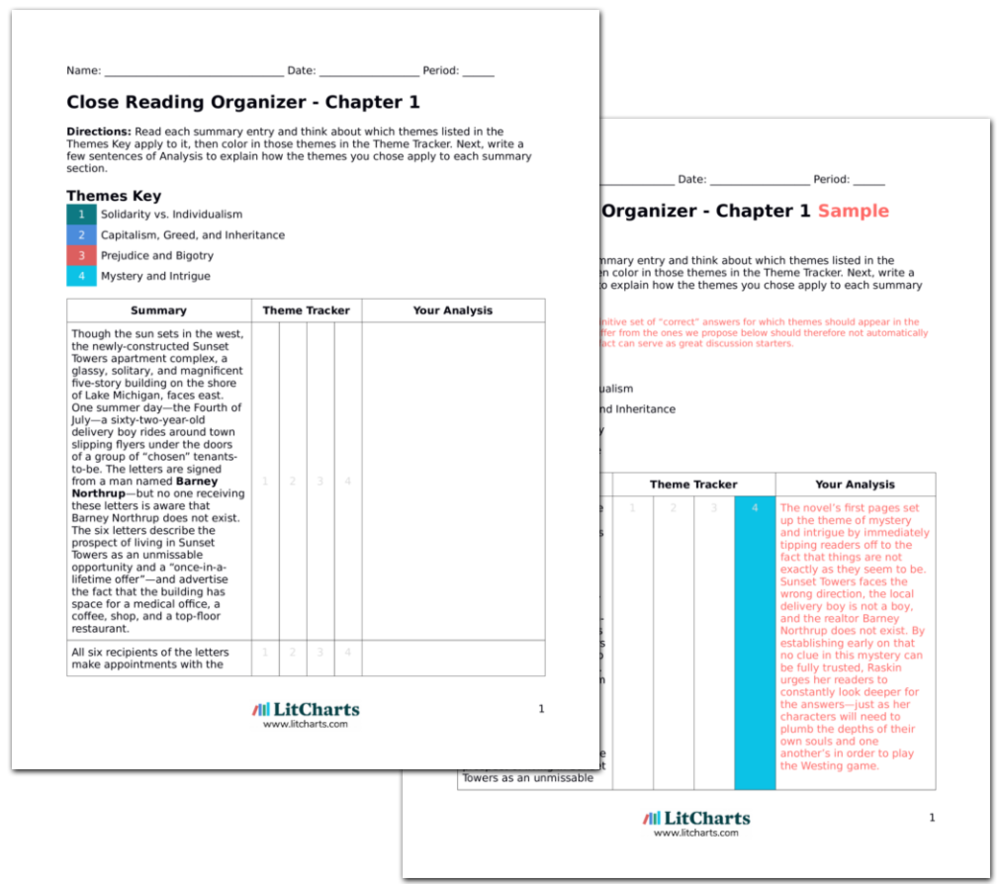