Get LitCharts A+
James is Mrs. and Mr. McPherson’s son and Adelaide and Ellen’s brother. He lives in New York with his wife, Maude, who everyone knows doesn’t like Mrs. McPherson. Like his sisters, James always hated family life on their ranch in Colorado and wants to wrap up his father’s affairs as quickly as possible so that he can return to his life back east. After the funeral, James makes empty offers that he and Maude would be happy to let Mrs. McPherson live in their home, though he would clearly prefer to provide financial support and nothing more. He is willing to pay for his mother’s clothes, food, and other essentials, but he isn’t willing to commit to the emotional labor of caring for her daily. This task, he thinks, is better suited for one of his sisters. James is seemingly more concerned with his inheritance and the value of his father’s property than he is with his mother’s well-being, as he calculates and re-calculates how much he expects everything will be worth. Rather than mourning his father’s death, he regards the funeral as a business transaction. James is shocked and concerned when his mother announces her intentions to keep the ranch, which now belongs to her, and live independently. He condescendingly tries to convince her to instead sign the property over to him so that he can distribute it as was written in his father’s will, and he’s baffled when she refuses.

The The Widow’s Might quotes below are all either spoken by James or refer to James. For each quote, you can also see the other characters and themes related to it (each theme is indicated by its own dot and icon, like this one:

“Perhaps if she stayed with me, you could—help some,” suggested Ellen.

“Of course, of course, I could do that,” he agreed with evident relief. “She might visit between you –take turns—and I could pay her board. About how much ought it to amount to? We might as well arrange everything now.”

“Things cost awfully these days,” Ellen said with a crisscross of fine wrinkles on her pale forehead. “But, of course it would be only just what it costs. I shouldn’t want to make anything.”

“It’s work and care, Ellen, and you may as well admit it.”

Ellen looked out across the dusty stretches of land.

“How I did hate to live here!” she said.

And they all three smiled rather grimly.

“We don’t any of us seem to be very—affectionate, about mother,” Adelaide presently admitted, “I don’t know why it is—we never were an affectionate family, I guess”

“Nobody could be affectionate with Father,” Ellen suggested timidly.

“And Mother—poor Mother! She’s had an awful life.”

“Mother has always done her duty,” said James in a determined voice, “and so did Father, as he saw it. Now we’ll do ours.”

“I have no children, Mr. Frankland. I have two daughters and a son. Those two grown persons here, grown up, married, having children of their own—or ought to have—were my children. I did my duty by them, and they did their duty by me—and would yet, no doubt.” The tone changed suddenly. “But they don’t have to. I’m tired of duty.” The little group of listeners looked up, startled.

With a firm swift step, the tall figure moved to the window and pulled up the lowered shades. The brilliant Colorado sunshine poured into the room. She threw off the long black veil.

“That’s borrowed,” she said. “I didn’t want to hurt your feelings at the funeral.”

She unbuttoned the long black cloak and dropped it at her feet, standing there in the full sunlight, a little flushed and smiling, dressed in a well-made traveling suit of dull mixed colors.

“Where do you mean to go, Mother?” James asked.

She looked around the little circle with a serene air of decision and replied.

“To New Zealand. I’ve always wanted to go there,” she pursued. “Now I’m going. And to Australia—and Tasmania—and Madagascar—and Terra del Fuego. I shall be gone some time.”

They separated that night—three going East, one West.

Unlock with LitCharts A+
Get the entire The Widow’s Might LitChart as a printable PDF.
"My students can't get enough of your charts and their results have gone through the roof." -Graham S.
Download 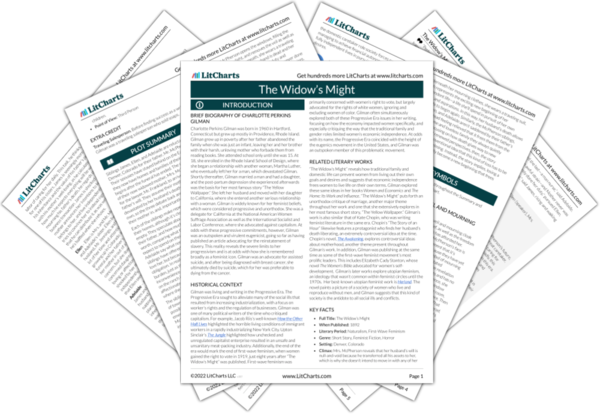 The timeline below shows where the character James appears in The Widow’s Might. The colored dots and icons indicate which themes are associated with that appearance.

James is at a funeral that his wife, Maude, cannot attend because she has to watch... (full context)

James looks at both his sisters and asks how old their mother is. Ellen replies that... (full context)

...cost of providing clothes. Immediately, she backtracks, explaining that her husband would mind that expense. James insists that their mother must be well cared for and then asks how much the... (full context)

James regards Ellen gratefully and asks her to make an estimate of how much board and... (full context)

Ellen insists that either she or Adelaide can take their mother in, and if James is willing to pay, he’ll be spared the effort of caring for her. She suggests... (full context)

James insists that they shouldn’t disrespect his memory with this kind of talk. Ellen changes the... (full context)

James says that their mother has earned her rest, and he wonders how quickly they’ll be... (full context)

...be affectionate with their father. Adelaide exclaims that their mother lived a terrible life, but James defends both their mother and father, insisting that they admirably upheld their duties as parents.... (full context)

...again with a furrowed brow, goes back downstairs to let the others know. Adelaide and James exchange glances as Mr. Frankland jumps right in to reading the will. (full context)

...to the three siblings in four equal parts. Two of those parts are left to James, while Ellen and Adelaide are to receive one each. The will states that the three... (full context)

James clears his throat. He tells his mother that this revelation complicates the siblings’ original plan... (full context)

Mrs. McPherson agrees that she has been packing. James concedes that it was safer for the property to be in her name but that... (full context)

James adds that the affairs must be settled right away. Mrs. McPherson replies that everything is... (full context)

James asks if she doesn’t need all this money for herself. She explains she doesn’t because... (full context)

...look stunned and try to interject, suggesting that she’s too old for such a plan. James frowns in a way that makes him look like his father. (full context) 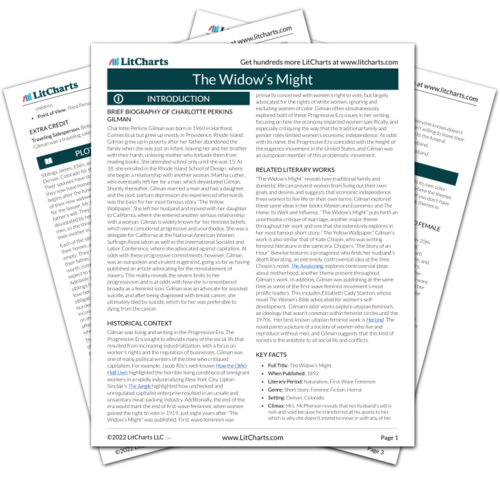