Issues of loyalty, fidelity, and honesty are crucial to the play’s main plot points. Camillo’s exile from and return to Sicilia, for example, are based on his presumed disloyalty and actual loyalty to his king Leontes. And Hermione’s perceived lack of marital fidelity is what causes Leontes to order for her death. There is a variety of different kinds of loyalty in the play, all doubted at various points: fidelity in marriage (as between Hermione and Leontes), trust in friendship (as between Leontes and Polixenes), and loyalty to one’s family (as between Florizell and his father Polixenes).

Several characters in the play think that they are upholding the importance of loyalty or punishing disloyalty, only to find that they are in some way doing the exact opposite. Leontes thinks that he is championing the importance of marital fidelity and honesty when he tries to arrange for the deaths of Hermione, Polixenes, and Perdita, but in turning on his own family and dear friend he actually displays a lack of loyalty to them. His paranoia and descent into obsessive jealousy is a betrayal of both his wife Hermione and his childhood friend Polixenes. Later in the play, Polixenes similarly tries to enforce an idea of honesty and loyalty, when he stops his son from trying to marry Perdita without his knowledge. He thinks Florizell is being a dishonest or disloyal son, but Florizell is only being honest to his feelings of genuine love for Perdita. And as Polixenes’ insistence on the matter drives his own son away from his homeland, his behavior can perhaps even be seen as a form of paternal disloyalty. As Leontes and Polixenes both demonstrate, upholding loyalty and honesty is not always a straightforward matter. Thus, Camillo, one of the few characters to be honest and virtuous throughout the play, faces a difficult dilemma when ordered by Leontes to kill Polixenes: he can either kill an innocent man and remain loyal to his king, or betray his king in order to remain loyal to a larger idea of virtue. Similarly, Antigonus is forced to abandon the helpless infant Perdita in Bohemia out of loyalty to Leontes’ commands.

Throughout the play, then, those who attempt to uphold loyalty most vigorously end up committing the play’s most heinous acts, while those who actually behave with true fidelity and honesty (Camillo, for example) must commit apparent acts of betrayal. Thus, while the play revolves around the importance of various forms of loyalty, it shows that such matters are never simple: loyalty can be a matter of perspective, and must be balanced against other forms of honesty, duty, and virtue.

Loyalty, Fidelity, and Honesty Quotes in The Winter's Tale

Below you will find the important quotes in The Winter's Tale related to the theme of Loyalty, Fidelity, and Honesty.
Act 1, Scene 2 Quotes

Too hot, too hot!
To mingle friendship far is mingling bloods.
I have tremor cordis on me: my heart dances;
But not for joy; not joy. This entertainment
May a free face put on, derive a liberty
From heartiness, from bounty, fertile bosom,
And well become the agent; 't may, I grant;
But to be paddling palms and pinching fingers,
As now they are, and making practised smiles
As in a looking-glass, and then to sigh, as 'twere
The mort o' the deer; O, that is entertainment
My bosom likes not, nor my brows! Mamillius,
Art thou my boy?

Ha' not you seen, Camillo, —
But that's past doubt, you have, or your eye-glass
Is thicker than a cuckold's horn, —or heard, —
—For to a vision so apparent rumour
Cannot be mute, —or thought, —for cogitation
Resides not in that man that does not think, —
My wife is slippery?

Mark and perform it, see'st thou! for the fail
Of any point in't shall not only be
Death to thyself but to thy lewd-tongued wife,
Whom for this time we pardon. We enjoin thee,
As thou art liege-man to us, that thou carry
This female bastard hence and that thou bear it
To some remote and desert place quite out
Of our dominions, and that there thou leave it,
Without more mercy, to its own protection
And favour of the climate. As by strange fortune
It came to us, I do in justice charge thee
On thy soul's peril and thy body's torture
That thou commend it strangely to some place
Where chance may nurse or end it. Take it up.

Since what I am to say must be but that
Which contradicts my accusation and
The testimony on my part no other
But what comes from myself, it shall scarce boot me
To say 'not guilty:' mine integrity
Being counted falsehood, shall, as I express it
Be so received. But thus: if powers divine
Behold our human actions, as they do,
I doubt not then but innocence shall make
False accusation blush and tyranny
Tremble at patience.

For Polixenes,
With whom I am accused, I do confess
I loved him as in honour he required,
With such a kind of love as might become
A lady like me, with a love even such,
So and no other, as yourself commanded:
Which not to have done I think had been in me
Both disobedience and ingratitude
To you and toward your friend, whose love had spoke,
Even since it could speak, from an infant, freely
That it was yours. Now, for conspiracy,
I know not how it tastes; though it be dish'd
For me to try how: all I know of it
Is that Camillo was an honest man;
And why he left your court, the gods themselves,
Wotting no more than I, are ignorant.

O, think what they have done
And then run mad indeed, stark mad! for all
Thy by-gone fooleries were but spices of it.
That thou betray'dst Polixenes,'twas nothing;
That did but show thee, of a fool, inconstant
And damnable ingrateful: nor was't much,
Thou wouldst have poison'd good Camillo's honour,
To have him kill a king: poor trespasses,
More monstrous standing by: whereof I reckon
The casting forth to crows thy baby-daughter
To be or none or little; though a devil
Would have shed water out of fire ere done't:
Nor is't directly laid to thee, the death
Of the young prince, whose honourable thoughts,
Thoughts high for one so tender, cleft the heart
That could conceive a gross and foolish sire
Blemish'd his gracious dam: this is not, no,
Laid to thy answer: but the last, —O lords,
When I have said, cry 'woe!' the queen, the queen,
The sweet'st, dear'st creature's dead,
and vengeance for't
Not dropp'd down yet.

POLIXENES
Mark your divorce, young sir,
Whom son I dare not call; thou art too base
To be acknowledged: thou a sceptre's heir,
That thus affect'st a sheep-hook! Thou old traitor,
I am sorry that by hanging thee I can
But shorten thy life one week. And thou, fresh piece
Of excellent witchcraft, who of force must know
The royal fool thou copest with, —

POLIXENES
I'll have thy beauty scratch'd with briers, and made
More homely than thy state. For thee, fond boy,
If I may ever know thou dost but sigh
That thou no more shalt see this knack, as never
I mean thou shalt, we'll bar thee from succession;
Not hold thee of our blood, no, not our kin,
Far than Deucalion off: mark thou my words:
Follow us to the court. Thou churl, for this time,
Though full of our displeasure, yet we free thee
From the dead blow of it. And you, enchantment.—
Worthy enough a herdsman: yea, him too,
That makes himself, but for our honour therein,
Unworthy thee, —if ever henceforth thou
These rural latches to his entrance open,
Or hoop his body more with thy embraces,
I will devise a death as cruel for thee
As thou art tender to't.

Ha, ha! what a fool Honesty is! and Trust, his
sworn brother, a very simple gentleman!

O, peace, Paulina!
Thou shouldst a husband take by my consent,
As I by thine a wife: this is a match,
And made between's by vows. Thou hast found mine;
But how, is to be question'd; for I saw her,
As I thought, dead, and have in vain said many
A prayer upon her grave. I'll not seek far—
For him, I partly know his mind —to find thee
An honourable husband. Come, Camillo
And take her by the hand, whose worth and honesty
Is richly noted and here justified
By us, a pair of kings. 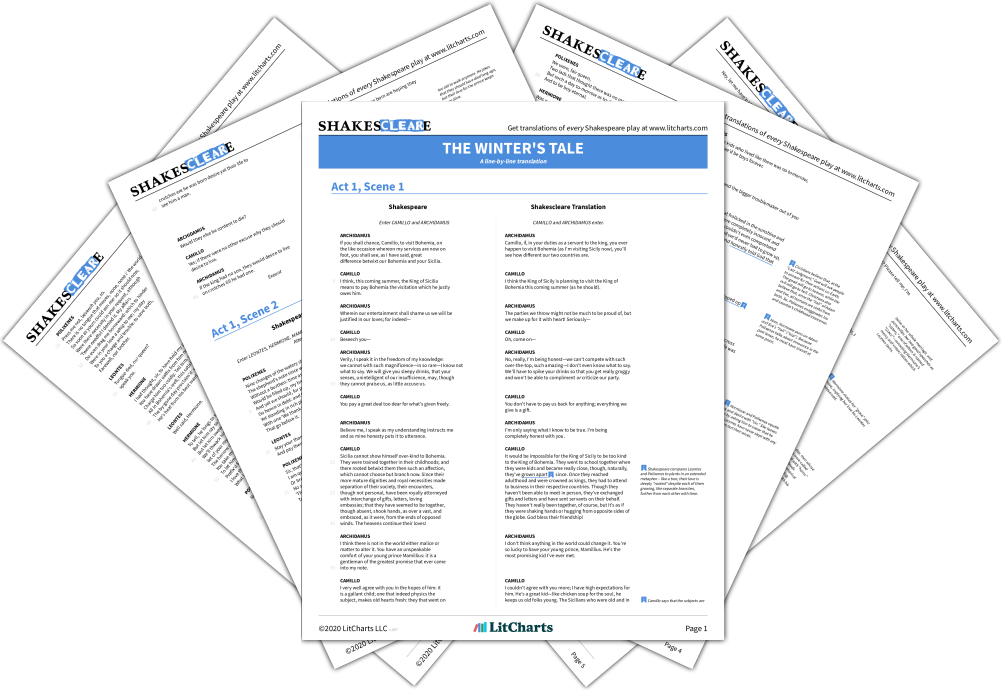