Get LitCharts A+
Keckwick is the driver who is appointed to ferry Arthur back and forth between the town of Crythin Gifford and the isolated estate of Eel Marsh House via a small, two-person pony trap. Keckwick is a man of very few words. It is eventually revealed that Keckwick was the driver in the fatal pony trap accident that claimed the lives of Jennet’s son and the boy’s nanny.

Keckwick Quotes in The Woman in Black

The The Woman in Black quotes below are all either spoken by Keckwick or refer to Keckwick. For each quote, you can also see the other characters and themes related to it (each theme is indicated by its own dot and icon, like this one:

). Note: all page numbers and citation info for the quotes below refer to the Vintage edition of The Woman in Black published in 2011.
Chapter 4 Quotes

"Well," I said, "if he's buying up half the county I suppose I may be doing business with him myself before the year is out. I am a solicitor looking after the affairs of the late Mrs. Alice Drablow of Eel Marsh House. It is quite possible that her estate will come up for sale in due course."

For a moment, my companion still said nothing, only buttered a thick slice of bread and laid his chunks of cheese along it carefully. I saw by the clock on the opposite wall that it was half past one, and I wanted to change my clothes before the arrival of Mr. Keckwick, so that I was about to make my excuses and go, when my neighbor spoke. "l doubt," he said, in a measured tone, "whether even Samuel Daily would go so far."

No car appeared. Instead, there drew up outside the Gifford Arms a rather worn and shabby pony and trap. It was not at all out of place in the market square—I had noticed a number of such vehicles that morning and, assuming that this one belonged to some farmer or stockman, I took no notice, but continued to look around me, for a motor. Then I heard my name called.

The pony was a small, shaggy-looking creature, wearing blinkers, and the driver with a large cap pulled down low over his brow, and a long, hairy brown coat, looked not unlike it, and blended with the whole equipage. 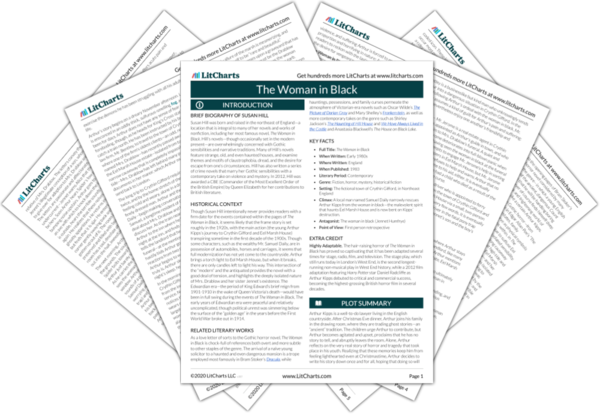 Keckwick Character Timeline in The Woman in Black

The timeline below shows where the character Keckwick appears in The Woman in Black. The colored dots and icons indicate which themes are associated with that appearance.

...Arthur to cross the causeway any time after one o’clock in the afternoon—a man named Keckwick, who has always been the “go-between” to the estate, will come and collect him, and... (full context)

Keckwick pulls up outside the Gifford Arms in a shabby pony trap. Arthur was expecting a... (full context)

...feels a blend of excitement and alarm. Arthur hops out of the cart and asks Keckwick how long before high tide—Keckwick says it comes in at about five in the evening.... (full context)

...He has had enough solitude for one day, and though there is an hour before Keckwick’s return, Arthur decides to begin walking back towards town rather than linger in the house... (full context)

...retrace his steps back toward the house and wait there until the mist clears, or Keckwick returns to fetch him. (full context)

...time he does he becomes disoriented. Before long he begins to hear the sound of Keckwick’s pony trap coming towards him and feels relieved, but soon realizes that the sound seems... (full context)

...the causeway would be to risk his own life—he may not be able to help Keckwick or the child even if he finds them, and may even be sucked into the... (full context)

...door. He stumbles through the hall and answers the door—he is shocked to see that Keckwick is standing there, and, behind him on the driveway, is the pony trap. The marshes... (full context)

Keckwick laments that the only thing to do when such a fog rolls in is to... (full context)

Arthur begins to ask Keckwick how he got unstuck form the marsh, but then the horrible realization that someone other... (full context)

...all the lights in the house and then gets into the pony trap. He and Keckwick make their way across the causeway, and Arthur falls into an uneasy half-sleep. He thinks... (full context)

...with “whatever will surely follow.” For fifty years, many denizens of the town—including Jerome and Keckwick—have suffered the curse of Eel Marsh House. (full context) 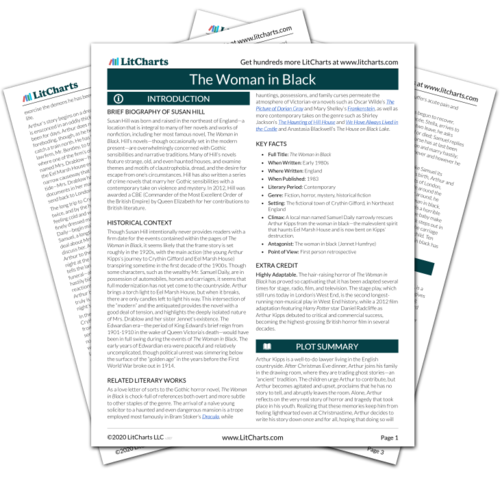 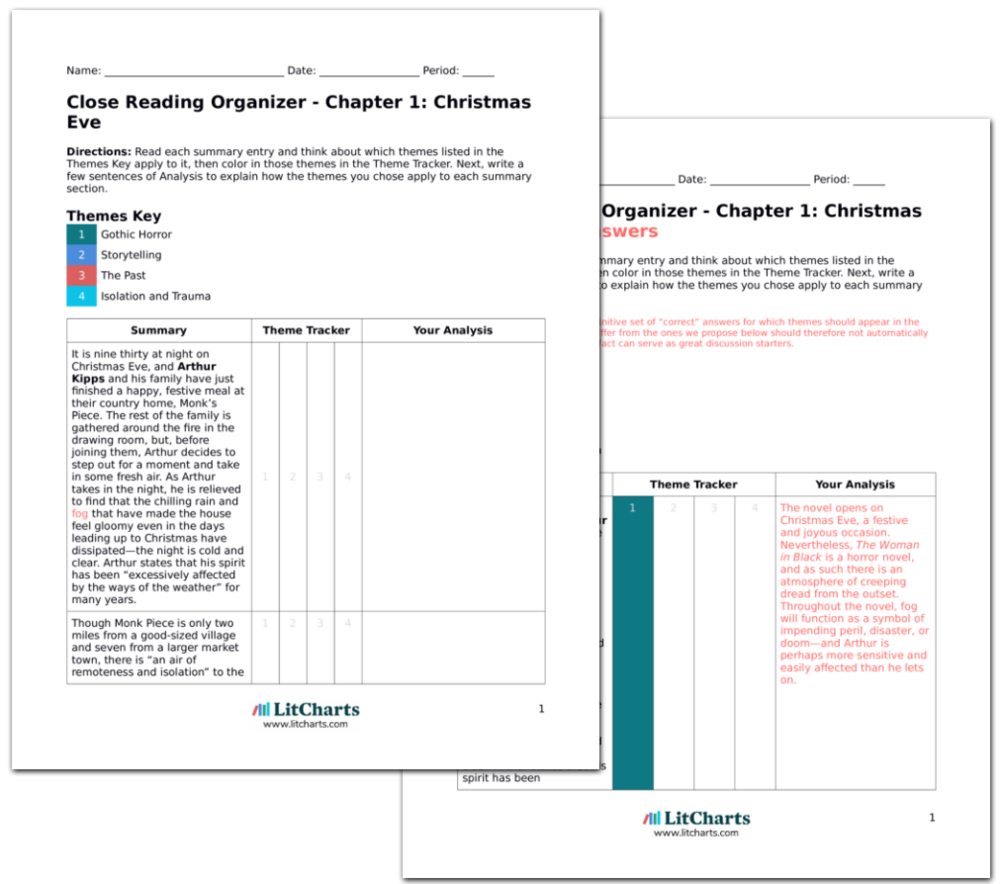