Download this LitChart! (PDF)
Teachers and parents! Struggling with distance learning? Our Teacher Edition on The Woman in White can help.

Welcome to the LitCharts study guide on Wilkie Collins's The Woman in White. Created by the original team behind SparkNotes, LitCharts are the world's best literature guides.

The Woman in White: Introduction

A concise biography of Wilkie Collins plus historical and literary context for The Woman in White.

The Woman in White: Plot Summary

A quick-reference summary: The Woman in White on a single page.

In-depth summary and analysis of every chapter of The Woman in White. Visual theme-tracking, too.

The Woman in White: Themes

Explanations, analysis, and visualizations of The Woman in White's themes.

The Woman in White: Quotes

The Woman in White's important quotes, sortable by theme, character, or chapter.

The Woman in White: Characters

Description, analysis, and timelines for The Woman in White's characters.

The Woman in White: Symbols

Explanations of The Woman in White's symbols, and tracking of where they appear.

The Woman in White: Theme Wheel

An interactive data visualization of The Woman in White's plot and themes.

Born in London in 1824, Wilkie Collins was the son of the well-known landscape painter William Collins and grandson of the famous Scottish painter, David Wilkie. Collins travelled in Italy and France as a child but returned to England in 1838 to attend boarding school. He took a job as a clerk after finishing school but was unenthusiastic about the profession and spent much of his time writing stories. Collins’ father pushed him to have an income, and Collins tried his hand at studying law but was consistently distracted by his writing. His father died in 1847, and although Collins finished his studies, he did not go on to become a lawyer. Collins had many friends in London and was involved in the artistic, literary, and theatrical scene. He published his first novel, Antonia, in 1850 and became close friends with the famous Victorian novelist Charles Dickens in 1851. Dickens took a great interest in Collins’ writing. The two collaborated on several pieces, and Collins published stories and serialized novels in Dickens’ literary journal, Household Words. In terms of his personal beliefs, Collins was very critical of marriage as an institution. He began a relationship with a shopkeeper named Caroline Graves in 1858. The pair lived together but never married, and in 1868 Collins married Martha Rudd, although he continued to split his time between her and Caroline for the rest of his life. In the 1860s Collins wrote his most famous novels, including The Woman in White and The Moonstone, but his health began to decline a decade later, and he became addicted to laudanum, which impacted his writing career. Collins died in 1889 and was buried in London; his tombstone is dedicated to “the author of The Woman in White.”
Get the entire The Woman in White LitChart as a printable PDF.
"My students can't get enough of your charts and their results have gone through the roof." -Graham S.
Download 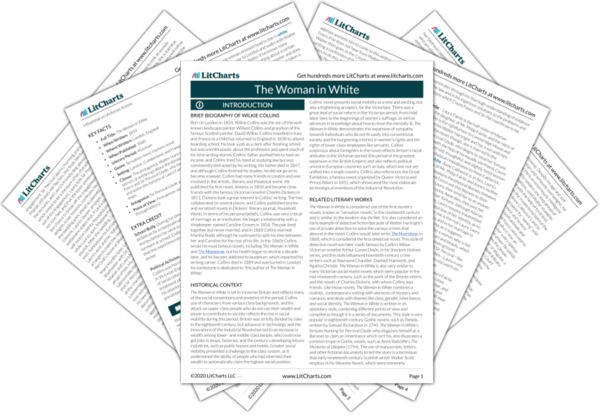 Historical Context of The Woman in White

The Woman in White is set in Victorian Britain and reflects many of the social conventions and anxieties of the period. Collins use of characters from various class backgrounds, and his attack on upper-class people who do not use their wealth and power to contribute to society reflects the rise in social mobility during this period. Britain was strictly divided by class in the eighteenth century, but advances in technology and the innovations of the Industrial Revolution led to an increase in wealth among lower- and middle-class people, who could now get jobs in shops, factories, and the century’s developing leisure industries, such as public houses and hotels. Greater social mobility presented a challenge to the class system, as it undermined the ability of people who had inherited their wealth to automatically claim the highest social position. Collins’ novel presents social mobility as a new and exciting, but also a frightening prospect, for the Victorians. There was a great deal of social reform in the Victorian period, from child labor laws to the beginnings of women’s suffrage, as well as advances in knowledge about how to treat the mentally ill. The Woman in White demonstrates this expansion of sympathy towards individuals who do not fit easily into conventional society and the burgeoning interest in women’s rights and the rights of lower-class employees like servants. Collins’ suspicious about foreigners in the novel reflects Britain’s racial attitudes in the Victorian period (the period of the greatest expansion in the British Empire) and also reflects political unrest in European countries such as Italy, which was not yet unified into a single country. Collins also references the Great Exhibition, a famous event organized by Queen Victoria and Prince Albert in 1851, which showcased the most elaborate technological inventions of the Industrial Revolution.

Other Books Related to The Woman in White

The Woman in White is considered one of the first mystery novels, known as “sensation novels,” in the nineteenth century and is similar to the modern-day thriller. It is also considered an early example of detective fiction because of Walter Hartright’s use of private detection to solve the various crimes that abound in the novel. Collins would later write The Moonstone, in 1868, which is considered the first detective novel. This style of detective novel was later made famous by Collin’s fellow Victorian novelist Arthur Conan Doyle, in his Sherlock Holmes series, and this style influenced twentieth-century crime writers such as Raymond Chandler, Dashiell Hammett, and Agatha Christie. The Woman in White is also very similar to many Victorian social realist novels which were popular in the mid-nineteenth century, such as the work of the Bronte sisters, and the novels of Charles Dickens, with whom Collins was friends. Like those novels, The Woman in White combines a realistic, contemporary setting with elements of mystery and romance, and deals with themes like class, gender, inheritance, and social identity. The Woman in White is written in an epistolary style, combining different points of view and compiled as though it is a series of documents. This style is very popular in eighteenth-century Gothic novels, such as Pamela, written by Samuel Richardson in 1740. The Woman in White’s fortune-hunting Sir Percival Glyde, who disguises himself as a Baronet to claim an inheritance which isn’t his, also illustrates a common trope in Gothic novels, such as Anne Radcliffe’s The Mysteries of Udolpho (1794). The use of manuscripts, letters, and other fictional documents to tell the story is a technique that early nineteenth-century Scottish writer Walter Scott employs in his Waverley Novels, which were extremely influential on Victorian fiction.
Key Facts about The Woman in White

Extra Credit for The Woman in White

School Bully. During his time at boarding school, Collins was picked on by a classmate who used to make Collins tell him stories before he went to sleep. Although this was a form of torment at school, Collins enjoyed making up stories and felt that this experience encouraged his subsequent career as a writer.

Political Activism. Like his friend and mentor Charles Dickens, Collins was horrified by the social injustices which he witnessed in Victorian England and used his novels to argue the necessity of social reforms, such as the rights of women and the treatment of mentally ill. His interest in these social issues, and his attacks on institutions like marriage, which he felt prevented reform, are particularly clear in The Woman in White. 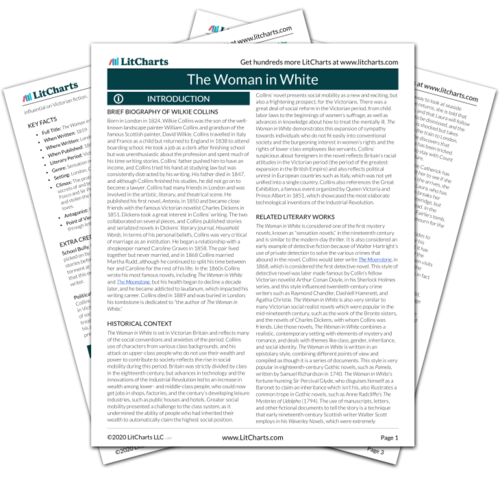 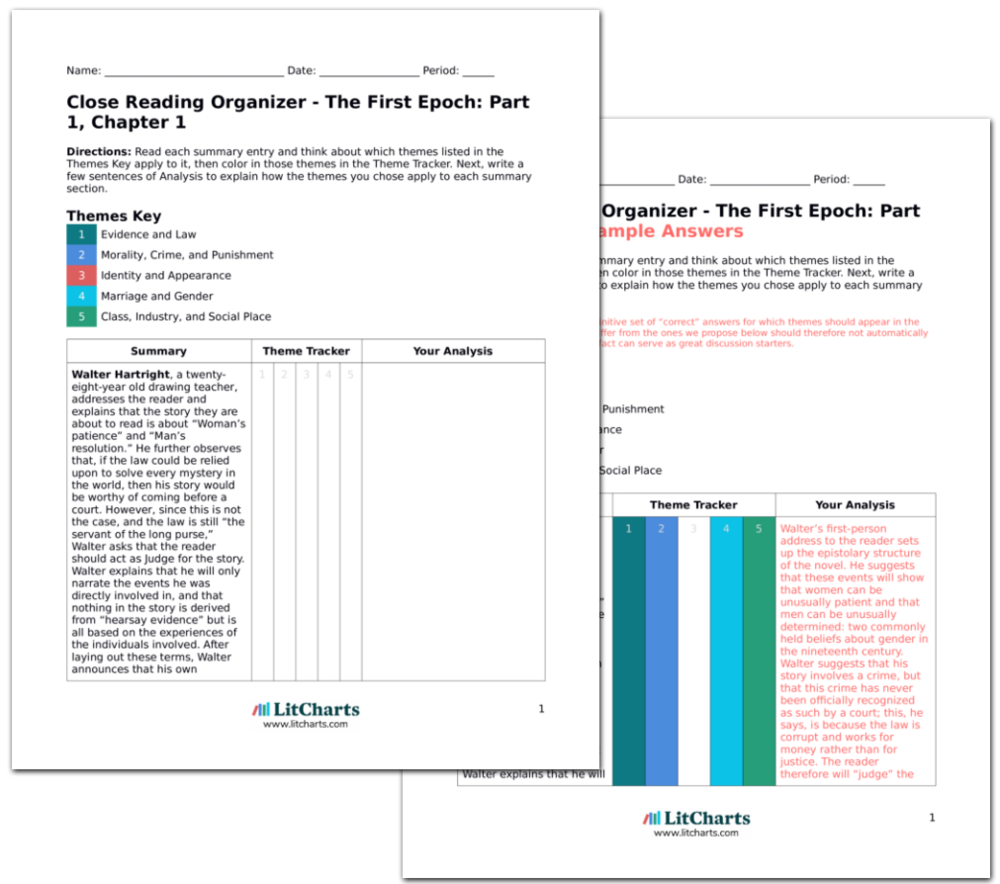