Download this LitChart! (PDF)
Teachers and parents! Struggling with distance learning? Our Teacher Edition on The Wretched of the Earth can help.

Welcome to the LitCharts study guide on Frantz Fanon's The Wretched of the Earth. Created by the original team behind SparkNotes, LitCharts are the world's best literature guides.

The Wretched of the Earth: Introduction

A concise biography of Frantz Fanon plus historical and literary context for The Wretched of the Earth.

The Wretched of the Earth: Plot Summary

A quick-reference summary: The Wretched of the Earth on a single page.

The Wretched of the Earth: Detailed Summary & Analysis

In-depth summary and analysis of every chapter of The Wretched of the Earth. Visual theme-tracking, too.

The Wretched of the Earth: Themes

Explanations, analysis, and visualizations of The Wretched of the Earth's themes.

The Wretched of the Earth: Quotes

The Wretched of the Earth's important quotes, sortable by theme, character, or chapter.

The Wretched of the Earth: Characters

Description, analysis, and timelines for The Wretched of the Earth's characters.

Description, analysis, and timelines for The Wretched of the Earth's terms.

The Wretched of the Earth: Symbols

Explanations of The Wretched of the Earth's symbols, and tracking of where they appear.

The Wretched of the Earth: Theme Wheel

An interactive data visualization of The Wretched of the Earth's plot and themes.

Fanon was born in Fort-de-France on the Caribbean island of Martinique to Eléanore Médélice, a shopkeeper of Afro-Martinican and European descent, and Felix Casimir Fanon, a customs agent and descendent of African slaves and indentured Indians. Fanon was one of eight children, and he lived a comfortable middle-class life and attended Lycée Schoelcher, a respected private high school in Martinique. Fanon enlisted with the Free French forces when he was 18 and joined an Allied convoy during World War II. He was wounded during combat in Colmar, France, in 1944, and in 1955, he was repatriated back to Martinique. Fanon attended university and earned a bachelor’s degree, and then relocated to France for medical school, during which time he began writing and penned three original plays. Fanon became a psychiatrist in 1951, and during his medical residency in 1952, he wrote and published Black Skin, White Masks, which, like The Wretched of the Earth, explores the psychological effects of colonial racism on the black individual. In 1953, Fanon relocated to Algeria, where he also worked as a psychiatrist. He was deeply sympathetic to the Algerians’ fight for liberation from French colonialism during the Algerian War of Independence, and in 1954, he joined the Front de Libération Nationale, fighting on behalf of the Nigerians. He wrote and published The Wretched of the Earth in 1961, which was heavily censored by the French government. Around this time, Fanon was diagnosed with leukemia. He sought treatment in the Soviet Union early in his illness, but he later traveled to the United States for continued medical management. Fanon died on December 6, 1961, at the National Institutes of Health facility in Bethesda, Maryland, at just 36 years old. He left behind a wife, Josie, and a son, Oliver, as well as a daughter, Mireille, from a previous relationship. During his short life, Fanon was an important voice in the fields of postcolonialism and Marxism, and his work has been invaluable to the development of critical theory. He advocated tirelessly for the decolonization of the Third World, and was particularly interested in the psychological impact of colonialist oppression on the colonized individual.
Get the entire The Wretched of the Earth LitChart as a printable PDF.
"My students can't get enough of your charts and their results have gone through the roof." -Graham S.
Download 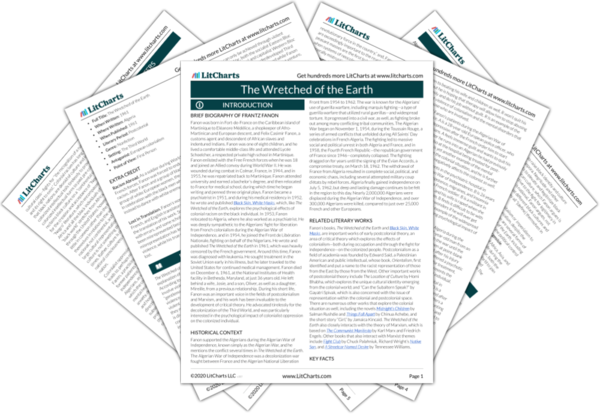 Historical Context of The Wretched of the Earth

Fanon supported the Algerians during the Algerian War of Independence, known simply as the Algerian War, and he mentions the conflict several times in The Wretched of the Earth. The Algerian War of Independence was a decolonization war fought between France and the Algerian National Liberation Front from 1954 to 1962. The war is known for the Algerians’ use of guerilla warfare, including marquis fighting—a type of guerilla warfare that utilized rural guerillas—and widespread torture. It progressed into a civil war, as well, as fighting broke out among many conflicting tribal communities. The Algerian War began on November 1, 1954, during the Toussain Rouge, a series of armed conflicts that unfolded during All Saints’ Day celebrations in French Algeria. The fighting led to massive social and political unrest in both Algeria and France, and in 1958, the Fourth French Republic—the republican government of France since 1946—completely collapsed. The fighting dragged on for years until the signing of the Évian Accords, a compromise treaty, on March 18, 1962. The withdrawal of France from Algeria resulted in complete social, political, and economic chaos, including several attempted military coup d’états by rebel forces. Algeria finally gained independence on July 5, 1962, but deep and lasting damage continues to be felt in the region to this day. Nearly 2,000,000 Algerians were displaced during the Algerian War of Independence, and over 300,000 Algerians were killed, compared to just over 25,000 French and other Europeans.

Other Books Related to The Wretched of the Earth

Fanon’s books, The Wretched of the Earth and Black Skin, White Masks, are important works of early postcolonial theory, an area of critical theory which explores the effects of colonialism—both during occupation and through the fight for independence—on the colonized people. Postcolonialism as a field of academia was founded by Edward Said, a Palestinian American and public intellectual, whose book, Orientalism, first identified and put a name to the racist representation of those from the East by those from the West. Other important works of postcolonial theory include The Location of Culture by Homi Bhabha, which explores the unique cultural identity emerging from the colonial world; and “Can the Subaltern Speak?” by Gayatri Spivak, which is also concerned with the issue of representation within the colonial and postcolonial space. There are numerous other works that explore the colonial situation as well, including the novels Midnight’s Children by Salman Rushdie and Things Fall Apart by Chinua Achebe, and the short story “Girl,” by Jamaica Kincaid. The Wretched of the Earth also closely interacts with the theory of Marxism, which is based on The Communist Manifesto by Karl Marx and Friedrich Engels. Other books that also interact with Marxist themes include Fight Club by Chuck Palahniuk, Richard Wright’s Native Son, and A Streetcar Named Desire by Tennessee Williams.
Key Facts about The Wretched of the Earth

Extra Credit for The Wretched of the Earth

Racism Abroad. As a soldier during World War II for the Free French forces, Fanon was forced to endure cruel and endless racism. After Fanon and a group of black soldiers liberated a group of white European women, the women refused to dance in celebration with the black men who saved them and chose instead to dance with white enemy prisoners.

Lost in Translation. Fanon’s work was originally written in French, and English translators have long since disagreed on the translation of his work. Some early translations are riddled with errors, and some scholars believe that Fanon’s work has been misrepresented because of these mistakes. This misrepresentation has led to Fanon’s image as a proponent of violence, while his true message of decolonization and unity is lost. 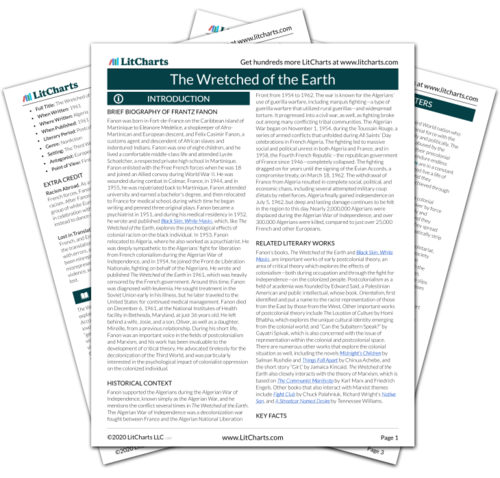 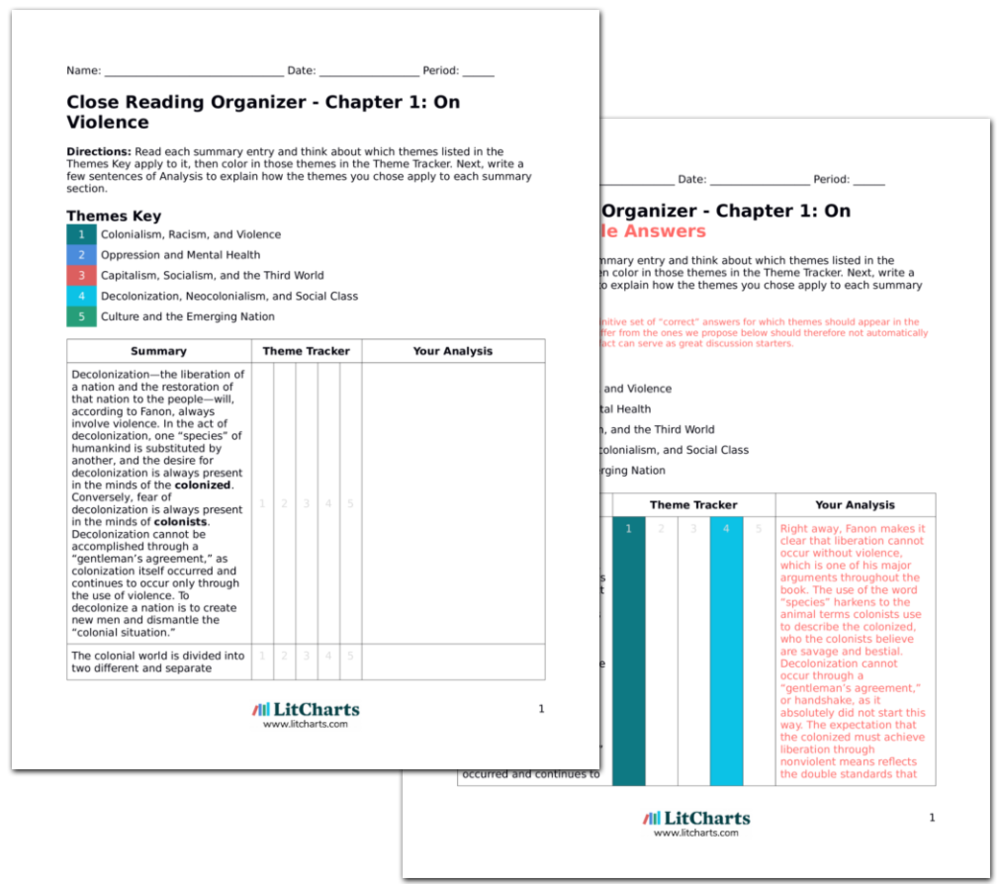