Download this LitChart! (PDF)
Teachers and parents! Struggling with distance learning? Our Teacher Edition on The Zoo Story can help.

Welcome to the LitCharts study guide on Edward Albee's The Zoo Story. Created by the original team behind SparkNotes, LitCharts are the world's best literature guides.

A concise biography of Edward Albee plus historical and literary context for The Zoo Story.

A quick-reference summary: The Zoo Story on a single page.

In-depth summary and analysis of every of The Zoo Story. Visual theme-tracking, too.

Explanations, analysis, and visualizations of The Zoo Story's themes.

The Zoo Story's important quotes, sortable by theme, character, or .

Description, analysis, and timelines for The Zoo Story's characters.

Explanations of The Zoo Story's symbols, and tracking of where they appear.

An interactive data visualization of The Zoo Story's plot and themes.

Edward Albee, the author of classic family dramas like Who’s Afraid of Virginia Woolf? and A Delicate Balance, was no stranger to domestic unhappiness. Adopted soon after his birth by a wealthy young couple, Albee’s parents greeted his artistic aspirations with disinterest and disgust. After cycling through a series of upscale boarding schools, Albee, searching for a community that would welcome him as both an artist and an openly gay man, moved to New York City’s Greenwich Village. It was in the Village that he penned The Zoo Story—the play that, after its 1960 premiere, put Albee on the map as a radically new theatrical voice. Albee followed The Zoo Story with a series of Tony- and Pulitzer-winning successes; though his career waxed and waned, due in part to his struggles with alcoholism, he continued to write critically acclaimed work (like The Goat, or Who is Sylvia?) well into the twenty-first century. Famous for his difficulty as a collaborator, his desire to challenge audiences, and his unusually expansive body of work, Albee was considered one of America’s greatest playwrights by his death in 2016.
Get the entire The Zoo Story LitChart as a printable PDF.
"My students can't get enough of your charts and their results have gone through the roof." -Graham S.
Download 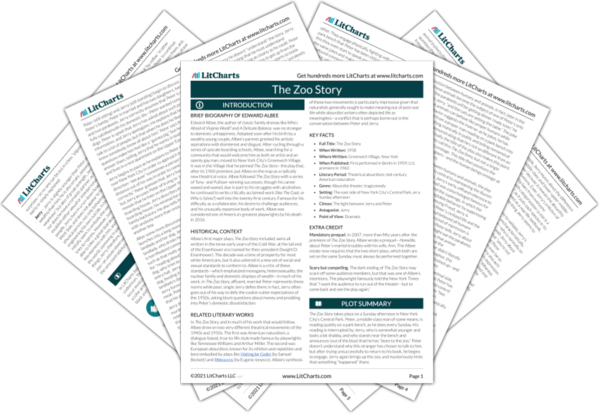 Historical Context of The Zoo Story

Albee’s first major plays, The Zoo Story included, were all written in the tense early years of the Cold War, at the tail end of the Eisenhower era (named for then-president Dwight D. Eisenhower). The decade was a time of prosperity for most white Americans, but it also ushered in a new set of social and sexual standards to conform to. Albee is a critic of these standards—which emphasized monogamy, heterosexuality, the nuclear family and domestic displays of wealth—in much of his work. In The Zoo Story, affluent, married Peter represents these norms while poor, single Jerry defies them; in fact, Jerry often goes out of his way to defy the cookie-cutter expectations of the 1950s, asking blunt questions about money and prodding into Peter’s domestic dissatisfaction.

Other Books Related to The Zoo Story

In The Zoo Story, and in much of his work that would follow, Albee drew on two very different theatrical movements of the 1940s and 1950s. The first was American naturalism, a dialogue-based, true-to-life style made famous by playwrights like Tennessee Williams and Arthur Miller. The second was European absurdism, known for its nihilism and repetition and best embodied by plays like Waiting for Godot (by Samuel Beckett) and Rhinoceros (by Eugene Ionesco). Albee’s synthesis of these two movements is particularly impressive given that naturalists generally sought to make meaning out of post-war life while absurdist writers often depicted life as meaningless—a conflict that is perhaps borne out in the conversation between Peter and Jerry.
Key Facts about The Zoo Story

Extra Credit for The Zoo Story

Mandatory prequel. In 2007, more than fifty years after the premiere of The Zoo Story, Albee wrote a prequel—Homelife, about Peter’s marital troubles with his wife, Ann. The Albee estate now requires that the two short plays, which both are set on the same Sunday, must always be performed together.

Scary but compelling. The dark ending of The Zoo Story may scare off some audience members, but that was one of Albee’s intentions. The playwright famously told the New York Times that “I want the audience to run out of the theater—but to come back and see the play again.” 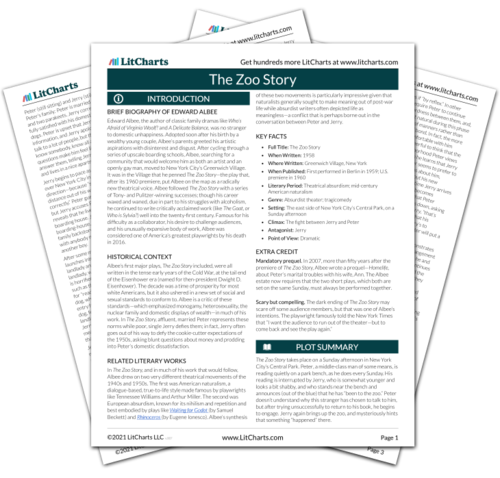 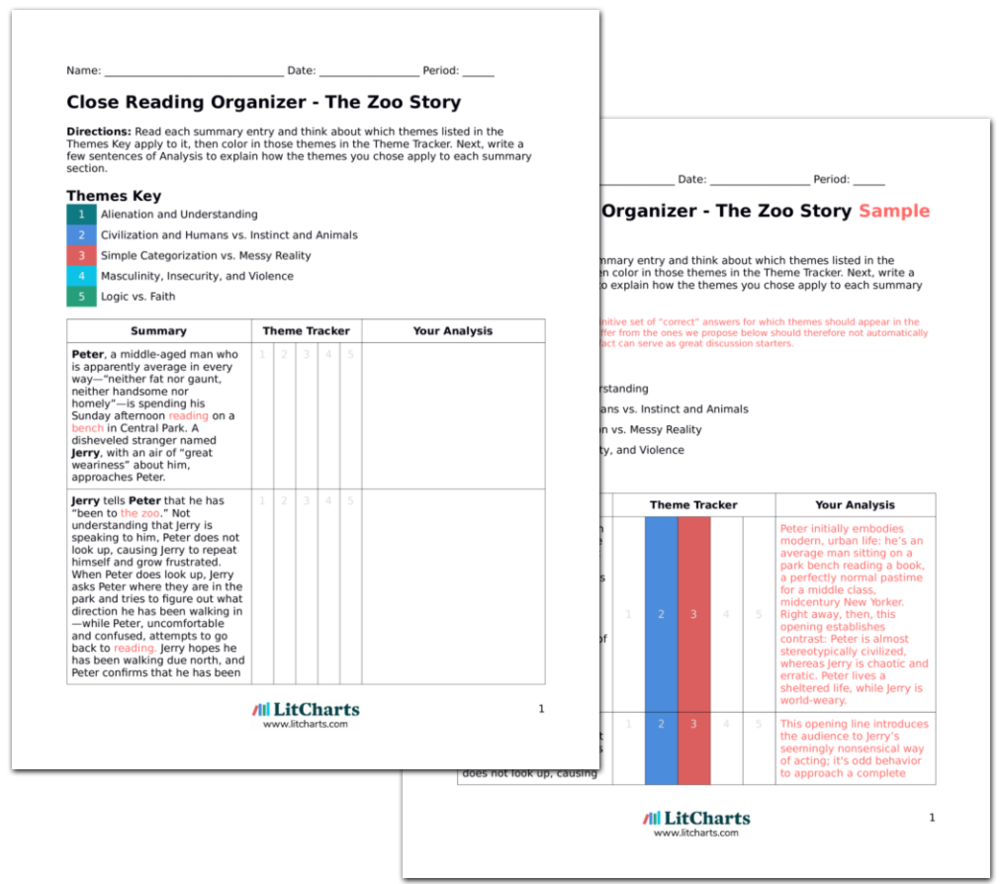