Knives symbolize guilt, shame, and personal accountability. A character’s relation to knives shows where they are in their journey to overcome their demons. David Ware, the Osborne Slayer, targets ambitious peers who have the drive and privilege to escape their boring, rural hometown of Osborne, Nebraska. He uses his knife to express and externalize his inner resentment toward more fortunate, fulfilled, and driven teens like Matt Butler, the football star, or Katie Kurtzman, the student council president, whose skills have given them a ticket out of Osborne. David lashes out at others and punishes them for their successes instead of reflecting inwardly on the personal flaws contributing to his feeling stuck and miserable. His knife symbolizes his inability to do the inner work required to improve one’s situation and move beyond one’s demons.

Makani’s associations with knives mirror her journey to move beyond the demons of her past and reclaim her life. Knives remind Makani of a cruel hazing ritual that took place back in Hawaii. In a drunken rage, Makani attacked her best friend Jasmine, cutting off Jasmine’s hair with a knife and leaving her to drown in the ocean. The police ultimately charged Makani with assault, and all of Makani’s friends turned on her. For much of the novel, Makani’s past haunts her present. She’s terrified that her new friends will discover what she did to Jasmine and abandon her as her old friends did. She also thinks her past makes her incapable of change or redemption. When Chris, Ollie’s police officer brother, innocently questions Makani about her experience with knives during the police investigation into the Osborne slayings, she freaks out—she immediately assumes that Chris (and Ollie) have found out about her past and will judge her for it. Once Makani learns to forgive herself for her past mistakes, she reclaims her life and moves beyond her shame and guilt. Correspondingly, her associations with knives also change. At the end of the novel, when Makani uses a knife to kill David, she does so to avenge her murdered peers and prevent David from committing future acts of violence. She uses a knife for good instead of evil, showing the reader—and Makani herself—that she can move beyond her troubled past and choose to be the good person she longs to be.

Knives Quotes in There’s Someone Inside Your House

The There’s Someone Inside Your House quotes below all refer to the symbol of Knives. For each quote, you can also see the other characters and themes related to it (each theme is indicated by its own dot and icon, like this one:

It had been so long since Makani had felt any amount of genuine, unadulterated happiness that she’d forgotten that sometimes it could hurt as much as sadness. His declaration pierced through the muscle of her heart like a skillfully thrown knife. It was the kind of pain that made her feel alive. 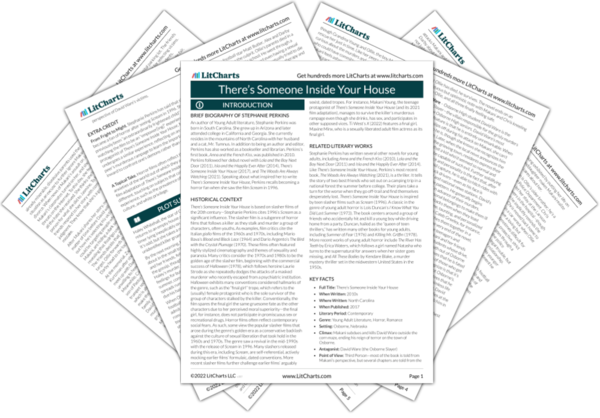 Knives Symbol Timeline in There’s Someone Inside Your House

The timeline below shows where the symbol Knives appears in There’s Someone Inside Your House. The colored dots and icons indicate which themes are associated with that appearance.

...she places her dirty dishes in the dishwasher, the only thing inside is a butter knife. She notices the sink is empty, too, and she suddenly feels nervous. As she turns... (full context)

...figure. They raise their head slowly. Just as Matt recognizes the person, they stab a knife through his stomach. Matt falls to the floor. The figure stabs Matt through the skull.... (full context)

...has any hunting experience, has ever gutted a fish, or had much experience using a knife. Makani freezes; why is he asking her about a knife? Chris tells her the person... (full context)

Makani screams. The killer drops his large, double-edged knife to the floor. Makani can’t make out his face but sees that he’s white and... (full context)

The surgeon tells Makani that Grandma Young will be okay. Luckily, David’s knife missed her aorta. However, she’ll have to stay in the hospital for at least three... (full context)

...excruciating. Makani spots a bottle of water in the sand nearby, lying next to a knife and some empty cans. Makani runs to the bottle, desperate to stop the searing pain.... (full context)

...Ware. He’s holding the grooming bucket, and he’s covered in dried blood. He removes his knife from its sheath and steps toward Rosemarie. Rosemarie grasps her pitchfork and attacks David. (full context)

...spotlight on David and Rosemarie. Makani jumps out of the car as David aims his knife at Rosemarie’s throat. Alex screams, distracting David, while Makani jumps on him. They struggle, but... (full context)

...and stands between David and Ollie. David tackles her to the ground and raises the knife above his head. Just as he’s about to plunge the knife into Makani’s heart, Makani... (full context)

...I get to leave.” Makani still doesn’t understand. David stands before Makani and raises his knife about his head. (full context)

Makani ducks, and David’s knife hits a pumpkin behind her. She runs, and David chases her. Makani emerges from the... (full context) 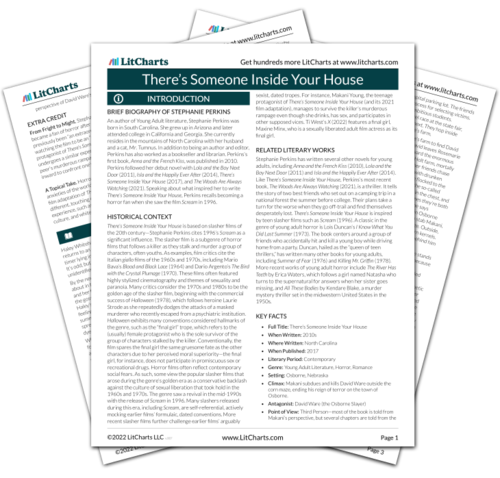 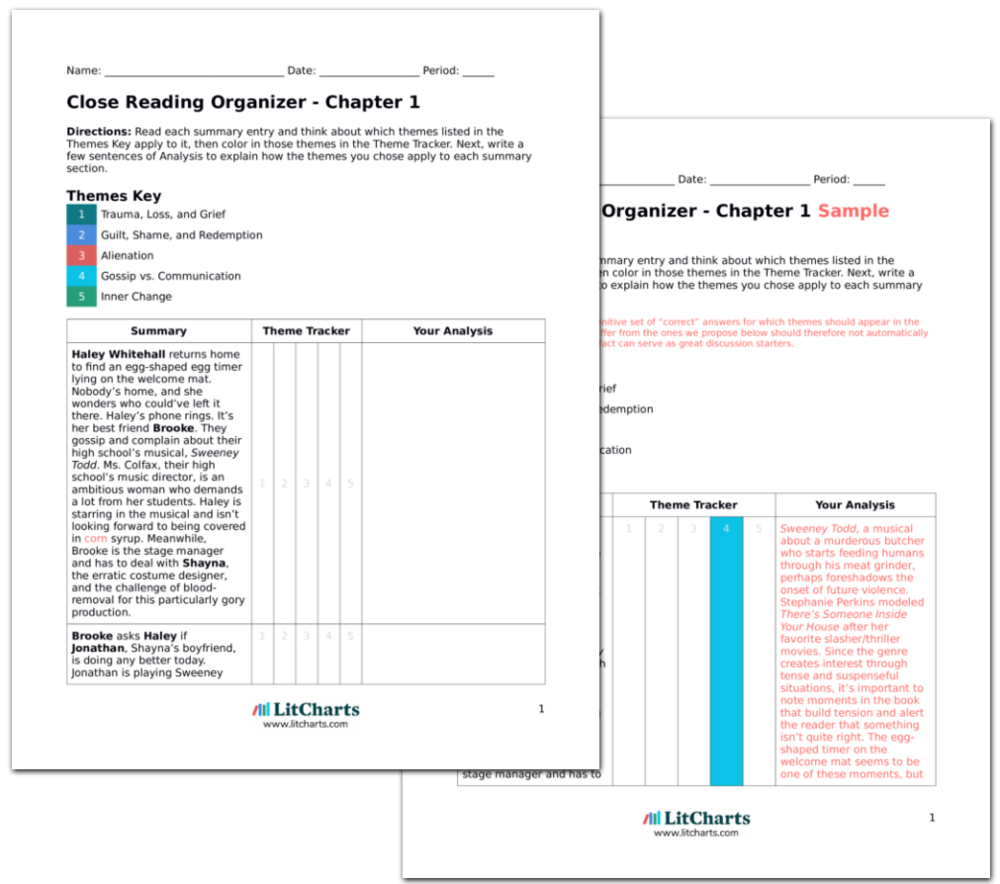