Download this LitChart! (PDF)
Teachers and parents! Struggling with distance learning? Our Teacher Edition on This Is How It Always Is can help.

Welcome to the LitCharts study guide on Laurie Frankel's This Is How It Always Is. Created by the original team behind SparkNotes, LitCharts are the world's best literature guides.

This Is How It Always Is: Introduction

A concise biography of Laurie Frankel plus historical and literary context for This Is How It Always Is.

This Is How It Always Is: Plot Summary

A quick-reference summary: This Is How It Always Is on a single page.

This Is How It Always Is: Detailed Summary & Analysis

In-depth summary and analysis of every chapter of This Is How It Always Is. Visual theme-tracking, too.

This Is How It Always Is: Themes

Explanations, analysis, and visualizations of This Is How It Always Is's themes.

This Is How It Always Is: Quotes

This Is How It Always Is's important quotes, sortable by theme, character, or chapter.

This Is How It Always Is: Characters

Description, analysis, and timelines for This Is How It Always Is's characters.

This Is How It Always Is: Symbols

Explanations of This Is How It Always Is's symbols, and tracking of where they appear.

This Is How It Always Is: Theme Wheel

An interactive data visualization of This Is How It Always Is's plot and themes.

Prior to 2011, writer Laurie Frankel worked as a college professor teaching writing, literature, and gender studies; however, she transitioned to writing full-time after the publication of her first novel, The Atlas of Love, which was a finalist for the Pacific Northwest Book Award. Frankel’s second novel, Goodbye for Now, was published in 2012. Goodbye for Now was the winner of the 2013 Endeavor Award, an annual award for outstanding science fiction writing by a Pacific Northwest writer, and was also a New York Times Editor’s Choice. Frankel published her third novel, This is How it Always is, in 2017 to popular and critical acclaim. The book won the 2018 Washington State Book Award and has been translated into over 20 languages. This is How it Always is was a New York Times bestseller and was named a Best Book of the Year by People magazine, the Chicago Public Library, and Amazon. Frankel is also the author of several essays, including “Raising a Transgender Child in the Age of Trump” and “We Adopted by Choice not Necessity,” and she has published work in the Guardian, Lit Hub, and People Magazine. Frankel is at work on her next novel, and she also teaches for several nonprofit organizations. She lives in Seattle with her husband and daughter.
Get the entire This Is How It Always Is LitChart as a printable PDF.
"My students can't get enough of your charts and their results have gone through the roof." -Graham S.
Download 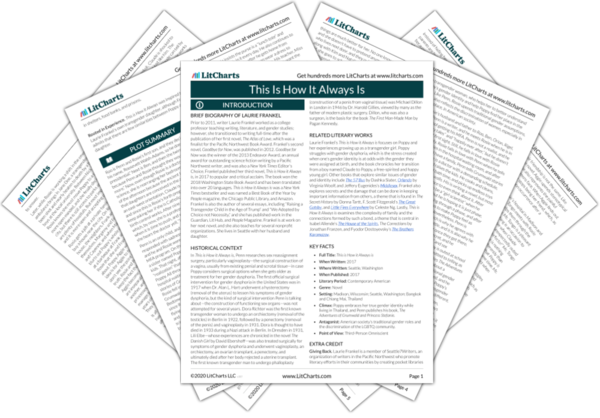 Historical Context of This Is How It Always Is

In This is How it Always is, Penn researches sex reassignment surgery, particularly vaginoplasty—the surgical construction of a vagina, usually from existing penial and scrotal tissue—in case Poppy considers surgical options when she gets older as treatment for her gender dysphoria. The first official surgical intervention for gender dysphoria in the United States was in 1917 when Dr. Alan L. Hart underwent a hysterectomy (removal of the uterus) to lessen his symptoms of gender dysphoria, but the kind of surgical intervention Penn is talking about—the construction of functioning sex organs—was not attempted for several years. Dora Richter was the first known transgender woman to undergo an orchiectomy (removal of the testicles) in Berlin in 1922, followed by a penectomy (removal of the penis) and vaginoplasty in 1931. Dora is thought to have died in 1933 during a Nazi attack in Berlin. In Dresden in 1931, Lili Elbe—whose experiences are chronicled in the novel The Danish Girl by David Ebershoff—was also treated surgically for symptoms of gender dysphoria and underwent vaginoplasty, an orchiectomy, an ovarian transplant, a penectomy, and ultimately died after her body rejected a uterine transplant. The first known transgender man to undergo phalloplasty (construction of a penis from vaginal tissue) was Michael Dillon in London in 1946 by Dr. Harold Gillies, viewed by many as the father of modern plastic surgery. Dillon, who was also a surgeon, is the basis for the book The First Man-Made Man by Pagan Kennedy.

Other Books Related to This Is How It Always Is

Laurie Frankel’s This is How it Always is focuses on Poppy and her experiences growing up as a transgender girl. Poppy struggles with gender dysphoria, which is the stress created when one’s gender identity is at odds with the gender they were assigned at birth, and the book chronicles her transition from a boy named Claude to Poppy, a free-spirited and happy young girl. Other books that explore similar issues of gender and identity include The 57 Bus by Dashka Slater, Orlando by Virginia Woolf, and Jeffery Eugenides’s Middlesex. Frankel also explores secrets and the damage that can be done in keeping important information from others, a theme that is found in The Secret History by Donna Tartt, F. Scott Fitzgerald’s The Great Gatsby, and Little Fires Everywhere by Celeste Ng. Lastly, This is How it Always is examines the complexity of family and the connections formed by such a bond, a theme that is central in Isabel Allende’s The House of the Spirits, The Corrections by Jonathan Franzen, and Fyodor Dostoyevsky’s The Brothers Karamazov.
Key Facts about This Is How It Always Is

Extra Credit for This Is How It Always Is

Giving Back. Laurie Frankel is a member of Seattle7Writers, an organization of writers in the Pacific Northwest who promote literacy efforts in their communities by creating pocket libraries in shelters, food banks, and prisons.

Rooted in Experience. This is How it Always was inspired by Laurie Frankel’s own transgender daughter, although Frankel admits that there are few similarities between Poppy and her daughter. 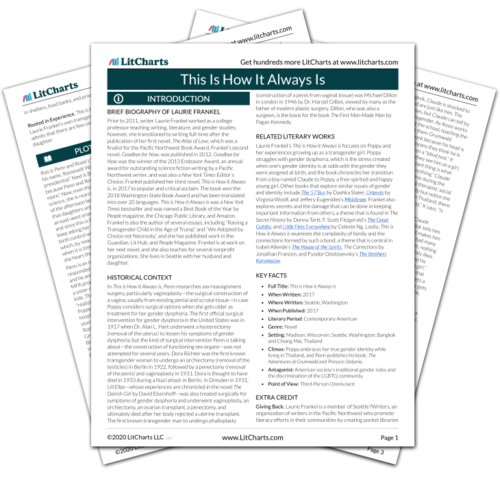 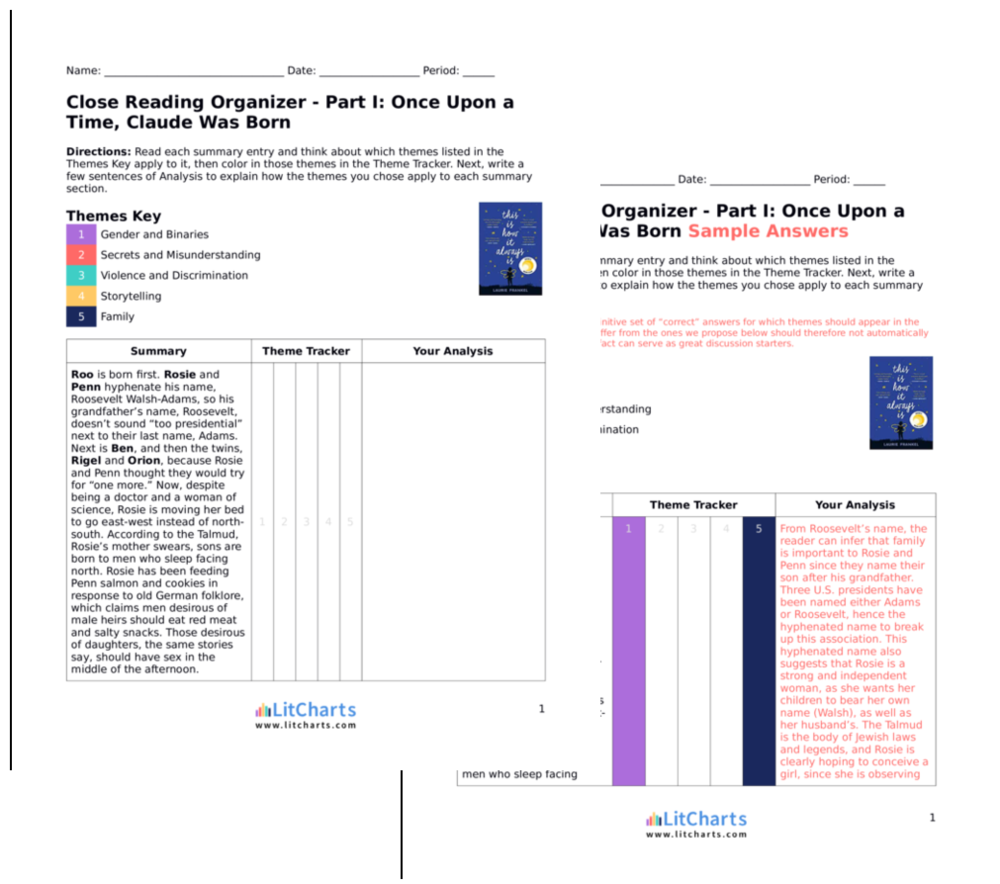