Welcome to the LitCharts study guide on Ben Mikaelsen's Touching Spirit Bear. Created by the original team behind SparkNotes, LitCharts are the world's best literature guides.

A concise biography of Ben Mikaelsen plus historical and literary context for Touching Spirit Bear.

A quick-reference summary: Touching Spirit Bear on a single page.

In-depth summary and analysis of every chapter of Touching Spirit Bear. Visual theme-tracking, too.

Explanations of Touching Spirit Bear's symbols, and tracking of where they appear.

Mikaelsen was born in Bolivia to Christian missionary parents. As a child in Bolivia, Mikaelsen grew up speaking Spanish as his first language and experienced prejudice and discrimination for being one of the only white people in his village. He didn’t start school until age nine, when he was old enough to attend the boarding school where his siblings went. Having had no education until his first day of school, Mikaelsen was punished, often physically, by his teachers for poor performance. His parents moved the family to Minnesota in time for Mikaelsen to start seventh grade. In the United States, Mikaelsen was once again bullied. To cope, he wrote stories, worked to earn money so that he could take flying lessons, and taught himself to cliff dive. It wasn’t until college that a professor, intrigued by a writing assignment Mikaelsen turned in, connected Mikaelsen with a tutor so that he could learn basic spelling, grammar, and conventions. After moving to Montana and becoming involved with his local Fish and Game office, Mikaelsen adopted a declawed black bear cub that was going to be euthanized otherwise. Buffy the bear lived with Mikaelsen until his death in 2012; Buffy inspired Touching Spirit Bear. Though Touching Spirit Bear is Mikaelsen’s most famous work, he’s written a number of other novels for young readers. Mikaelsen also runs an anti-bullying project and speaks about bullying to schools. He lives with his wife in Anacortes, Washington.
Get the entire Touching Spirit Bear LitChart as a printable PDF.
"My students can't get enough of your charts and their results have gone through the roof." -Graham S.
Download 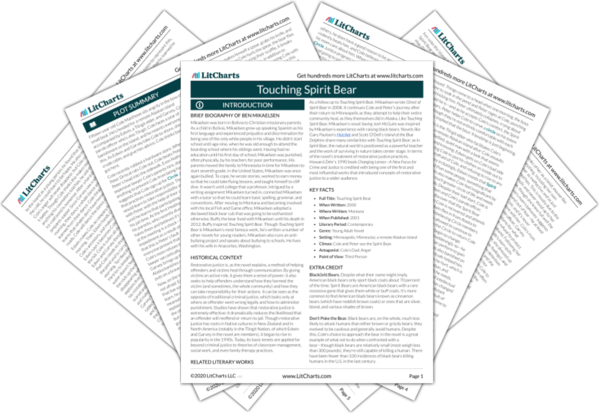 Restorative justice is, as the novel explains, a method of helping offenders and victims heal through communication. By giving victims an active role, it gives them a sense of power; it also seeks to help offenders understand how they harmed the victim (and sometimes, the whole community) and how they can take responsibility for their actions. It can be seen as the opposite of traditional criminal justice, which looks only at where an offender went wrong legally and how to administer punishment. Studies have shown that restorative justice is extremely effective: it dramatically reduces the likelihood that an offender will reoffend or return to jail. Though restorative justice has roots in Native cultures in New Zealand and in North America (notably in the Tlingit Nation, of which Edwin and Garvey in the novel are members), it began to rise in popularity in the 1990s. Today, its basic tenets are applied far beyond criminal justice to theories of classroom management, social work, and even family therapy practices.

As a follow up to Touching Spirit Bear, Mikaelsen wrote Ghost of Spirit Bear in 2008. It continues Cole and Peter’s journey after their return to Minneapolis as they attempt to help their entire community heal, as they themselves did in Alaska. Like Touching Spirit Bear, Mikaelsen’s novel Saving Josh McGuire was inspired by Mikaelsen’s experience with raising black bears. Novels like Gary Paulsen’s Hatchet and Scott O’Dell’s Island of the Blue Dolphins share many similarities with Touching Spirit Bear; as in Spirit Bear, the natural world is positioned as a powerful teacher and the work of surviving in nature takes center stage. In terms of the novel’s treatment of restorative justice practices, Howard Zehr’s 1990 book Changing Lenses—A New Focus for Crime and Justice is credited with being one of the first and most influential works that introduced concepts of restorative justice to a wider audience.
Key Facts about Touching Spirit Bear

Don’t Poke the Bear. Black bears are, on the whole, much less likely to attack humans than either brown or grizzly bears; they evolved to be cautious and generally avoid humans. Despite this, Cole’s choice to approach the bear in the novel is a great example of what not to do when confronted with a bear—though black bears are relatively small (most weigh less than 300 pounds), they’re still capable of killing a human. There have been fewer than 100 incidences of black bears killing humans in the U.S. in the last century. 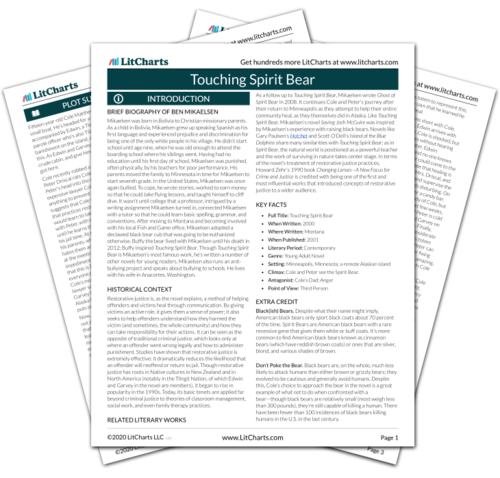 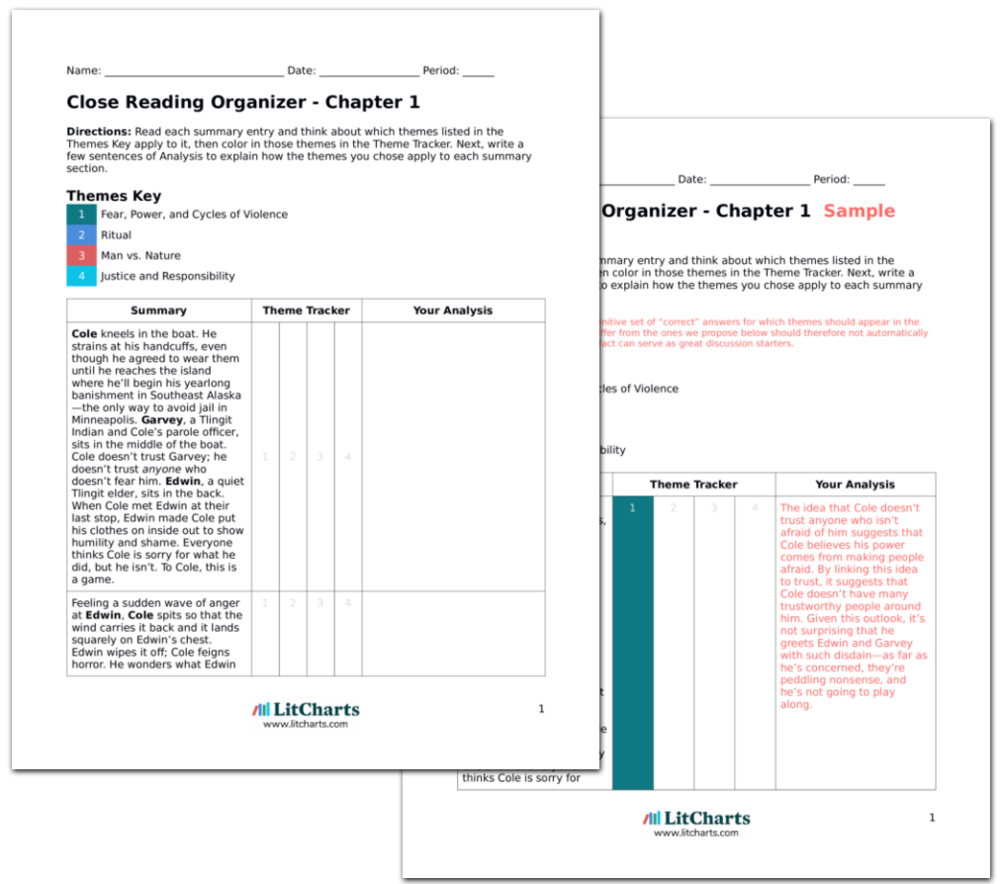