Get LitCharts A+
Glendle is the white community advisor to the Aboriginal settlement of Pipalyatjara. Davidson and Eddie meet Glendle during their visit to the settlement and he welcomes them warmly, providing a much-needed source of conversation and commiseration for Davidson. Although he loves his job as community advisor, he is constantly frustrated by his enormous workload and the dire lack of resources from the government. While he wants to protect the Aboriginal people and their rights, Glendle also fears becoming a paternalistic outsider. His struggles give Davidson insight into just how complex the issues around Aboriginal communities are. Glendle also advises Davidson to be kinder and more accepting to Rick, which helps her begin to see the positive side of her friendship with Rick.

Glendle Quotes in Tracks: A Woman’s Solo Trek Across 1700 Miles of Australian Outback

The Tracks: A Woman’s Solo Trek Across 1700 Miles of Australian Outback quotes below are all either spoken by Glendle or refer to Glendle . For each quote, you can also see the other characters and themes related to it (each theme is indicated by its own dot and icon, like this one:

). Note: all page numbers and citation info for the quotes below refer to the Vintage edition of Tracks: A Woman’s Solo Trek Across 1700 Miles of Australian Outback published in 1995.
Chapter 9  Quotes

The job is made more difficult by the fact that the adviser is more aware than the Aborigines of the possible consequences of their decisions, and wants to protect them. Not becoming a paternal-style protectionist means seeing catastrophic mistakes being made, and not being able to do a thing about it except advise, because you know that the only way the people can learn to deal with the white world is to make such mistakes. There will not always be kind-hearted whitefellas around to save the situation and be a buffer zone.

Get the entire Tracks: A Woman’s Solo Trek Across 1700 Miles of Australian Outback LitChart as a printable PDF.
"My students can't get enough of your charts and their results have gone through the roof." -Graham S.
Download 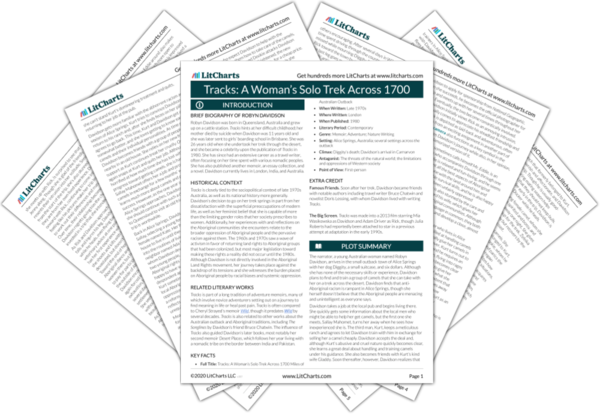 The timeline below shows where the character Glendle appears in Tracks: A Woman’s Solo Trek Across 1700 Miles of Australian Outback. The colored dots and icons indicate which themes are associated with that appearance.

...her experiences, and because Eddie speaks little English, Davidson looks forward to meeting up with Glendle, the white community advisor in the nearby settlement of Pipalyatjara. (full context)

Davidson and Eddie arrive in Pipalyatjara and meet Glendle, a kind and caring man who welcomes them into the caravan where he lives. Davidson... (full context)

While staying with Glendle, Davidson gets a deeper sense of how challenging it is for Aboriginals and community advisors... (full context)

Glendle also helps Davidson work through her own difficulties around the trip and, in particular, her... (full context) 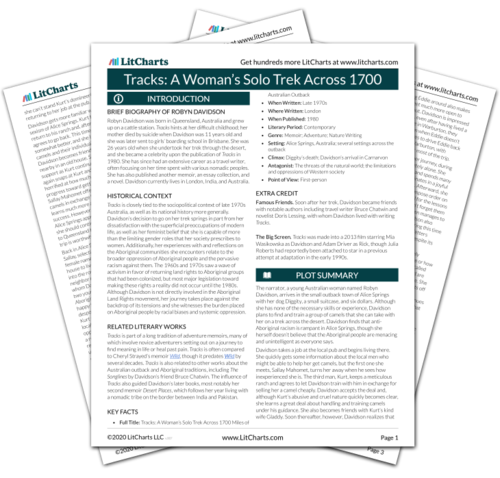 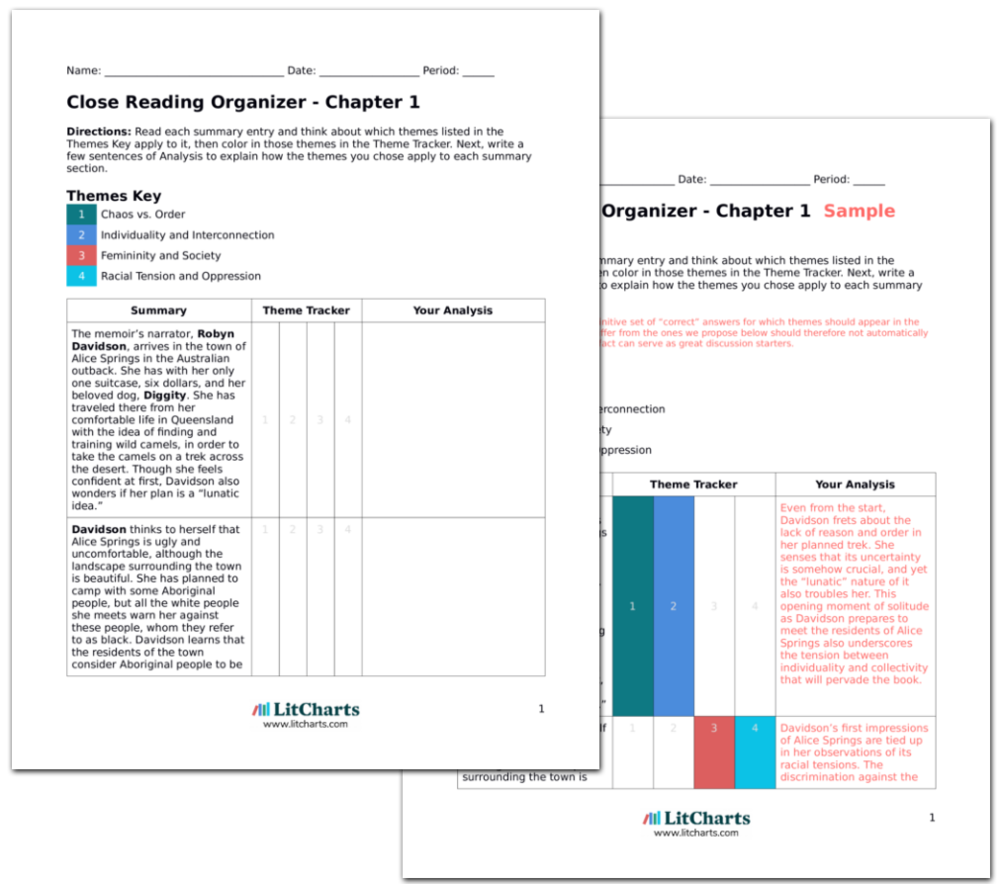