Get LitCharts A+
LitCharts assigns a color and icon to each theme in Turtles All the Way Down, which you can use to track the themes throughout the work.

Turtles All the Way Down presents a cast of characters from a variety of different financial backgrounds. Davis's family is exceptionally rich: they collect art, have a golf course on their property, and built an onsite sanctuary for Mr. Pickett's pet tuatara, Tua. Aza and Mom, by contrast, are solidly middle class—Aza's mom works as a high school teacher, and Aza has a car. Finally, Daisy works at Chuck E. Cheese's to earn money so that she can one day afford to attend night school, shares a bedroom with her younger sister, and types her Chewbacca fanfiction on her phone because she doesn't have a computer. As the characters interact with each other and encounter problems that money can't solve and others that it can, they learn how wealth can make people blind, but doesn’t have to determine everything about who a person is.

Although Davis leads a very comfortable life because of his family’s financial situation, he feels trapped by the reputation and the name that accompany his wealth. His father, Davis Pickett Sr., is one of the most powerful men in Indianapolis, but also one of the most hated. Davis is well aware of his father's reputation and fortune and therefore fears that anyone who befriends him is doing so because of his money. He believes that others see him as having an immense amount of power because of his financial situation. While it's certainly true that Davis can afford to drive a luxury car and is guaranteed to attend a prestigious private college, the actual degree of power that he has is far less than people think he has. Rather than leave his money in a trust for Davis and his brother, Noah, Mr. Pickett instead leaves all of his money to Tua, a lizard-like reptile with a lifespan of up to 150 years. This makes Davis feel unloved by his father, which is notably not a problem that the money itself can solve. Even after Mr. Pickett's disappearance, Davis speaks about his father as though he was often absent and never loving. For Davis, the issue is less about the money and more about the fact that his father was never there for him.

Both Aza and Daisy are shocked at their good fortune when Davis gives them $100,000 to not go to the police with the information they have regarding his father's disappearance. The girls split the money evenly, but both do very different things with it. For Aza, her future after high school suddenly opens up as she realizes that, with the money from Davis, she'll be able to more easily afford to go to college and can possibly even afford to go out of state. For her, her newfound wealth is freeing, though she feels no compulsion to spend any of it right away. Daisy uses her money to “catch up” financially with Aza: she quits her job at Chuck E. Cheese's and buys a car and a laptop—actions that Aza sees as misguided and irresponsible. What Aza doesn't realize is her own privilege in comparison to Daisy. Daisy's life is much harder than Aza's because Daisy doesn't have the same financial advantages as Aza, such as a car, a computer to use for schoolwork, and the privilege of not needing to work. This is verified later, when Daisy remarks how much easier school is when she's not spending all of her non-school hours working.

Rather than come to clear conclusions about how money is best spent or used, the novel instead focuses on the simple fact that possessing money can make a person powerful, though it can also make them blind. When Davis decides to move with Noah to Colorado to attend public school while Noah attends a special school for troubled boys, it's a choice to put love and his relationship with his brother over what his money can buy for him. Similarly, Daisy's parents force her to create a college savings account for her little sister with some of the money she received from Davis. Both Daisy and Davis share their financial power with others, ultimately using their financial power to alleviate someone else's burden. 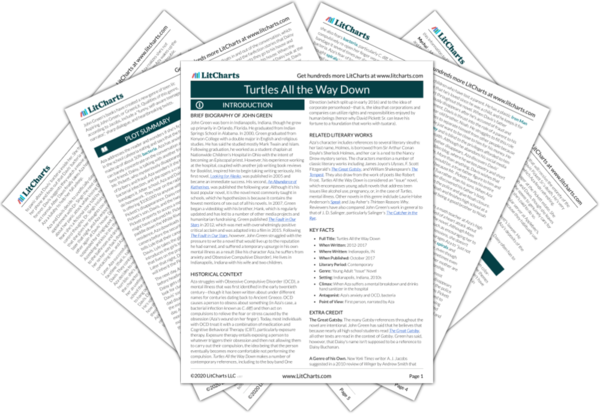 Privilege, Power, and Wealth Quotes in Turtles All the Way Down

Below you will find the important quotes in Turtles All the Way Down related to the theme of Privilege, Power, and Wealth.
Chapter 12 Quotes

"I know you think you're poor or whatever, but you know nothing about being actually poor."
"Okay, I'll shut up about it," I said.
"You're so stuck in your own head," she continued. "It's like you genuinely can't think about anyone else." I felt like I was getting smaller. 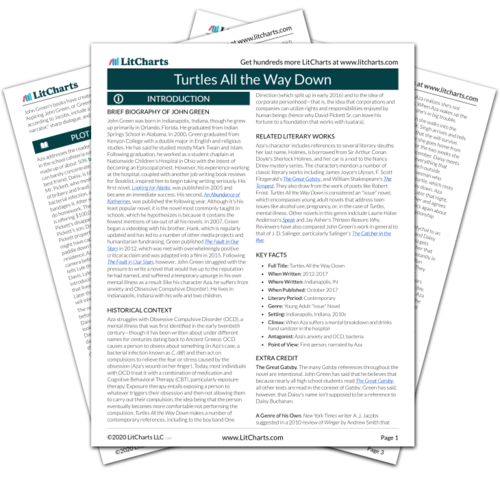 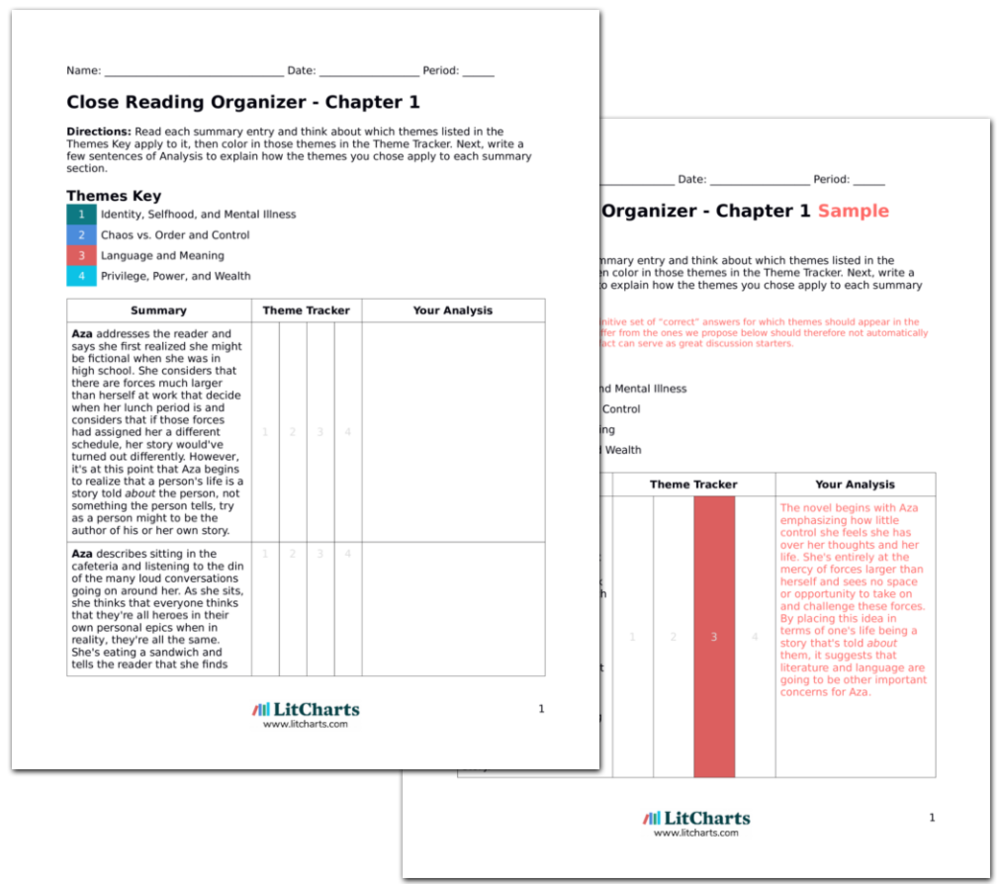