Download this LitChart! (PDF)
Teachers and parents! Struggling with distance learning? Our Teacher Edition on Twilight: Los Angeles, 1992 can help.

A concise biography of Anna Deavere Smith plus historical and literary context for Twilight: Los Angeles, 1992.

A quick-reference summary: Twilight: Los Angeles, 1992 on a single page.

In-depth summary and analysis of every chapter of Twilight: Los Angeles, 1992. Visual theme-tracking, too.

Explanations of Twilight: Los Angeles, 1992's symbols, and tracking of where they appear.

Born in 1950 in Baltimore, Maryland, Anna Deavere Smith is a playwright, actress, and professor. Smith studied acting at Beaver College (now Arcadia University) and later received an M.F.A. in acting from the American Conservatory Theater in San Francisco, California. She acted in stage productions at the beginning of her career, later appearing in numerous films and television series, including The West Wing, Nurse Jackie, For the People, and Philadelphia. Smith is known for her work as an actress and writer in the genre of documentary/verbatim theatre, which uses pre-existing materials such as newspapers, interviews, and journals as source material for the play’s content. Her most famous works in this genre include Fires in the Mirror (1993) and Twilight: Los Angeles, 1992 (1994). Both of these plays belong to her On the Road series of one-woman plays, which draw exclusively from interviews Smith conducts with people living in communities in crisis. Smith boasts numerous awards and accolades, including a nomination for the 1993 Pulitzer Prize for Drama for Fires in the Mirror and Tony Award nominations for Best Actress and Best Play for her work in Twilight: Los Angeles, 1992. In addition, she was a recipient of the 1996 MacArthur Fellowship, as well as the 2012 National Humanities Medal, awarded by President Barack Obama. She has also won two Obie awards. Currently, Smith is a professor in the department of Art & Public Policy at New York University, and she serves as director for the Institute on the Arts and Civic Dialogue. In 2019, she was elected to the American Academy of Arts and Sciences.
Get the entire Twilight: Los Angeles, 1992 LitChart as a printable PDF.
"My students can't get enough of your charts and their results have gone through the roof." -Graham S.
Download 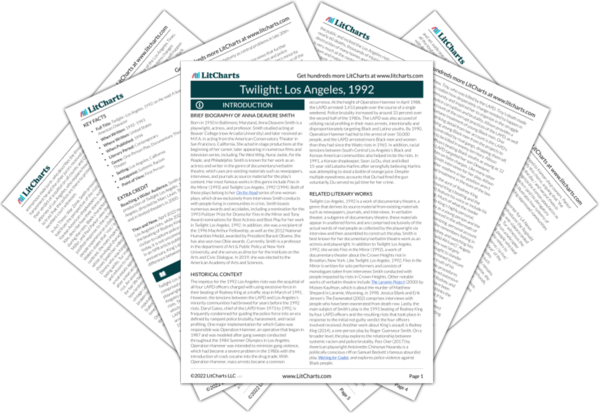 The impetus for the 1992 Los Angeles riots was the acquittal of all four LAPD officers charged with using excessive force in their beating of Rodney King at a traffic stop in March of 1991. However, the tensions between the LAPD and Los Angeles’s minority communities had brewed for years before the 1992 riots. Daryl Gates, chief of the LAPD from 1973 to 1992, is frequently condemned for guiding the police force into an era defined by rampant police brutality, harassment, and racial profiling. One major implementation for which Gates was responsible was Operation Hammer, an operative that began in 1987 and was modeled after gang sweeps conducted throughout the 1984 Summer Olympics in Los Angeles. Operation Hammer was intended to minimize gang violence, which had become a severe problem in the 1980s with the introduction of crack cocaine into the drug trade. With Operation Hammer, mass arrests became a common occurrence. At the height of Operation Hammer in April 1988, the LAPD arrested 1,453 people over the course of a single weekend. Police brutality increased by around 33 percent over the second half of the 1980s. The LAPD was also accused of utilizing racial profiling in their mass arrests, intentionally and disproportionately targeting Black and Latino youths. By 1990, Operation Hammer had led to the arrest of over 50,000 people, and the LAPD arrested more Black men and women than they had since the Watts riots in 1965. In addition, racial tensions between South-Central Los Angeles’s Black and Korean American communities also helped incite the riots. In 1991, a Korean shopkeeper, Soon Ja Du, shot and killed 15-year-old Latasha Harlins after wrongfully believing Harlins was attempting to steal a bottle of orange juice. Despite multiple eyewitness accounts that Du had fired the gun voluntarily, Du served no jail time for her crime.

Twilight: Los Angeles, 1992 is a work of documentary theatre, a genre that derives its source material from existing materials such as newspapers, journals, and interviews. In verbatim theater, a subgenre of documentary theatre, these materials appear in unaltered forms and are comprised exclusively of the actual words of real people as collected by the playwright via interview and then assembled to construct the play. Smith is best known for her documentary/verbatim theatre work as an actress and playwright. In addition to Twilight: Los Angeles, 1992, she wrote Fires in the Mirror (1992), a work of documentary theater about the Crown Heights riot in Brooklyn, New York. Like Twilight: Los Angeles, 1992, Fires in the Mirror is written for solo performers and consists of monologues taken from interviews Smith conducted with people impacted by riots in Crown Heights. Other notable works of verbatim theatre include The Laramie Project (2000) by Moises Kaufman, which is about the murder of Matthew Shepard in Laramie, Wyoming, in 1998. Jessica Blank and Erik Jensen’s The Exonerated (2002) comprises interviews with people who have been exonerated from death row. Lastly, the main subject of Smith’s play is the 1991 beating of Rodney King by four LAPD officers and the resulting riots that took place in response to the initial not guilty verdict the four officers involved received. Another work about King’s assault is Rodney King (2014), a one-person play by Roger Guenveur Smith. On a broader level, the play explores the relationship between systemic racism and police brutality. Pass Over (2017) by American playwright Antoinette Chinonye Nwandu is a politically conscious riff on Samuel Beckett’s famous absurdist play, Waiting for Godot, and explores police violence against Black people.
Key Facts about Twilight: Los Angeles, 1992

Then and Now. April 2022 marked the 30th anniversary of the Los Angeles riots, while 2021 marked the 30th anniversary of the beating of Rodney King. While it was an anomaly for a civilian to capture police violence on camera in the 1990s, today, it is not uncommon due to the prevalence of cell phones. In an NPR article published to commemorate the riots’ anniversary, King’s daughter, Lora King, has stated “the only difference between back then and now is hashtags.” 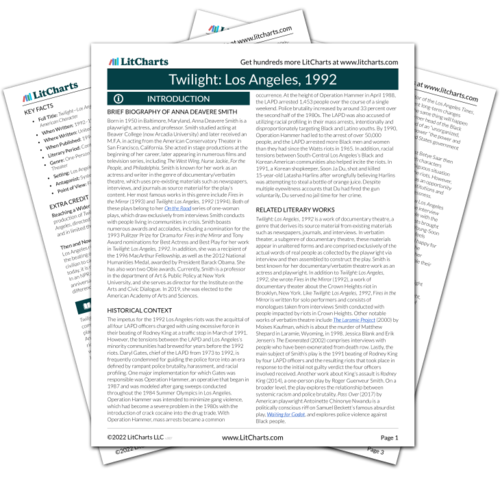 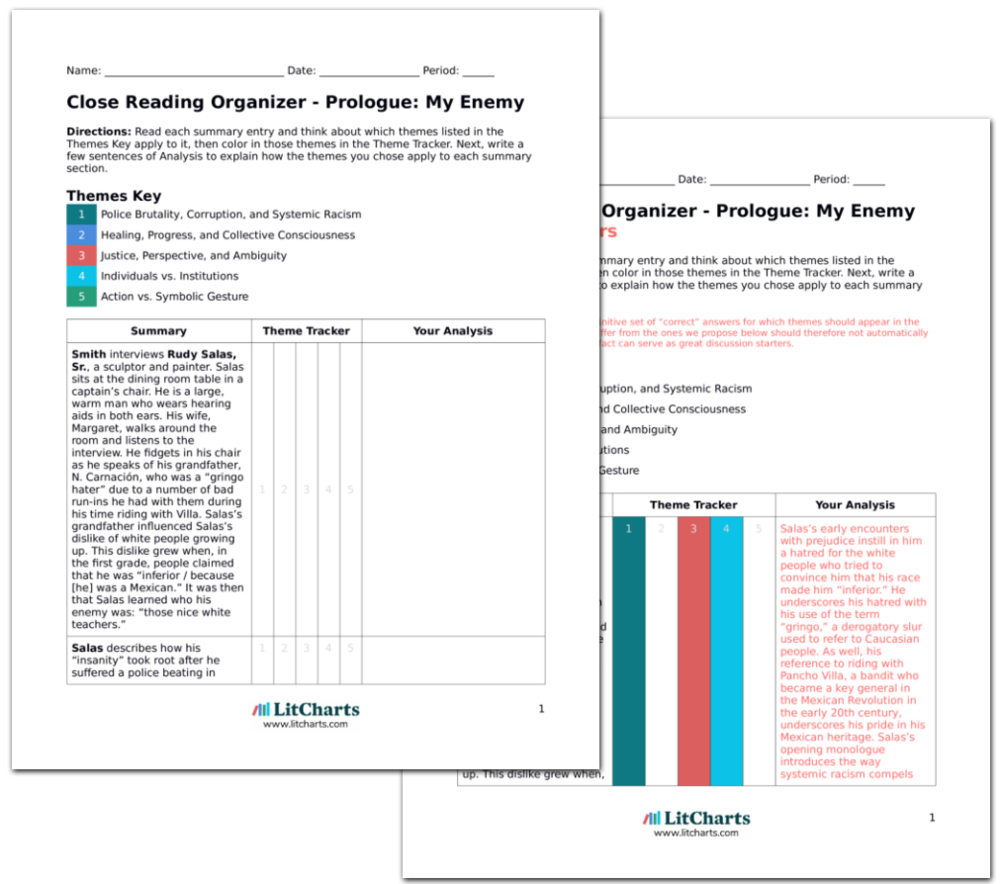