Download this LitChart! (PDF)
Teachers and parents! Struggling with distance learning? Our Teacher Edition on Two Gallants can help.

Welcome to the LitCharts study guide on James Joyce's Two Gallants. Created by the original team behind SparkNotes, LitCharts are the world's best literature guides.

A concise biography of James Joyce plus historical and literary context for Two Gallants.

A quick-reference summary: Two Gallants on a single page.

In-depth summary and analysis of every of Two Gallants. Visual theme-tracking, too.

Explanations of Two Gallants's symbols, and tracking of where they appear.

An interactive data visualization of Two Gallants's plot and themes.

James Joyce was born as one of ten children to John Stanislaus Joyce and Mary Jane Joyce. James’s father was a “rate collector” (similar to a tax collector), but was subsequently dismissed from his job as a result of his heavy drinking and high debts. This dismissal meant that James had to leave his school at the time, as his family could not afford to pay the tuition. Rotating through schools for most of his childhood, Joyce eventually ended up going to college at University College, Dublin, where he studied English, French and Italian. He went on to briefly study medicine in France, but dropped out. His writing career was characterized by fits and starts, as he wrote most of his novels outside Ireland, while teaching English abroad or making money through freelance work (writing reviews, editorials, or––interestingly––singing). In 1904 he met his wife, Nora Barnacle, and they had two children: Lucia and George (often called Giorgio). Joyce published his first book, Dubliners, in 1914, followed by the novels A Portrait of an Artist as a Young Man (1916), Ulysses (1922). Each of these works became progressively more Modernist, and Joyce himself came to be seen as one of the towering Modernist artists, though the stories of Dubliners might also be described as falling into the Realist school. Each book also garnered rave reviews and public controversy for what many saw as their indecency in their focus on issues sexual, scatological, and political. Though Joyce was raised Catholic, he lapsed in adulthood, and later rejected religion entirely. Joyce died just shy of his 59th birthday, of a perforated ulcer. He is buried in Zürich, Switzerland, although there has been discussion concerning returning his body to Ireland.
Get the entire Two Gallants LitChart as a printable PDF.
"My students can't get enough of your charts and their results have gone through the roof." -Graham S.
Download 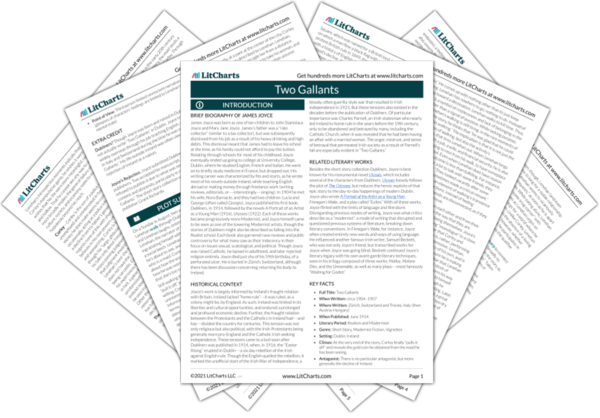 Joyce’s work is largely informed by Ireland’s fraught relation with Britain. Ireland lacked “home rule”––it was ruled, as a colony might be, by England. As such, Ireland was limited in its liberties and cultural opportunities, and endured a prolonged and profound economic decline. Further, the fraught relation between the Protestants and the Catholics in Ireland had––and has––divided the country for centuries. This tension was not only religious but also political, with the Irish Protestants being generally more pro-England and the Catholic Irish seeking independence. These tensions came to a boil soon after Dubliners was published in 1914, when, in 1916, the “Easter Rising” erupted in Dublin––a six day rebellion of the Irish against English rule. Though the English quelled the rebellion, it marked the unofficial start of the Irish War of Independence, a bloody, often guerilla-style war that resulted in Irish independence in 1921. But these tensions also existed in the decades before the publication of Dubliners. Of particular importance was Charles Parnell, an Irish statesman who nearly led Ireland to home rule in the years before the 19th century, only to be abandoned and betrayed by many, including the Catholic Church, when it was revealed that he had been having an affair with a married woman. The anger, mistrust, and sense of betrayal that permeated Irish society as a result of Parnell’s fall are especially evident in “Two Gallants.”

Other Books Related to Two Gallants

Besides the short story collection Dubliners, Joyce is best known for his monumental novel Ulysses, which includes several of the characters from Dubliners. Ulysses loosely follows the plot of The Odyssey, but reduces the heroic exploits of that epic story to the day-to-day happenings of modern Dublin. Joyce also wrote A Portrait of the Artist as a Young Man, Finnegan’s Wake, and a play called “Exiles.” With all these works, Joyce flirted with the limits of language and literature. Disregarding previous modes of writing, Joyce was what critics describe as a “modernist”: a mode of writing that disrupted and questioned previous systems of literature, breaking down literary conventions. In Finnegan’s Wake, for instance, Joyce often created entirely new words and ways of using language. He influenced another famous Irish writer, Samuel Beckett, who was not only Joyce’s friend, but transcribed works for Joyce when Joyce was going blind. Beckett continued Joyce’s literary legacy with his own avant-garde literary techniques, seen in his trilogy composed of three works: Malloy, Malone Dies, and the Unnamable, as well as many plays––most famously “Waiting for Godot.”
Key Facts about Two Gallants

Dubliners? Though Joyce was born and raised in Dublin, he did not actually write “Two Gallants” in Dublin. Joyce travelled widely overseas through his job teaching English, and was living in Italy and Switzerland during the time he was writing “Two Gallants.” His life outside Ireland was often viewed as a rejection of Ireland as a nation.

Joyce’s Rejection. Joyce submitted Dubliners to 15 different publishers. Two accepted his manuscript. One subsequently refused to publish it due to what was seen as inappropriate content and obscenity, particularly in relation to the story “Two Gallants.” The short story collection was finally accepted by the publisher Grant Richards. 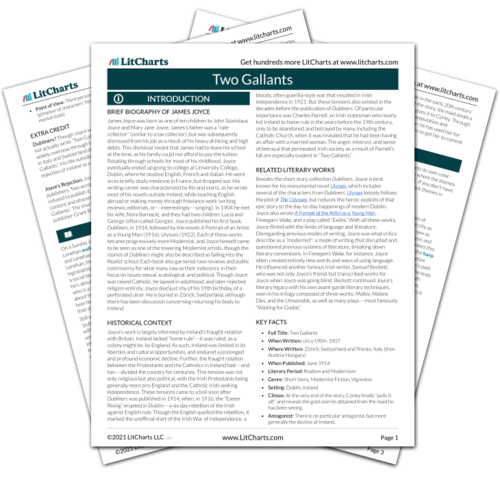 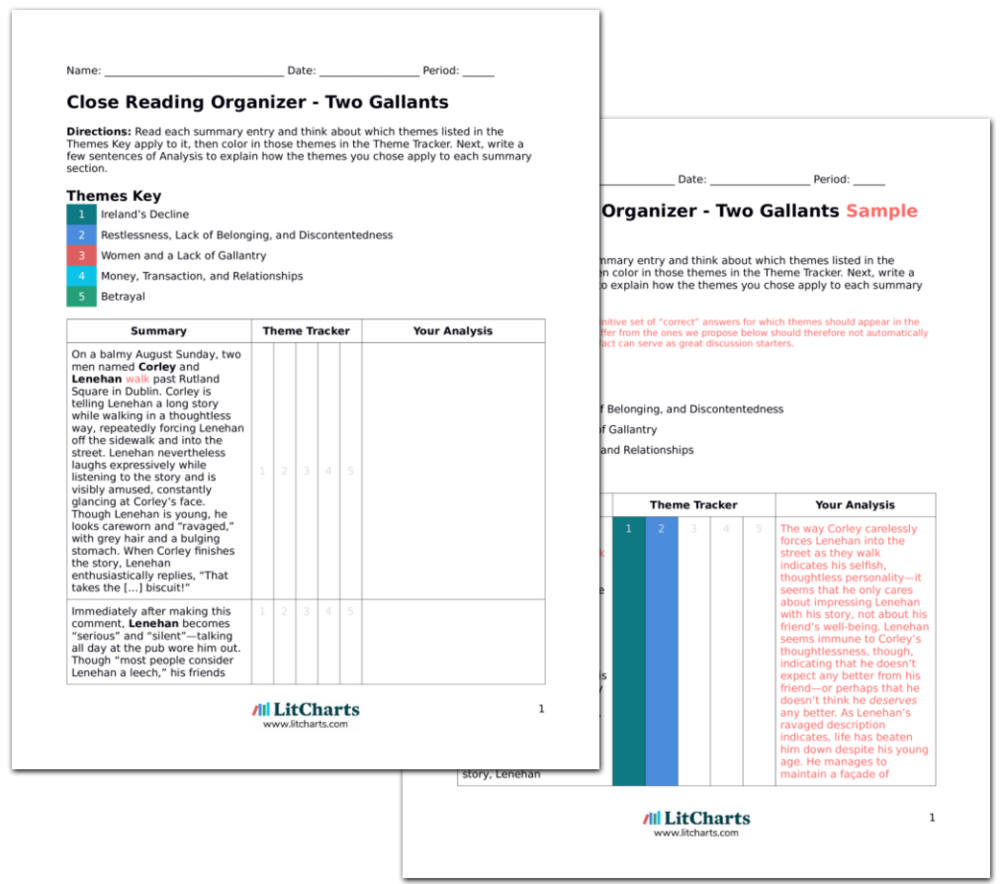