Download this LitChart! (PDF)
Teachers and parents! Struggling with distance learning? Our Teacher Edition on Uglies can help.

Welcome to the LitCharts study guide on Scott Westerfeld's Uglies. Created by the original team behind SparkNotes, LitCharts are the world's best literature guides.

A concise biography of Scott Westerfeld plus historical and literary context for Uglies.

A quick-reference summary: Uglies on a single page.

In-depth summary and analysis of every chapter of Uglies. Visual theme-tracking, too.

Explanations of Uglies's symbols, and tracking of where they appear.

An interactive data visualization of Uglies's plot and themes.

Westerfeld is the youngest of three children. As a young person, his family moved around the U.S. for his father’s job—his father was a computer programmer and worked on the Apollo missions, for Boeing, and on submarines. After receiving his bachelor’s degree from Vassar, Westerfeld worked in a variety of different jobs: a factory worker making lead soldiers, a software designer, a textbook editor, and a ghostwriter. He published his first novel in 1997, but it wasn’t until he published Evolution’s Darling in 2000 that his books began to attract attention and win major awards. In 2004 he began writing for young adults and got his big break a year later with Uglies. Westerfeld is very active online and on social media with his fans of the Uglies series and of the Leviathan series in particular. He and his wife split time between New York and Australia.
Get the entire Uglies LitChart as a printable PDF.
"My students can't get enough of your charts and their results have gone through the roof." -Graham S.
Download 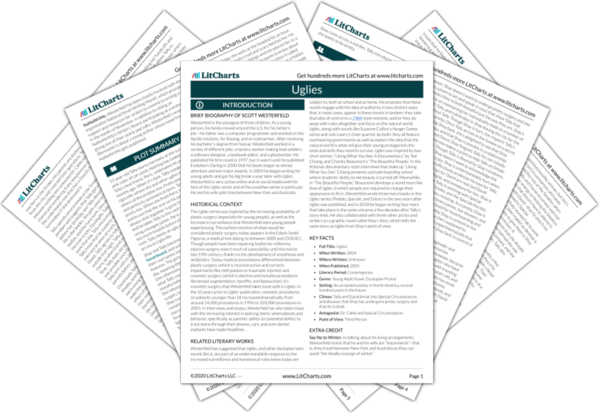 The Uglies series was inspired by the increasing availability of plastic surgery (especially for young people), as well as the increase in surveillance that Westerfeld sees young people experiencing. The earliest mention of what would be considered plastic surgery today appears in the Edwin Smith Papyrus, a medical text dating to between 3000 and 2500 B.C. Though people have been repairing bodies for millennia, elective surgery wasn’t much of a possibility until the mid to late 19th century, thanks to the development of anesthesia and antibiotics. Today, medical associations differentiate between plastic surgery (which is reconstructive and corrects impairments like cleft palates or traumatic injuries) and cosmetic surgery (which is elective and includes procedures like breast augmentation, facelifts, and liposuction); it’s cosmetic surgery that Westerfeld takes issue with in Uglies. In the 10 years prior to Uglies’ publication, cosmetic procedures on patients younger than 18 increased dramatically, from around 14,000 procedures in 1996 to 333,000 procedures in 2005. In interviews and essays, Westerfeld has also taken issue with the increasing interest in policing teens’ whereabouts and behavior, specifically as parents’ ability (or potential ability) to track teens through their phones, cars, and even dental implants have made headlines.

Other Books Related to Uglies

Westerfeld has suggested that Uglies, and other dystopian teen novels like it, are part of an understandable response to the increased surveillance and nonsensical rules teens today are subject to, both at school and at home. He proposes that these novels engage with the idea of authority in two distinct ways that, in most cases, appear in these novels in tandem: they take that idea of control to a 1984-style extreme, and/or they do away with rules altogether and focus on the natural world. Uglies, along with novels like Suzanne Collins’s Hunger Games series and Lois Lowry’s Giver quartet, do both: they all feature overbearing governments as well as explore the idea that the natural world is what will give their young protagonists the tools and skills they need to survive. Uglies was inspired by two short stories: “Liking What You See: A Documentary” by Ted Chiang, and Charles Beaumont’s “The Beautiful People.” In the fictional, documentary-style interviews that make up “Liking What You See,” Chiang presents a private boarding school where students’ ability to see beauty is turned off. Meanwhile, in “The Beautiful People,” Beaumont develops a world more like that of Uglies, in which people are required to change their appearance to fit in. Westerfeld wrote three more books in the Uglies series (Pretties, Specials, and Extras) in the two years after Uglies was published, and in 2018 he began writing four more that take place in the same universe a few decades after Tally’s story ends. He also collaborated with three other artists and writers on a graphic novel called Shay’s Story, which tells the same story as Uglies from Shay’s point of view.
Key Facts about Uglies

Say No to Winter. In talking about his living arrangements, Westerfeld insists that he and his wife are “bisummeral”—that is, they travel between New York and Australia so they can avoid “the deadly scourge of winter.”

NaNoWriMo. Westerfeld has been closely involved with the organization National Novel Writing Month, which provides support and resources for writers to commit to writing a novel in the month of November. In addition to sitting on NaNoWriMo’s Writers’ Board, participating as a writer, and giving one of their yearly pep talks, Westerfeld’s novel Afterworlds is about a young author whose novel from NaNoWriMo gets published. 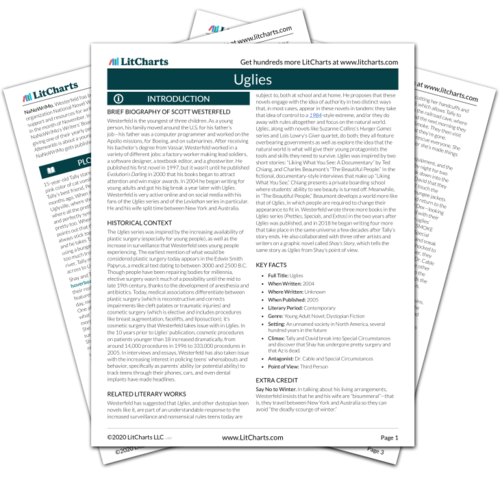 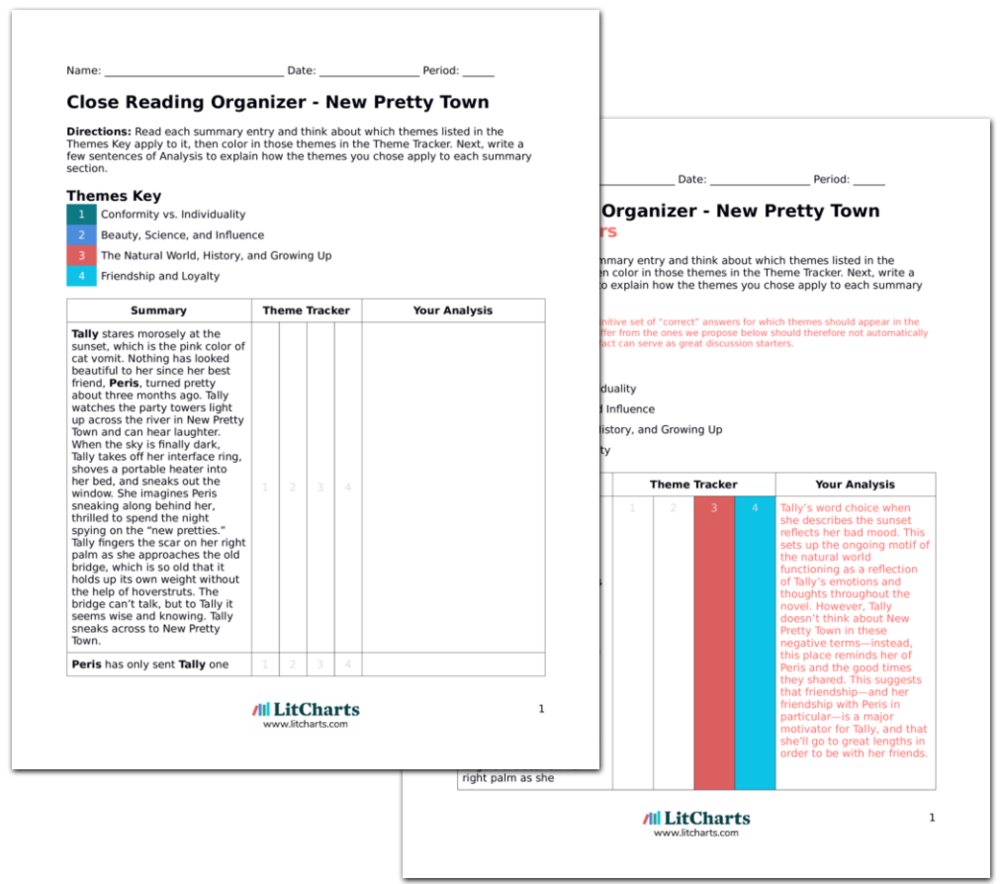