Download this LitChart! (PDF)
Teachers and parents! Struggling with distance learning? Our Teacher Edition on Utilitarianism can help.

Welcome to the LitCharts study guide on John Stuart Mill's Utilitarianism. Created by the original team behind SparkNotes, LitCharts are the world's best literature guides.

A concise biography of John Stuart Mill plus historical and literary context for Utilitarianism.

A quick-reference summary: Utilitarianism on a single page.

In-depth summary and analysis of every chapter of Utilitarianism. Visual theme-tracking, too.

Explanations of Utilitarianism's symbols, and tracking of where they appear.

An interactive data visualization of Utilitarianism's plot and themes.

John Stuart Mill was born in London, the son of prominent Scottish intellectual James Mill—who rose to fame for writing an outlandishly racist and deeply influential history of India, despite never visiting the country—and a mother about whom almost nothing is known, and whom Mill never even explicitly mentions in his autobiography. Hoping to create a genius, Mill’s father raised his son strictly and meticulously, isolating the boy from the world and immersing him in Greek and Latin literature, logic and economics, and most of all utilitarian philosophy. This education included audiences with many of his father’s illustrious friends, including the influential economist David Ricardo and the philosopher Jeremy Bentham, who is generally considered utilitarianism’s founder and Mill’s greatest philosophical influence. Mill’s adolescence was punctuated by a yearlong sojourn in France, a brief attempt to become a lawyer, and a mental breakdown and severe six-month depression that came after he realized that he would be bored, not satisfied, if he managed to undo all the world’s injustices (and also in large part because he was exhausted by his strenuous, overly analytical upbringing). Mill followed his father to the East India Company, where he spent most of his adult life (25 years) as a colonial bureaucrat writing correspondence. Because his job was not difficult, he had plenty of time to write on a wide variety of subjects and remain active in London’s intellectual life, founding and participating in various philosophical and political groups (most notably the Utilitarian Society and Philosophical Radicals). His important works from this period include 1843’s A System of Logic, which made breakthroughs in thinking about scientific proof, essays on Bentham and Coleridge, and a number of books and articles on various political issues—always analyzed in terms of utilitarian principles. During these decades, Mill also married his close friend Harriet Taylor. Taylor died shortly after the British government dissolved the East India Company (including Mill’s job at it) and took direct control of India in 1858. Like his father, Mill remained a staunch defender of British imperialism throughout his whole life: he believed that the British were nobly “improving” the “barbarians” who lived in India and other territories. In contrast, when it came to the rights of British people, Mill was remarkably progressive for his time—after leaving the East India Company, he became an important administrator at University of Saint Andrews and served in the British Parliament, where he advocated for the economic rights of the poor and became the second ever Member of Parliament to come out in favor of extending voting rights to women. These views proved controversial, however, and he lost re-election in 1868, at which point he moved to the town where his wife was buried in France, bought a house and filled it with the furniture from the hotel room in which she died, and lived out his own last five years. Mill remains best remembered for two works in particular, which have cemented his reputation as the most important British philosopher of the 19th century: On Liberty, in which he argues for the protection of individual rights and limits on government authority, and Utilitarianism, his most succinct defense of the ethical theory at the heart of his thought and political career alike.
Get the entire Utilitarianism LitChart as a printable PDF.
"My students can't get enough of your charts and their results have gone through the roof." -Graham S.
Download 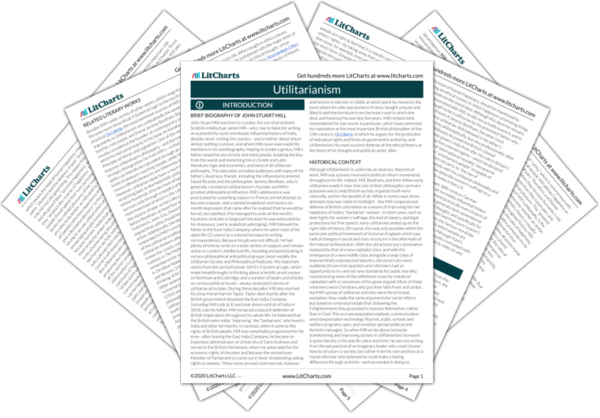 Although Utilitarianism is uniformly an abstract, theoretical work, Mill was actively involved in political reform movements throughout his life. Indeed, Mill, Bentham, and their fellow early utilitarians made it clear that one of their philosophy’s primary purposes was to help British society organize itself more rationally, and for the benefit of all. While in some cases these attempts look less noble in hindsight—like Mill’s impassioned defense of British colonialism as a means of improving the net happiness of India’s “barbarian” natives—in most cases, such as their fights for women’s suffrage, the end of slavery, and legal protections for free speech, early utilitarians ended up on the right side of history. Of course, this was only possible within the particular political framework of Victorian England, which saw radical changes in social and class structure in the aftermath of the Industrial Revolution. With the old aristocracy’s dominance replaced by that of a new capitalist class, and with the emergence of a new middle class alongside a large class of impoverished, unprotected laborers, old social rules were suddenly thrown into question and reformers had an opportunity to try and set new standards for public morality, counteracting some of the selfishness sown by industrial capitalism with a conscience of the general good. Most of these reformers were Christians who put their faith front and center, but Mill’s group of utilitarian activists were the principal exception: they made the same arguments for social reform, but based on a moral principle that (following the Enlightenment) they grounded in humans themselves, rather than in God. This era saw population explode, communication and transportation technology flourish, public schools and welfare programs open, and novelists spread political and feminist messages. So when Mill wrote about seriously transforming and improving society in Utilitarianism, he meant it quite literally, in his specific place and time: he was not writing from the perspective of an imaginary leader who could choose how to structure a society, but rather from his own position as a moral reformer who believed he could make a lasting difference through activism—and succeeded in doing so.

Other Books Related to Utilitarianism

Besides Mill’s wide variety of other works, which range from the even more theoretical A System of Logic to the much more practical On Liberty, the most pertinent sources of Mill’s arguments in Utilitarianism are undoubtedly the works of his teacher, role model, and friend Jeremy Bentham. Bentham is usually considered the founder of contemporary utilitarianism, which he laid out primarily in the book An Introduction to the Principles of Morals and Legislation. One of the most striking features of Bentham’s philosophy—and the one that most strongly distinguishes his from Mill’s—is that Bentham thinks utility can literally be calculated through an algorithm, with all kinds of pleasure counting equally, while Mill insists that certain (more refined) pleasures are inherently better than others. However, utilitarian ideas have a much longer history, stretching back to the hedonistic philosophy of Epicurus, whose hundreds of books have all been lost and whose thinking survives only through a handful of fragments and letters, the most important of which is the Letter to Menoeceus, as well as the reports of later writers like Lucretius, a Roman poet. And, before Bentham, at least four earlier British thinkers—Francis Hutcheson, John Gay, David Hume, and William Paley—also argued that utility should be the main moral concern guiding action. Additionally, the explosion of work that extended and responded to Mill’s conclusions affirms his place at the center of the utilitarian tradition. Just a few of the most important utilitarian thinkers after Mill include: Henry Sidgwick, best known for closely comparing utilitarianism to other ethical systems in The Methods of Ethics (1874); Derek Parfit, who is remembered for similar, much more recent reconciliatory work in On What Matters (2011), as well as his earlier book Reasons and Persons (1984), which illustrates a problem with utilitarian thinking; R.M. Hare, who also combined utilitarianism with other systems, in his case to develop a unique theory of “universal prescriptivism” in books like The Language of Morals (1952) and Moral Thinking (1981); and the analytical philosopher G.E. Moore, who defended a modified version of utilitarianism but argued that pleasure is not the only good in itself (in Principia Ethica, 1903, and Ethics, 1912). The most prominent and controversial 21st-century utilitarian is the Australian philosopher Peter Singer, who is best known for promoting “effective altruism” and re-popularizing utilitarianism in the public sphere through works like How Are We to Live? (1993), The Life You Can Save (2009), and “Famine, Affluence, and Morality” (1972). However, this is only a small fraction of the extensive work on utilitarianism—and a similarly enormous amount of work has also focused on Mill himself, from Nicholas Capaldi’s John Stuart Mill: A Biography (2004) to Roger Crisp’s Mill on Utilitarianism (1997), Alan Ryan’s The Philosophy of John Stuart Mill (1990), and the edited collection of essays John Stuart Mill and the Art of Life (2011). Of course, Mill’s own autobiography (1873) is perhaps the most interesting source on his life. When taught in ethics classes, Mill’s Utilitarianism is usually juxtaposed with the major texts of the two other traditional schools of ethical thought, virtue ethics and deontological ethics: Aristotle’s Nicomachean Ethics and Immanuel Kant’s Groundwork of the Metaphysics of Morals (1785), respectively.
Key Facts about Utilitarianism

Academic Ironies. Although Mill spent his entire childhood reading voraciously and ended up running a university late in life, he never actually completed a degree. 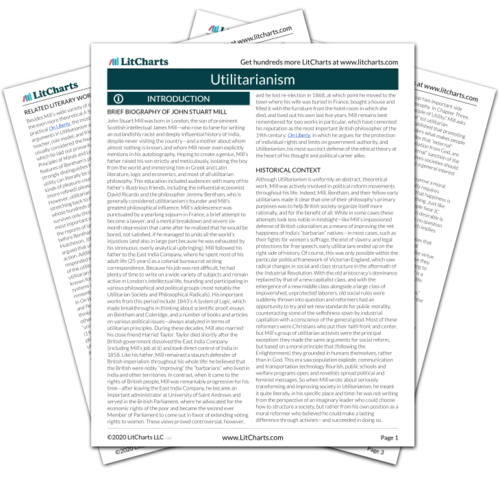 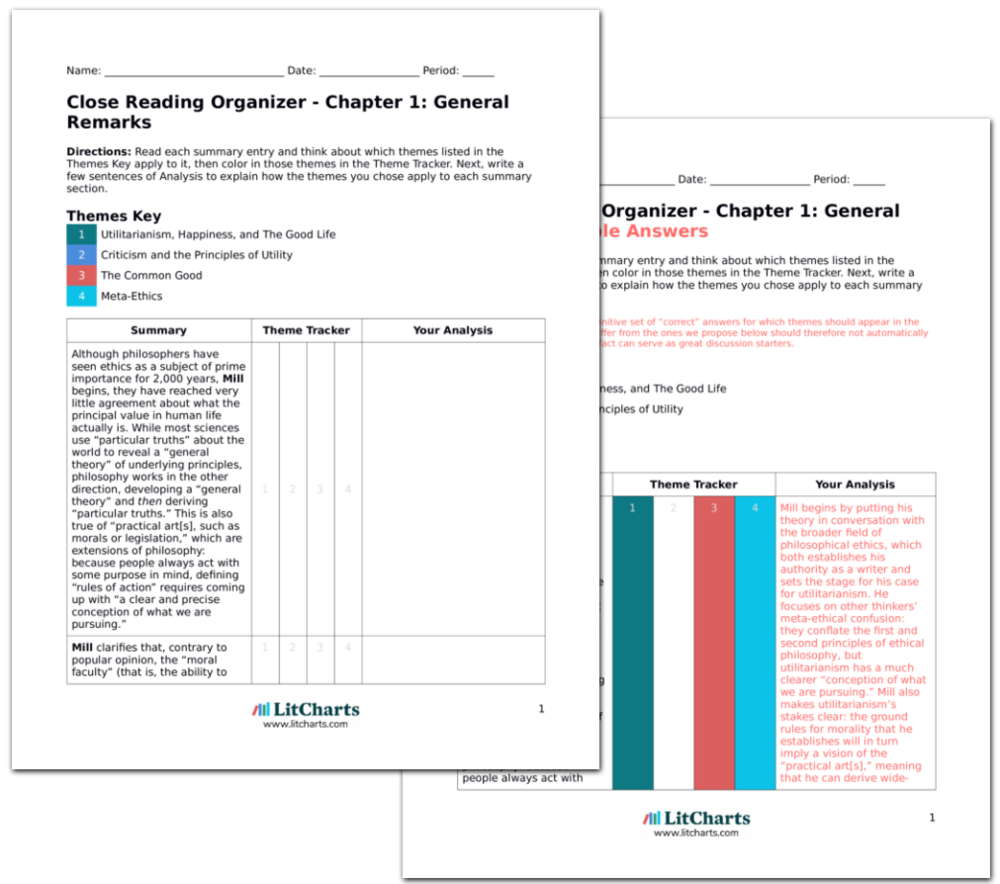