Get LitCharts A+
LitCharts assigns a color and icon to each theme in Walden, which you can use to track the themes throughout the work.

Thoreau deeply values both solitude and society and brings these two seemingly contradictory impulses together in creative, paradoxical ways. On one hand, his purpose in going to Walden, where he stayed for more than two years, is to be alone, so he can "transact some private business." The book is for the most part a record of a man’s time spent in solitude, and the reflections he has in that state. He stresses the importance of an independent life, in which he relies on no one for his everyday existence, and he writes that society’s changing taste is a distraction to personal development. Solitude leaves him open to commune with nature, yet he writes that he is really never alone because he always has the sweet company of the natural world. On the other hand, he entertains many guests in his cabin, sometimes one or two at a time and sometimes in groups of dozens. In addition, he lives not in the wilderness but on the edge of a pond close to the town, which he visits from time to time.

Thoreau takes pleasure in the company of others who live in the woods and describes several of these people in detail in character sketches throughout the book, though these characters never appear again in Walden. Thoreau believes that the community of humankind is constant and has everyone as a member. For him, solitude is, unexpectedly, a way to belong to this community. He believes that a real connection with others depends on a real connection with oneself, so if true society is possible, it stems from each person’s solitude. Reading especially bears out his argument: it allows him to connect in the most profound ways with the greatest minds over time and space and to do so while remaining alone in his cabin.

The ThemeTracker below shows where, and to what degree, the theme of Solitude and Society appears in each chapter of Walden. Click or tap on any chapter to read its Summary & Analysis.
How often theme appears:
chapter length:
Chapter
Economy
1
Where I Lived, an...
2
Reading
3
Sounds
4
Solitude
5
Visitors
6
The Bean-Field
7
The Village
8
The Ponds
9
Baker Farm
10
Higher Laws
11
Brute Neighbors
12
House-Warming
13
Former Inhabitant...
14
Winter Animals
15
The Pond in Winter
16
Spring
17
Conclusion
Con
Get the entire Walden LitChart as a printable PDF.
"My students can't get enough of your charts and their results have gone through the roof." -Graham S.
Download 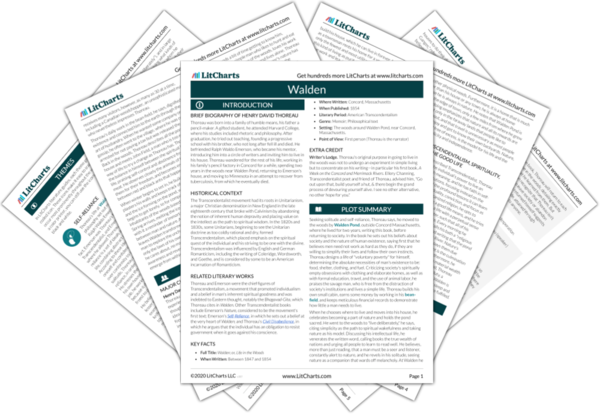 Solitude and Society Quotes in Walden

Below you will find the important quotes in Walden related to the theme of Solitude and Society.
Economy Quotes

Where I Lived, and What I Lived For Quotes

We are wont to imagine rare and delectable places in some remote and more celestial corner of the system, behind the constellation of Cassiopeia's Chair, far from noise and disturbance. I discovered that my house actually had its site in such a withdrawn, but forever new and unprofaned, part of the universe.

Unlock with LitCharts A+
Solitude Quotes

I experienced sometimes that the most sweet and tender, the most innocent and encouraging society may be found in any natural object, even for the poor misanthrope and most melancholy man. There can be no very black melancholy to him who lives in the midst of nature.

Unlock with LitCharts A+
Visitors Quotes

I had three chairs in my house; one for solitude, two for friendship, three for society.

Objects of charity are not guests.

Unlock with LitCharts A+
The Village Quotes

I was never molested by any person but those who represented the State.

Be a Columbus to whole new continents and worlds within you, opening new channels, not of trade, but of thought... It is easier to sail many thousand miles... than it is to explore the private sea, the Atlantic and Pacific Ocean of one's being alone.

I learned this, at least, by my experiment; that if one advances confidently in the direction of his dreams, and endeavors to live the life which he has imagined, he will meet with a success unexpected in common hours. He will put some things behind, will pass an invisible boundary; new, universal, and more liberal laws will begin to establish themselves around and within him... and he will live with the license of a higher order of beings. In proportion as he simplifies his life, the laws of the universe will appear less complex, and solitude will not be solitude, nor poverty poverty, nor weakness weakness.

If a man does not keep pace with his companions, perhaps it is because he hears a different drummer. Let him step to the music which he hears, however measured or far away.

Rather than love, than money, than fame, give me truth.