Get LitCharts A+
The protagonist of the play. Elliot is Yaz’s cousin, Odessa’s biological son, and Mami Ginny’s adopted son. He is a 24-year-old, Puerto Rican, wounded Iraq War veteran who lives in North Philadelphia. Although Elliot lived with Odessa as a young child, her crack-induced negligence caused the death of his little sister, and Odessa gave him up to be raised by Mami Ginny. He considers Ginny to be his true mom, demonstrating the dynamic nature of familial relationships. As a result, Elliot despises Odessa and the other crack addicts that she mentors, even though he was secretly addicted to painkillers himself for several months while he was in a military hospital. Elliot is plagued with guilt, which is manifested by the Ghost, both for a man he unnecessarily killed in Iraq as well as for all the ways he could have taken better care of his family. Elliot is also ashamed of how poor he and his Puerto Rican family are, making him an altogether miserable character. However, he is buoyed by his close relationship with Yaz and his aspirations to someday be an actor and escape all of the vices and addictions that plague his family. When Mami Ginny dies of cancer, Elliot—who’d been her caretaker—is given the freedom to leave home and move to Los Angeles to pursue his dream and escape the grim fate so many of his family members have met. Although Elliot never reconciles with or forgives Odessa, he does recognize his own guilt in the ways that he’s hurt her by the end of the story and seems slightly more open to the possibility of reconciling someday in the future.

Elliot Ortiz Quotes in Water by the Spoonful

The Water by the Spoonful quotes below are all either spoken by Elliot Ortiz or refer to Elliot Ortiz. For each quote, you can also see the other characters and themes related to it (each theme is indicated by its own dot and icon, like this one:

). Note: all page numbers and citation info for the quotes below refer to the Theatre Communications Group edition of Water by the Spoonful published in 2017.
Scene One Quotes 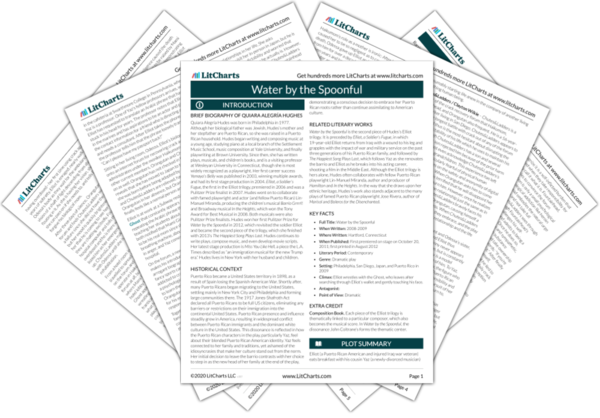 Elliot Ortiz Character Timeline in Water by the Spoonful

The timeline below shows where the character Elliot Ortiz appears in Water by the Spoonful. The colored dots and icons indicate which themes are associated with that appearance.

Elliot, a Puerto Rican Iraq War veteran who has a permanent limp and is wearing a... (full context)

In response, Yaz tells Elliot that she is finally signing the papers for her divorce from her husband William. Elliot... (full context)

Professor Aman, the man who they’d been waiting for, arrives. Elliot asks Yaz to let them speak in private for a couple minutes. After she leaves,... (full context)

Elliot sits behind the counter of a Philadelphia Subway restaurant, answering the phone. A friend of... (full context)

As Elliot is writing down the customer’s order, a Ghost appears, speaking the same Arabic phrase that... (full context)

Yaz receives a phone call and tells her class to take a short break. Elliot is on the phone, telling her that his dad just texted him to say, “Your... (full context)

Yaz sits in a flower shop reading brochures. Elliot arrives, his limp even more pronounced. Elliot tells her that he blew off some steam... (full context)

...arrangement to buy for the funeral, hoping for something that looks like Mami Ginny’s garden. Elliot refuses to have anything with carnations since it makes them look poor. Although Yaz has... (full context)

Elliot wants Yaz to conduct the funeral, since she speaks publicly all the time as a... (full context)

Yaz agrees to conduct the service, so long as Elliot will call her ex-husband and tell him not to come to the funeral, since in... (full context)

Yaz and Elliot sit in the flower shop, wondering how they will pay for the arrangement and watching... (full context)

...now, she wishes she’d never been given the prep-school scholarship and left the barrio. Although Elliot thinks it is better that she left, she worries that now that Mami Ginny is... (full context)

While the forum members share their favorite recovery slogans with each other, Elliot is in a boxing gym punching a bag, coaching himself to ignore the pain in... (full context)

Yaz and Elliot enter and find Odessa, whom Elliot reveals to be his biological mom, though he was... (full context)

However, before John can leave, Elliot asks if he knows what happened to Odessa’s daughter. Odessa is pained and angry, but... (full context)

Despite how sick Elliot is, Odessa’s tenderness and the attention she is paying his sister and him feel wonderful.... (full context)

In Odessa’s living room, Elliot and Yaz look at Odessa’s “stone age” computer. Yaz remarks that the computer is the... (full context)

Yaz and Elliot stand together at the front of a church, conducting Mami Ginny’s funeral and commemorating her... (full context)

As Yaz and Elliot are speaking, Odessa sits in her living room with a cup of water and a... (full context)

Orangutan lies asleep on the train platform in Sapporo. At Odessa’s house, Yaz and Elliot yell for her outside her locked door. When she does not answer, Elliot kicks the... (full context)

Yaz calls her own mom, since she will likely be faster than the ambulance, and Elliot grabs the phone and tells her that she needs to hurry and get here before... (full context)

...if she must. The light disappears as the ambulance arrives, and Yaz tells a confused Elliot that he must forgive his mom. (full context)

Elliot tells her to close the computer; he doesn’t want to be reminded of Philadelphia while... (full context)

Elliot thinks those goals sound okay, but Yaz denies it, especially compared to what Odessa did... (full context)

...to make a phone call, and as soon as she is gone, the Ghost appears. Elliot calls for Yaz but she does not return. As the Ghost reaches to touch Elliot,... (full context)

In Puerto Rico, Elliot stands on an outcropping overlooking a waterfall. Yaz is distracted, digging up plants and putting... (full context)

Elliot is excited for her. However, as they get ready to toss Mami Ginny’s ashes over... (full context) 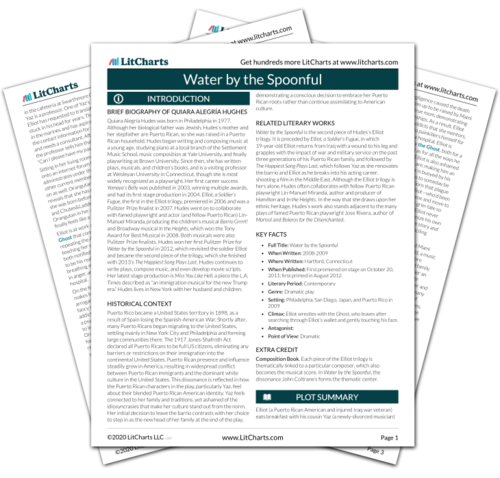 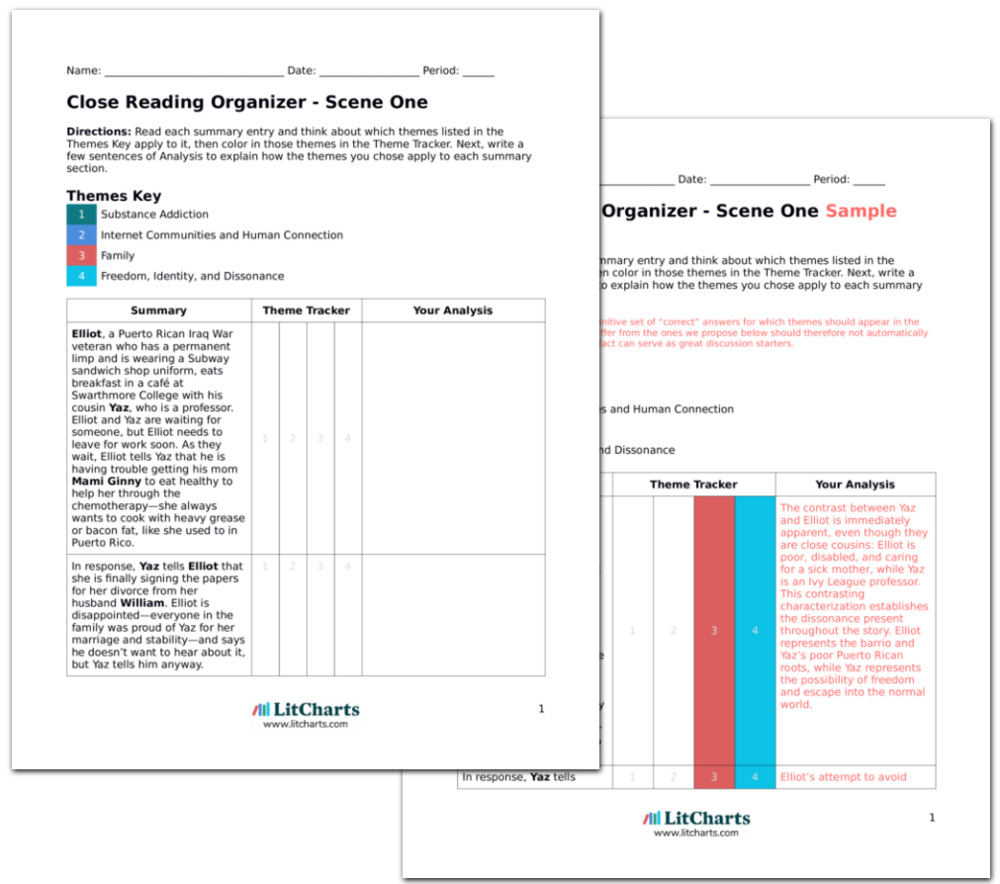