We unfolds over the course of 40 “Records” written by the novella’s narrator, D-503. The action takes place in the distant future in the One State, a civilization ruled over by an authoritarian government. D-503 works as a mathematician and engineer, and is the lead designer of the Integral, a rocket ship the One State will use to travel to alien planets to spread the doctrine of complete subservience to the government and an absolute reliance on logic, mathematics, and rationality to govern public life. D-503 writes his records to be read by the conquered alien civilizations so that they might have a better understanding of the values and history of their new authoritarian overlords.

A God-like, cruel dictator known as the Benefactor rules over the One State. The Benefactor believes that the freedom of individuals is secondary to the welfare of the State. As such, citizens (called “ciphers”) live under the oppressive, hyper-watchful eye of government-appointed police offers called Guardians. The One State is cut off from the wild, free world by a massive barrier called the Green Wall. Ciphers live in transparent, glass houses. The government rips them of their individuality, forcing them to wear identical uniforms (“unifs”) and harshly condemning all acts of personal expression. Ciphers’ daily lives are precisely organized around a carefully controlled scheduled called the Table of Hours. Even their sex lives are not in their own hands: the State assigns ciphers sex partners, and they must request a “pink ticket” to engage in scheduled, passionless sex with their state-sanctioned partners. Should ciphers break any of the State’s strict laws, they are punished by execution via a mechanical contraption known as the Machine of the Benefactor.

In his early records, D-503 is completely subservient to the One State. He fully subscribes to the government’s idea that the collective’s welfare is more important than individuals’ personal freedom, believing that happiness is achieved through a commitment to logic and rationality and the removal of desires. As the plot unfolds, however, he gets more in touch with his human side, and his records become more expressive, irrational, and confused.

One day, while on an assigned walk with O-90, his regular sex partner, D-503 runs into a female cipher named I-330 and a male cipher, S-4711, whom D-503 recognizes as a Guardian. I-330 flirts shamelessly with D-503, which is against State protocol. D-503 is uncomfortable with her advances because he can’t figure out what motivates her to act so boldly and rebelliously. He states that she has an “irritating X” about her personality. Still, he finds himself equally repulsed and attracted to this mysterious female cipher.

One day, I-330 invites D-503 to accompany her to the Ancient House. Once there, I-330 leads D-503 to an apartment and dons an old-fashioned yellow dress that accentuates her feminine features. D-503 is aroused. I-330 tries to convince him to stay with her after the Personal Hour ends, explaining that she has a doctor friend at the Bureau of Medicine who will write them both phony sick notes to get them out of work. The enthusiasm with which I-330 dismisses her obligations to the One State appalls D-503, though. He refuses her offer and vows to report her behavior to the Bureau of Guardians. Despite his supposed hatred for I-330 and her subversive behaviors, D-503 finds himself unable to report her to the authorities, claiming that he doesn’t have time to do so. Instead of going to the Bureau of Guardians, he goes to the Bureau of Medicine, claiming he is sick.

One day, I-330 files a request for D-503 to meet her in her room for sex. He meets her there and she proceeds to smoke cigarettes and drink alcohol, both of which are against the law. I-330 slips some alcohol into D-503’s mouth and he becomes inebriated, impassioned, and suddenly in touch with his animalistic side, which he refers to as his “other” self. In the throes of passion, I-330 insinuates that she has another lover, which causes D-503 to become jealous. He suddenly grabs her with his “shaggy paws” (his term for his unusually hairy, animal-like hands) and bites her flesh. The Personal Hour ends before they can have sex. Eventually, D-503 and I-330 get phony sick-notes from I-330’s doctor friend at the Bureau of Medicine. They ditch work and engage in un-sanctioned, passionate sex at the Ancient House. Immediately after the encounter, I-330 disappears mysteriously from the premises. The next evening, D-503 has a Sex Day with O-90, but he’s unable to perform. O-90 is crushed. D-503 acknowledges that although I-330 is destroying his relationships with O-90 and his poet friend, R-13, he’s unable to stop loving her.

D-503 reports to work at the hangar and the Second Builder of the Integral informs him that an unnumbed cipher broke into the hangar while he was out sick yesterday. Guardians escorted the cipher away and forced him to undergo the Operation, a surgical procedure that destroys the mind’s capacity for imagination. D-503 is ambivalent toward the procedure, noting that while he knows he is obligated to behave rationally and efficiently for the State, he doesn’t necessarily want to submit to the Operation to cure his “sickness,” even if this sickness makes him sleepless, irrational, and miserable.

D-503 hasn’t heard from I-330 since she disappeared from the Ancient House and he becomes lovesick and desperate to see her again. As he searches for her, he realizes he will be late to work, so he goes to the Bureau of Medicine to obtain a sick note. There, D-503 is diagnosed with having a “soul,” or imagination, which the State considers a grave condition, as it makes ciphers less machine-like. I-330’s skinny doctor friend instructs D-503 to take more walks to cure him of the insomnia, dreaming, and irrational thinking brought on by his “soul.”

Per the doctor’s orders, D-503 takes a walk the next day. As he edges along the Green Wall toward the Ancient House, he spots a hairy, beastly human with yellow eyes on the other side of the Wall and wonders whether this barbaric person is happier than he is. D-503 arrives at the Ancient House in search of I-330. He discovers a secret passageway in the closet of the apartment where they spend time together. D-503 passes out. When he regains consciousness, he is at the end of a corridor. He follows voices and eventually finds I-330 and the skinny doctor. D-503 demands that I-330 tell him where he is and what’s going on. She promises that she will.

Shortly after this, O-90 writes D-503 a letter telling him she can no longer bear to see him since he is in love with I-330. She vows to remove herself from his sex list. A couple days later, D-503 returns to his apartment to find O-90 waiting for him. She pleads with him to give her a baby—something she has always wanted, despite the State’s forbiddance. D-503 honors her request, even though he knows the state will punish O-90 severely. Later, during the Day of the One Vote (the One State’s election day) dissenters interrupt the normally peaceful electoral process by voting against the Benefactor. The One State condemns these rebels in the newspaper the next day, calling them “the enemies of happiness.”

Later that day, D-503 goes to the Ancient House to meet I-330. She brings him to the free world beyond the Green Wall, where he sees a massive crowd of hairy, naked people. I-330 addresses them, announcing the rebels’ plans to steal the Integral. She introduces D-503 as the Integral’s builder. The crowd cheers for him and he feels good to be a special individual. I-330 hands D-503 a drink and his memory becomes fuzzy, though he recalls seeing S-4711 among the crowd of naked people, which makes him uneasy. S-4711 has been watching D-503 closely for some time, which makes D-503 paranoid but also grateful that S-4711’s authoritative presence might prevent him from acting against the One State.

In the days after D-503’s trip to the free world, I-330 fills him in on the structure and origins of MEPHI, the rebel organization with which she is involved. MEPHI’s goals are to overthrow the One State and restore freedom and individuality to its people. I-330 tells D-503 that during the Integral’s first test flight (the day after tomorrow) MEPHI will seize control of the Integral and use it to overthrow the One State. D-503 agrees to betray the State and join forces with MEPHI, though he is highly conflicted and anxious about his decision.

24 hours before the Integral’s test flight, D-503 walks outside and runs into a mass of zombie-like ciphers who’ve undergone the Operation. They try to force D-503 to join them and receive the Operation as well. D-503 flees the scene and runs into O-90, now visibly pregnant, who is also hiding from the post-Operation ciphers. Fearing for the safety of her unborn child, O-90 accepts D-503’s offer to help her escape across the Green Wall to freedom.

On the day of the Integral’s scheduled test flight, growing acts of civil disobedience cause the One State to push back the mission an extra day. On the day of the rescheduled flight, D-503 attempts to steal the Integral, but somebody has alerted the authorities to MEPHI’s plan. The Integral returns to the One State intact and protected. I-330 accuses D-503 of betraying her. He denies her accusation. D-503 eventually realizes that it was U, the woman who monitors the front desk at D-503’s apartment, who—out of concern for D-503 and jealousy toward I-330—alerted the authorities to MEPHI’s plans. Enraged, D-503 attempts to murder her, but he is summoned to the Benefactor’s chambers before he can do so. The Benefactor condemns D-503’s disloyal actions and tells him that I-330 was only pretending to love him and had been using him to get to the Integral. D-503 leaves the Benefactor and returns to I-330. They say goodbye, but their romance has fizzled out and their parting is cold and impersonal.

The Guardians come to D-503’s apartment and he submits to the Operation. His final record differs vastly from those in the middle portion of We in that it is devoid of emotion or subjective expressionism. He informs the reader that he turned over I-330 to the Guardians. Although the Guardians tortured her, she refused to betray her cause. We ends with D-503’s resounding confidence in the One State. Although enemies of the state still exist, D-503 knows that the State will persevere, as it values reason above all else, and “reason should win.” 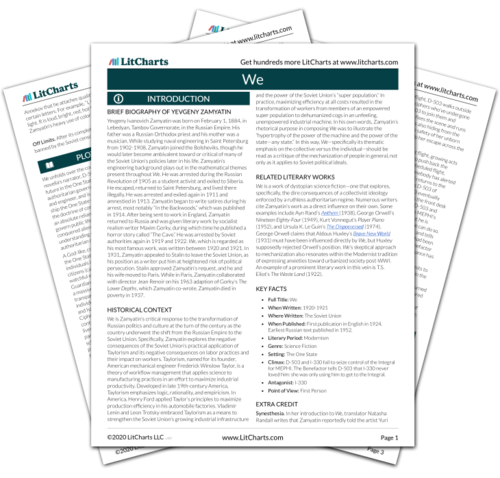 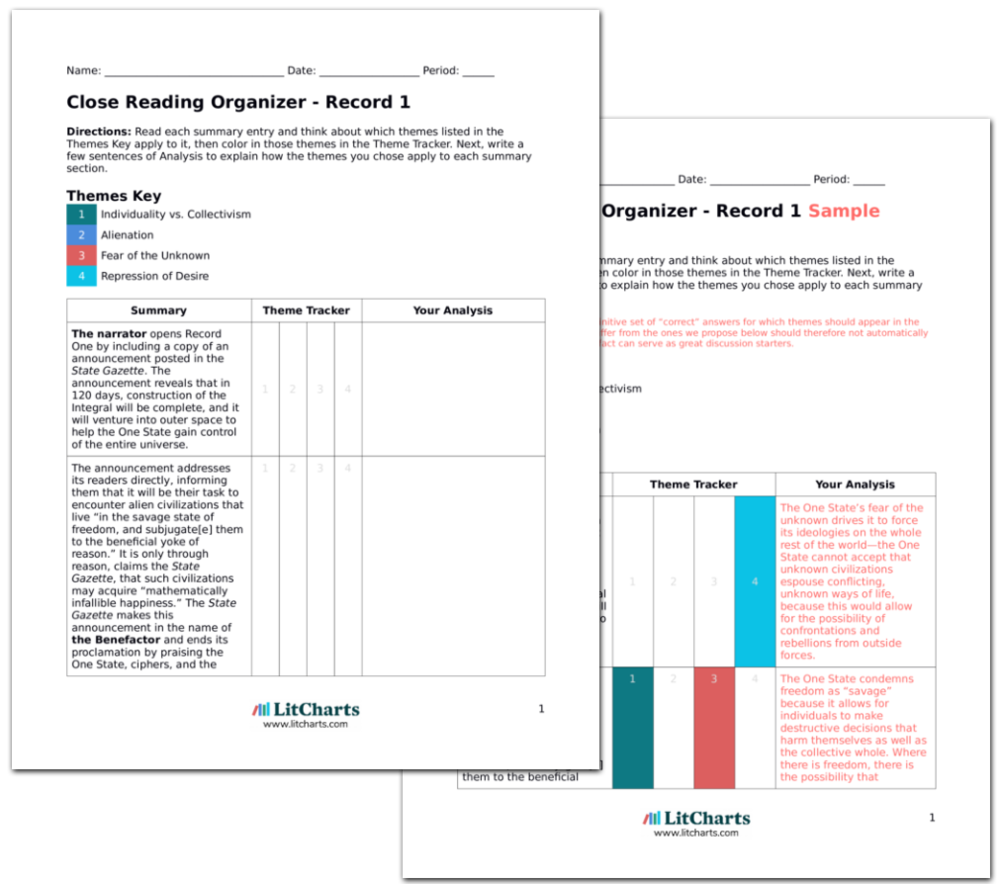