Jackson’s grandmother’s powwow regalia represents the property that white people’s destruction of American Indian people’s property, cultures, and identities. The regalia was stolen from Agnes 50 years before the events of the story—but rather than having what is rightfully is returned to him for free, the pawnbroker makes Jackson earn it back by sending him on an impossible quest for $1,000. In this way, the pawnbroker symbolizes white Americans more broadly, and the regalia symbolizes the land, cultural practices, artifacts, and other material possessions that they’ve taken from American Indians for generations. These stolen possessions should be returned to their rightful owners, but American society, just like the pawnbroker, is unwilling to shoulder the economic cost of making reparations to American Indians.

The powwow regalia also reveals how violence and theft have disrupted the generational transfer of cultural knowledge in American Indian communities and have left the younger generations, like Jackson’s, feeling disconnected from their cultural identities. Jackson never got to see his grandmother dance in her regalia and desperately wishes that he had; in fact, he sees his quest to retrieve it as a way to bring her lost cultural knowledge back into his life. When he finally gets the regalia back, Jackson is able to symbolically reconnect with a piece of his cultural identity that had been missing.

The Powwow Regalia Quotes in What You Pawn I Will Redeem

The What You Pawn I Will Redeem quotes below all refer to the symbol of The Powwow Regalia . For each quote, you can also see the other characters and themes related to it (each theme is indicated by its own dot and icon, like this one: 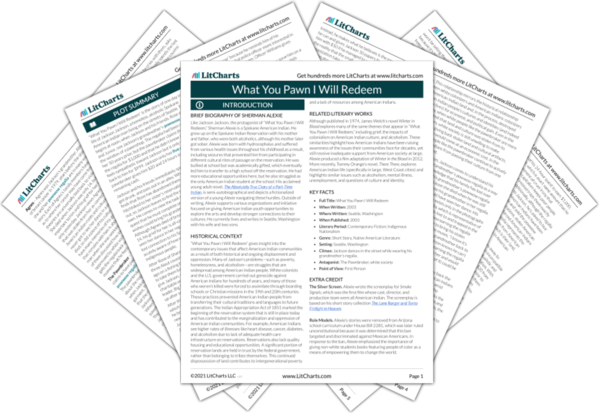 The timeline below shows where the symbol The Powwow Regalia appears in What You Pawn I Will Redeem. The colored dots and icons indicate which themes are associated with that appearance.

...Jackson has never noticed before. In the window of the pawnshop is an old powwow-dance regalia that Jackson immediately recognizes as his grandmother’s. It was stolen from her 50 years prior.... (full context)

Inside the pawn shop, Jackson tells the old white pawnbroker that the regalia is his grandmother’s, which was stolen 50 years ago. The pawnbroker is suspicious, which Jackson... (full context)

When Junior starts to tell the pawnbroker that the regalia has been missing for 50 years, Jackson tells Junior that it’s his family’s story, so... (full context)

...and last name are both Jackson. While the pawnbroker is willing to sell Jackson the regalia for $999—taking a one-dollar loss would be, he says, “the moral thing to do”—Jackson only... (full context)

The pawnbroker steps into the back room, where he’s moved Jackson’s grandmother’s powwow regalia from the front window. He holds the regalia out to Jackson and tells him to... (full context)

Jackson walks outside with his grandmother’s powwow regalia in hand. He knows that he is a part of the hidden yellow bead, and... (full context)

...an alley while they brainstorm different ways to come up with the money for the regalia. (full context)

...could have leaked out from her broken heart and into her breasts after her powwow regalia was stolen. If he earns back the regalia, he might also be able to bring... (full context)

...to make so much money so quickly. Jackson explains the story of his grandmother’s powwow regalia, and Big Boss suggests that they call the police instead. But Jackson is opposed this,... (full context)

...he wins the $500 cash prize on both he’ll have enough for his grandmother’s powwow regalia. Jackson is in love with Kay, the cashier at the Korean grocery, and tells her... (full context)

...keep him a day, and he’ll miss the deadline to buy back his grandmother’s powwow regalia. Officer Williams says that the right way to go about getting the stolen regalia back... (full context)