Though “When Mr. Pirzada Came to Dine” is about decidedly adult subject matter—the Bangladesh Liberation War of 1971, which was a time of mass death and displacement for Bangladeshis (then known as East Pakistanis)—it is told through the context of the narrator, Lilia’s, childhood. Each night, Lilia, who lives in a quiet suburb of Boston, watches the news on TV and sees children her own age in East Pakistan trying to survive the violent conflict. Her previously sheltered worldview is further complicated as she gets to know Mr. Pirzada, an East Pakistani family friend whose wife and daughters back home are among those most affected by the war. While at first Mr. Pirzada babies Lilia, presenting her with candies and worrying over her safety, their roles gradually reverse, as Lilia starts trying to take care of Mr. Pirzada, praying for him and trying to lighten his stress about his family. The more Lilia begins to assume responsibility for Mr. Pirzada’s well-being, the more she comes to terms with the war’s brutality, and the less she is able to maintain her innocent, youthful perspective. These shifting roles suggest that outside circumstances can sometimes force young people to come of age before they’re necessarily ready, and that facing difficult truths and taking care of others are cornerstones of maturation.

At the beginning of “When Mr. Pirzada Came to Dine,” Lilia is youthful and innocent, shielded from the world by the adults in her life. Though Lilia’s father is frustrated that Lilia does not know about the conflict in East Pakistan, Lilia’s mother is “genuinely proud” that Lilia has not had to endure the instability and violence that her parents did in their own youths. Lilia’s lack of knowledge about hardship is therefore the result of an intentional effort by her parents to raise her in relative safety and peace. Indeed, from the comfort of her suburb, Lilia is free to delight in various childish pleasures: construction-paper dioramas, field trips, and trick-or-treating. Most of all, she looks forward to the candy Mr. Pirzada brings her: “the steady stream of honey-filled lozenges, the raspberry truffles, the slender rolls of sour pastilles.” Lilia’s focus on and love of these candies speaks to her innocence, while Mr. Pirzada’s self-professed desire to “spoil” her demonstrates the extent to which the adults in her life care for her and want to preserve her innocence.

However, Lilia’s exposure—through her parents, Mr. Pirzada, and the TV news—to the conflict in East Pakistan forces her to learn more about the world and her place in it. On the news, Lilia sees “tanks rolling through dusty streets, and fallen buildings, and forests of unfamiliar trees into which Pakistani refugees had fled.” More importantly, she watches Mr. Pirzada as “the images flashed in miniature across his eyes.” Here, Lilia is not only exposed to massive carnage and destruction for the first time, but through Mr. Pirzada, she becomes aware that such pain can directly affect the people in her life. After Lilia’s father tells her to pay attention to what’s happening on the news—what “children her age” have to “do to survive”— Lilia finds herself unable to eat her dinner. Confronted with the degree of pain that children just like herself have to deal with—and aware, for the first time, that her own innocence is a privilege—Lilia loses her appetite. Perhaps motivated by her newfound understanding of hardship, Lilia begins to grow more curious about the world around her. Even after she is sent to bed, she listens to her parents’ conversations with Mr. Pirzada. At school, she begins to read a book about Pakistan in the library. Lilia’s curiosity shows that she’s no longer comfortable with her sheltered ignorance of the world beyond her small suburb. Even though her parents still shield her from the worst of the conflict, Lilia is now determined to find out information on her own, reflecting her growing maturity.

By the end of the story, Lilia has seen that life can be painful and difficult—and where she once was protected from these unpleasant truths, her new awareness now makes her want to confront reality and protect others. “I prayed that Mr. Pirzada’s family was safe and sound,” Lilia explains, “I had never prayed for anything before, had never been taught to, but I decided, given the circumstances, that it was something I should do.” For the first time, then, Lilia is motivated not what by the adults in her life have “taught” her, but by “circumstance.” Lilia has shed her former innocence and wants to take action and have an impact in any way she can. Later, when Mr. Pirzada frets about Lilia’s safety before she goes trick-or-treating, Lilia tells him “don’t worry”—words she “had tried but failed to tell him for weeks.” Where once she took Mr. Pirzada’s candies and let him baby her, now Lilia begins to feel that she wants to take care of him and comfort him—even though he is an adult and she is only 10 years old. Finally, after Mr. Pirzada returns to the newly independent Bangladesh the end of the story, Lilia learns “what it mean[s] to miss someone who [is] so many miles and hours away.” Now that she has lived through both this conflict and Mr. Pirzada’s departure, Lilia has a more mature understanding not only of current events but of human relationships. Interestingly, she compares her loss of Mr. Pirzada to Mr. Pirzada’s loss of his daughters—again suggesting that she saw herself as having adult responsibility in her relationship with Mr. Pirzada. For Lilia, then, coming of age means not only a newfound knowledge of the world but also a newfound responsibility to the people in it.

Youth and Innocence vs. Maturity and Responsibility ThemeTracker 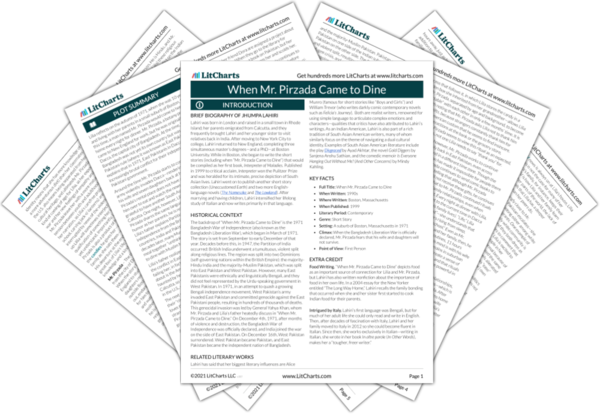 Youth and Innocence vs. Maturity and Responsibility Quotes in When Mr. Pirzada Came to Dine 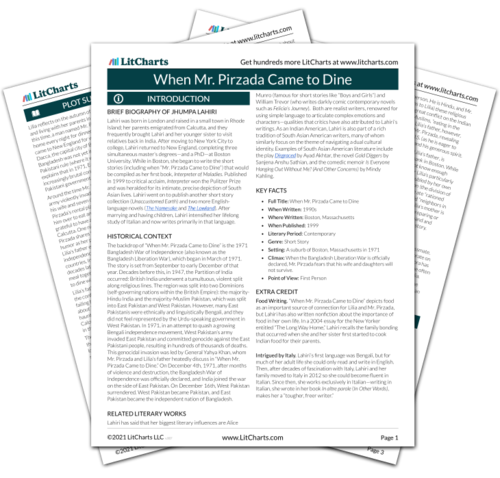 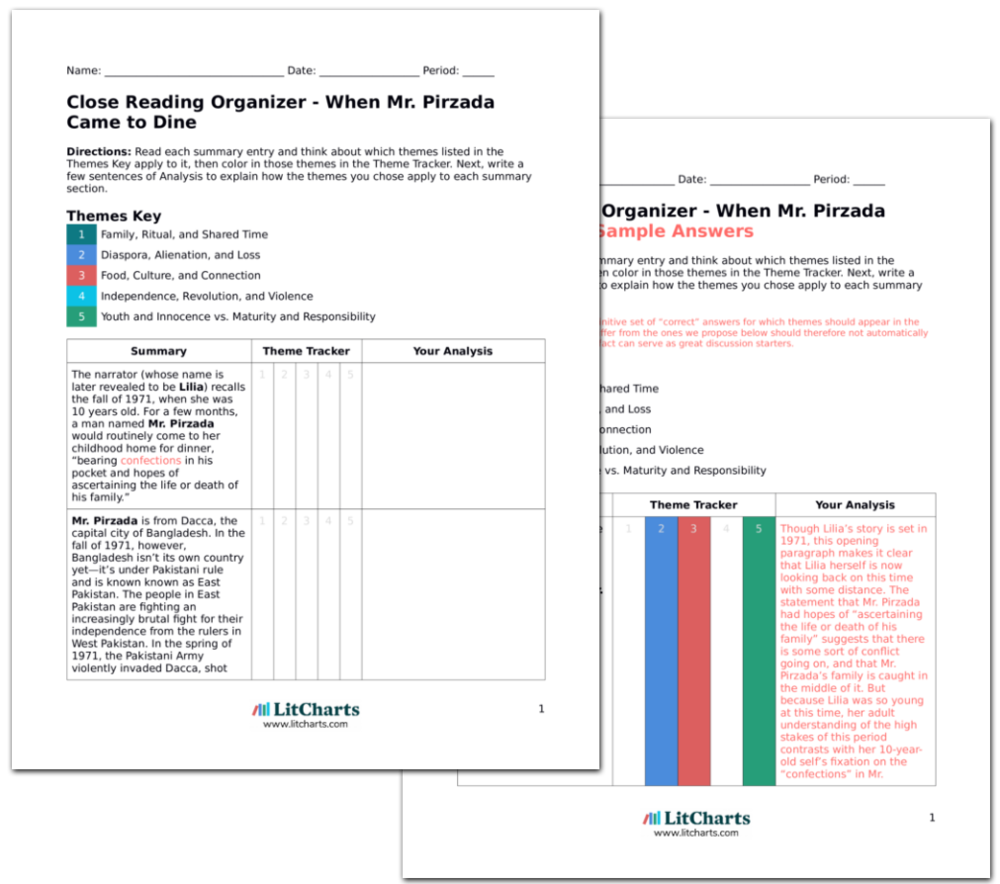