Download this LitChart! (PDF)
Teachers and parents! Struggling with distance learning? Our Teacher Edition on Whirlpool can help.

Welcome to the LitCharts study guide on Cate Kennedy's Whirlpool. Created by the original team behind SparkNotes, LitCharts are the world's best literature guides.

A concise biography of Cate Kennedy plus historical and literary context for Whirlpool.

A quick-reference summary: Whirlpool on a single page.

In-depth summary and analysis of every of Whirlpool. Visual theme-tracking, too.

Explanations of Whirlpool's symbols, and tracking of where they appear.

An interactive data visualization of Whirlpool's plot and themes.

Kennedy was born in the United Kingdom and spent her childhood traveling between various Australian states and the U.K., due to her father being in the Air Force. After studying at the Canberra College of Advanced Education (which later became the University of Canberra) and the Australian National University, she worked as a freelance writer, teacher, and community arts worker. In the 1990s, she spent two years as a volunteer teaching reading and writing in Central Mexico. This experience partially inspired 2001’s Signs of Other Fires, her first poetry collection. She has since published several other volumes of poetry, one novel, and two short story collections, Dark Roots and Like a House on Fire. Many of her stories were first published individually in magazines and newspapers. All of her short story and poetry collections have won numerous awards and been nominated for many more. Kennedy lives in Victoria, Australia.
Get the entire Whirlpool LitChart as a printable PDF.
"My students can't get enough of your charts and their results have gone through the roof." -Graham S.
Download 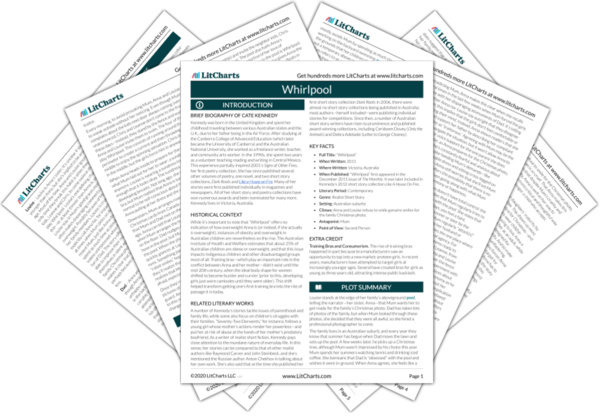 While it’s important to note that “Whirlpool” offers no indication of how overweight Anna is (or indeed, if she actually is overweight), instances of obesity and overweight in Australian children are nevertheless on the rise. The Australian Institute of Health and Welfare estimates that about 25% of Australian children are obese or overweight, and that this issue impacts Indigenous children and other disadvantaged groups most of all. Training bras—which play an important role in the conflict between Anna and her mother—didn’t exist until the mid-20th century, when the ideal body shape for women shifted to become bustier and curvier (prior to this, developing girls just wore camisoles until they were older). This shift helped transform getting one’s first training bra into the rite of passage it is today.

Other Books Related to Whirlpool

A number of Kennedy’s stories tackle issues of parenthood and family life, while some also focus on children’s struggles with their families. “Seventy-Two Derwents,” for instance, follows a young girl whose mother’s actions render her powerless—and put her at risk of abuse at the hands of her mother’s predatory boyfriend. As a writer of realist short fiction, Kennedy pays close attention to the mundane nature of everyday life. In this sense, her stories can be compared to that of other realist authors like Raymond Carver and John Steinbeck, and she’s mentioned the Russian author Anton Chekhov in talking about her own work. She’s also said that at the time she published her first short story collection Dark Roots in 2006, there were almost no short story collections being published in Australia; most authors—herself included—were publishing individual stories for competitions. Since then, a number of Australian short story writers have risen to prominence and published award-winning collections, including Ceridwen Dovey (Only the Animals) and Debra Adelaide (Letter to George Clooney).
Key Facts about Whirlpool

Training Bras and Consumerism. The rise of training bras happened in part because bra manufacturers saw an opportunity to tap into a new market: preteen girls. In recent years, manufacturers have attempted to target girls at increasingly younger ages. Several have created bras for girls as young as three years old, attracting intense public backlash. 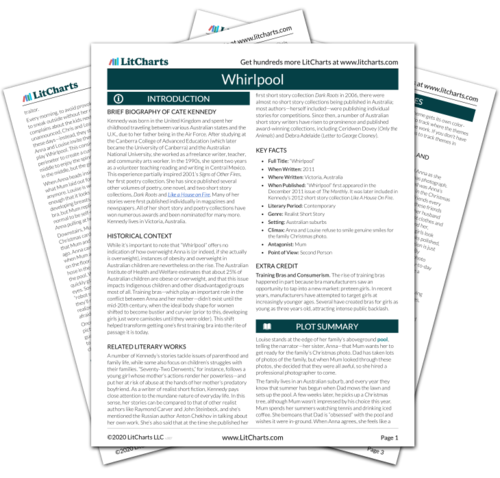 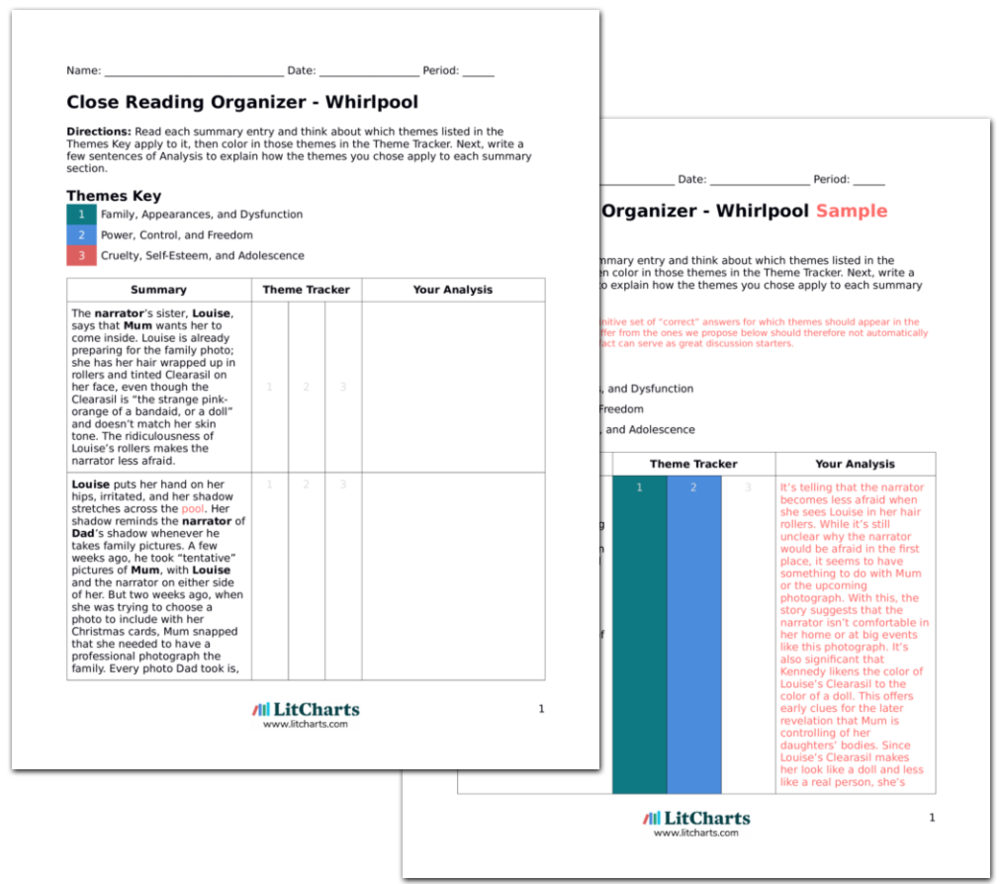