Download this LitChart! (PDF)
Teachers and parents! Struggling with distance learning? Our Teacher Edition on White Spirit can help.

Welcome to the LitCharts study guide on Cate Kennedy's White Spirit. Created by the original team behind SparkNotes, LitCharts are the world's best literature guides.

A concise biography of Cate Kennedy plus historical and literary context for White Spirit.

A quick-reference summary: White Spirit on a single page.

In-depth summary and analysis of every of White Spirit. Visual theme-tracking, too.

Explanations of White Spirit's symbols, and tracking of where they appear.

An interactive data visualization of White Spirit's plot and themes.

Cate Kennedy was born in the town of Louth in the county of Lincolnshire, England in 1963. As a child, her family moved to Australia, where she still lives today. Throughout her childhood, her family travelled to and lived in many different places within both Australia and the United Kingdom. She studied literature at Canberra College of Advanced Education and the Australian National University, and then worked several jobs before becoming a successful fiction writer, including working as a community arts worker in rural Victoria. For two years she also lived in Central Mexico, where she worked as a volunteer and taught literacy to illiterate communities. Her writing is often inspired by her political observations of society’s weaknesses and the struggles faced by low-income or impoverished communities, largely based on experiences she has had working adjacent to these communities. “Habit,” her award-winning short story was inspired by flaws and dangers she saw in the Australian Customs Service, which she also briefly worked for. She is primarily a short-story writer, and has had two short story collections published: Dark Roots (2006) Like a House on Fire (2012). She has also written poetry and nonfiction, and her sole novel, The World Beneath (2019) was shortlisted for and won several awards. She currently lives on a farm in Victoria, Australia and teaches at several colleges in addition to writing.
Get the entire White Spirit LitChart as a printable PDF.
"My students can't get enough of your charts and their results have gone through the roof." -Graham S.
Download 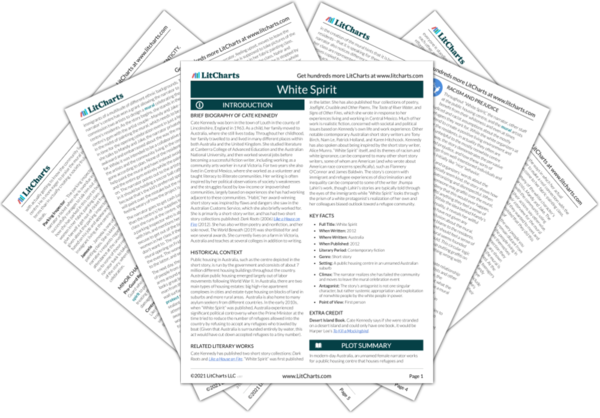 Public housing in Australia, such as the centre depicted in the short story, is run by the government and consists of about 7 million different housing buildings throughout the country. Australian public housing emerged largely out of labor movements following World War II. In Australia, there are two main types of housing estates: big high-rise apartment complexes in cities and estate-type housing on blocks of land in suburbs and more rural areas.  Australia is also home to many asylum seekers from different countries. In the early 2010s, when “White Spirit” was published, Australia experienced significant political controversy when the Prime Minister at the time tried to reduce the number of refugees allowed into the country by refusing to accept any refugees who traveled by boat (Given that Australia is surrounded entirely by water, this act would have cut down accepted refugees to a tiny number).

Other Books Related to White Spirit

Cate Kennedy has published two short story collections: Dark Roots and Like a House on Fire. “White Spirit” was first published in the latter. She has also published four collections of poetry, Joyflight, Crucible and Other Poems, The Taste of River Water, and Signs of Other Fires, which she wrote in response to her experiences living and working in Central Mexico. Much of her work is realistic fiction, concerned with societal and political issues based on Kennedy’s own life and work experience. Other notable contemporary Australian short story writers are Tony Birch, Nam Le, Patrick Holland, and Karen Hitchcock. Kennedy has also spoken about being inspired by the short story writer, Alice Munro. “White Spirit” itself, and its themes of racism and white ignorance, can be compared to many other short story writers, some of whom are American (and who wrote about American race concerns specifically), such as Flannery O’Connor and James Baldwin. The story’s concern with immigrant and refugee experiences of discrimination and inequality can be compared to some of the writer Jhumpa Lahiri’s work, though Lahiri’s stories are typically told through the eyes of the immigrants while “White Spirit” looks through the prism of a white protagonist’s realization of her own and her colleagues biased outlook toward a refugee community.
Key Facts about White Spirit

Desert Island Book. Cate Kennedy says if she were stranded on a desert island and could only have one book, it would be Harper Lee’s To Kill a Mockingbird. 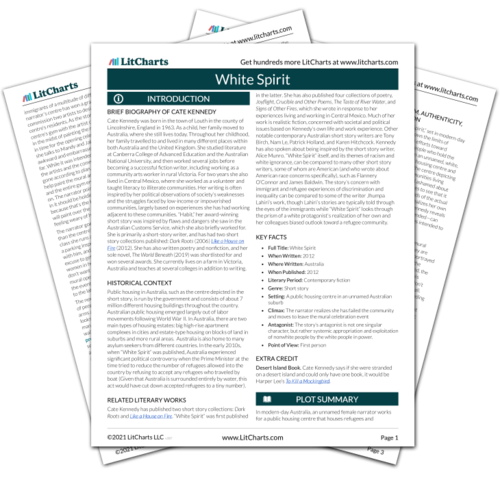 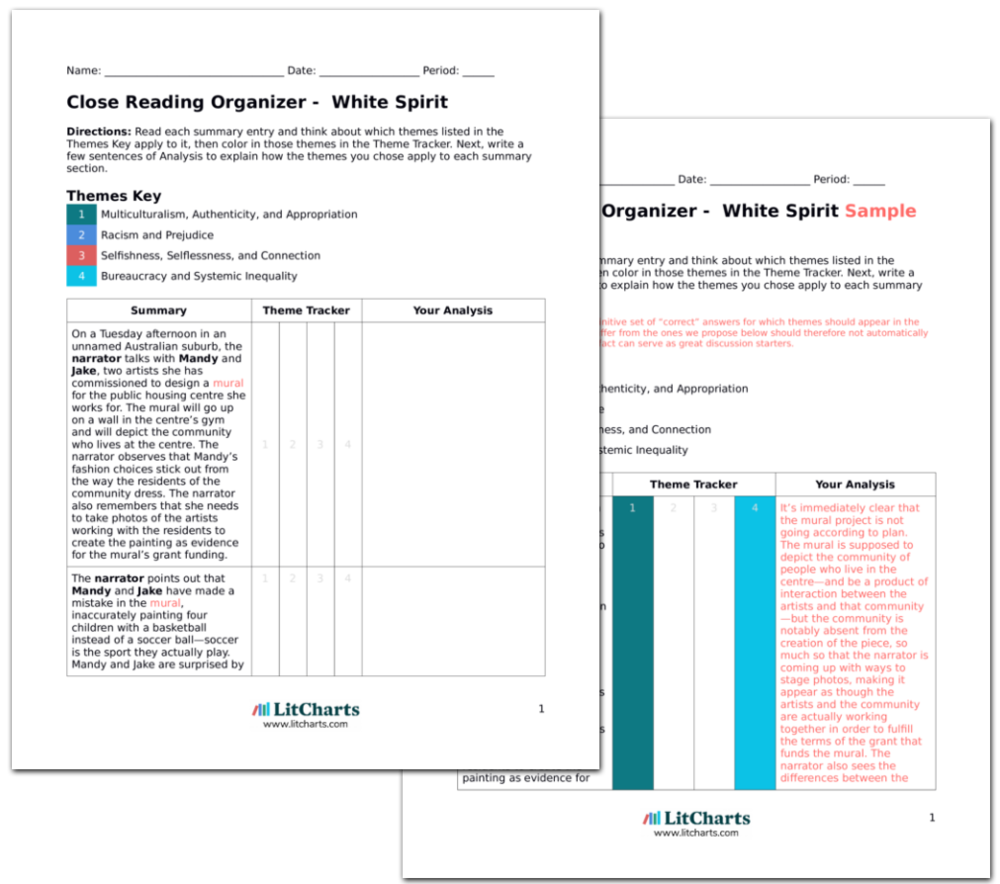