Download this LitChart! (PDF)
Teachers and parents! Struggling with distance learning? Our Teacher Edition on Why Be Happy? can help.

Get LitCharts A+
LitCharts assigns a color and icon to each theme in Why Be Happy When You Could Be Normal?, which you can use to track the themes throughout the work.

At the heart of the narrative of Why Be Happy are the intense and complex roles that mothers play in the lives of their daughters. Though Jeanette is at best full of pity and at worst full of hate for her abusive adoptive mother, Mrs. Winterson, she still feels a possessiveness over her: “She was a monster but she was my monster,” Jeanette writes toward the end of the book, invoking their shared obsession with (and revulsion for) one another, and the grievous effects that obsession and revulsion had on each of them. As the adult Jeanette seeks out and connects with her birth mother, Ann S. she realizes that Ann is “someone [she doesn’t] know at all”—someone who threw Jeanette from the “wreckage” of her own life without fully considering where Jeanette might land. Questions of love and hatred as well as abandonment and acceptance swirl around the mother-daughter relationships between Jeanette and her two mothers—in the end, Jeanette decides that forgiveness is the only thing that “redeems and unblocks” both the past and the future, and continues on her journey to forgive both of her mothers for the very different kinds of pain they inflicted on her.

The effects of all the pain Jeanette inherited from each of her mothers disrupted Jeanette’s ability to love as an adult. Jeanette feared both that she would always be abandoned—an effect of Ann’s having given her up—and that she would never be able to “make a home” with someone she loved—an effect of Mrs. Winterson’s having made Jeanette’s childhood home into an unsafe space on the days she was allowed in, and an impenetrable fortress on the days (and long nights) she was locked out in the street or the coal-hole. The journey of Why Be Happy is, in large part, Jeanette’s journey toward learning how to “love well”—a journey which requires her to meditate deeply on both the possibilities and deficiencies of love, and to work through her past. Jeanette engages “creature” inside of herself—her younger self, a terrifying and terrified entity which has lurked inside Jeanette for years—in order to move closer to, understand, and overcome the traumas inflicted on her by Mrs. Winterson. Shortly after this journey of recovery, Jeanette begins tracking down her birth mother Ann, a process which again allows her to move closer to, understand, and then overcome and distance herself from Ann’s own decisions.

Jeanette, in the end, is able to come to terms with Ann’s decision to give her up for adoption, and, to a lesser but still meaningful degree, with Mrs. Winterson’s cruelty. Ann’s seemingly-reckless decision to hurl Jeanette from the “wreckage” is transformed from a choice that once seemed cruel into a choice that indicates care and love—though Jeanette remains to some degree “furious,” she is “glad” that Ann made the choice she made. Mrs. Winterson’s abuses and abominable actions are less easily forgiven, but Jeanette’s admission that even if Mrs. Winterson was a monster, she was “my monster” reveals an admission that the “dark gifts” Mrs. Winterson gave her made her into who she is.

The ThemeTracker below shows where, and to what degree, the theme of Mothers, Daughters, and Forgiveness appears in each chapter of Why Be Happy When You Could Be Normal?. Click or tap on any chapter to read its Summary & Analysis.
How often theme appears:
chapter length:
Chapter
Chapter 1
1
Chapter 2
2
Chapter 3
3
Chapter 4
4
Chapter 5
5
Chapter 6
6
Chapter 7
7
Chapter 8
8
Chapter 9
9
Chapter 10
10
Chapter 11
11
Intermission
Int
Chapter 12
12
Chapter 13
13
Chapter 14
14
Chapter 15
15
Coda
Coda
Get the entire Why Be Happy? LitChart as a printable PDF.
"My students can't get enough of your charts and their results have gone through the roof." -Graham S.
Download 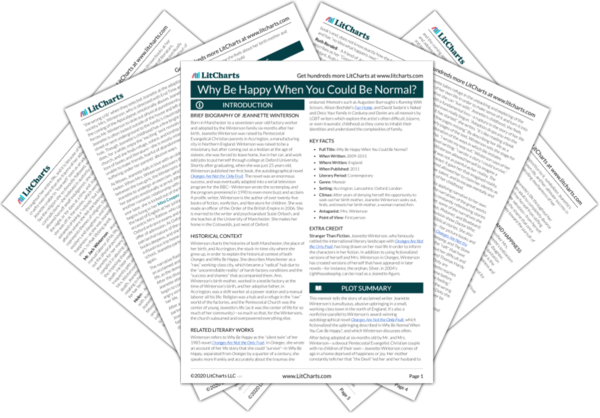 Mothers, Daughters, and Forgiveness Quotes in Why Be Happy When You Could Be Normal?

Below you will find the important quotes in Why Be Happy When You Could Be Normal? related to the theme of Mothers, Daughters, and Forgiveness.
Chapter 1 Quotes

When my mother was angry with me, which was often, she said, “The Devil led us to the wrong crib.”

Adopted children are self-invented because we have to be; there is an absence, a void, a question mark at the very beginning of our lives. A crucial part of our story is gone, and violently, like a bomb in the womb. The feeling that something is missing never, ever leaves you—and it can’t and it shouldn’t, because something is missing.

We were matched in our lost and losing. I had lost the warm safe place, however chaotic, of the first person I loved. I had lost my name and my identity. Adopted children are dislodged. My mother felt that the whole of life was a grand dislodgement. We both wanted to go Home.

When love is unreliable and you are a child, you assume that it is the nature of love—its quality—to be unreliable. Children do not find fault with their parents until later. In the beginning the love you get is the love that sets.

I don’t know why [Mrs. Winterson] hated Accrington as much as she did but she did, and yet she didn’t leave. When I left it was though I had relieved her and betrayed her all at once. She longed for me to be free and did everything she could to make sure it never happened.

I think Mrs. Winterson was afraid of happiness. Jesus was supposed to make you happy but he didn’t, and if you were waiting for the Apocalypse that never came, you were bound to feel disappointed. She thought that happy meant bad/wrong/sinful. Or plain stupid. Unhappy seemed to have virtue attached to it.

We were not allowed books but we lived in a world of print. Mrs. Winterson wrote out exhortations and stuck them all over the house Under my coat peg a sign said THINK OF GOD NOT THE DOG. Over the gas oven, on a loaf wrapper, it said MAN SHALL NOT LIVE BY BREAD ALONE. Those who sat down [on the toilet] read HE SHALL MELT THY BOWELS LIKE WAX. When I went to school my mother put quotes from the Scriptures in my hockey boots. Cheery or depressing, it was all reading and reading was what I wanted to do. Fed words and shot with them, words became clues. Piece by piece I knew they would lead me somewhere else.

Were we endlessly ransacking the house, the two of us, looking for evidence of each other? I think we were—she, because I was fatally unknown to her, and she was afraid of me. Me, because I had no idea what was missing but felt the missing-ness of the missing. We circled each other, wary, abandoned, full of longing. We came close but not close enough and then we pushed each other away forever.

What would it have meant to be happy? What would it have meant if things had been bright, clear, good between us? It was never a question of biology or nature and nurture. I know now that we heal up through being loved, and through loving others. We don’t heal by forming a secret society of one—by obsessing about the only other “one” we might admit, and being doomed to disappointment. It was a compulsive doctrine, and I carried it forward in my own life for a long time. It is of course the basis of romantic love—you + me against the world. A world where there are only two of us. A world that doesn’t really exist, except that we are in it. And one of us will always fail the other.

Mother is our first love affair. And if we hate her, we take that rage with us into other lovers. And if we lose her, where do we find her again?

A few months later [the creature and I] were having our afternoon walk when I said something about how nobody had cuddled us when we were little. I said “us,” not “you.” She held my hand. She had never done that before; mainly she walked behind shooting her sentences. We both sat down and cried. I said: “We will learn how to love.”

Happy endings are only a pause. There are three kids of big endings: Revenge. Tragedy. Forgiveness. Revenge and Tragedy often happen together. Forgiveness redeems the past. Forgiveness unblocks the future.

Unlock with LitCharts A+
Coda Quotes

I am interested in nature/nurture. I notice that I hate Ann criticizing Mrs. Winterson. She was a monster but she was my monster. 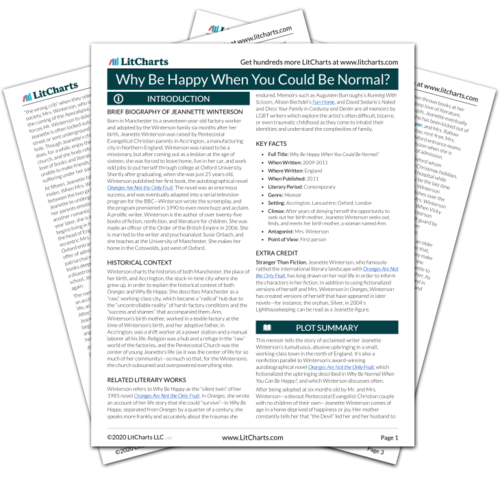 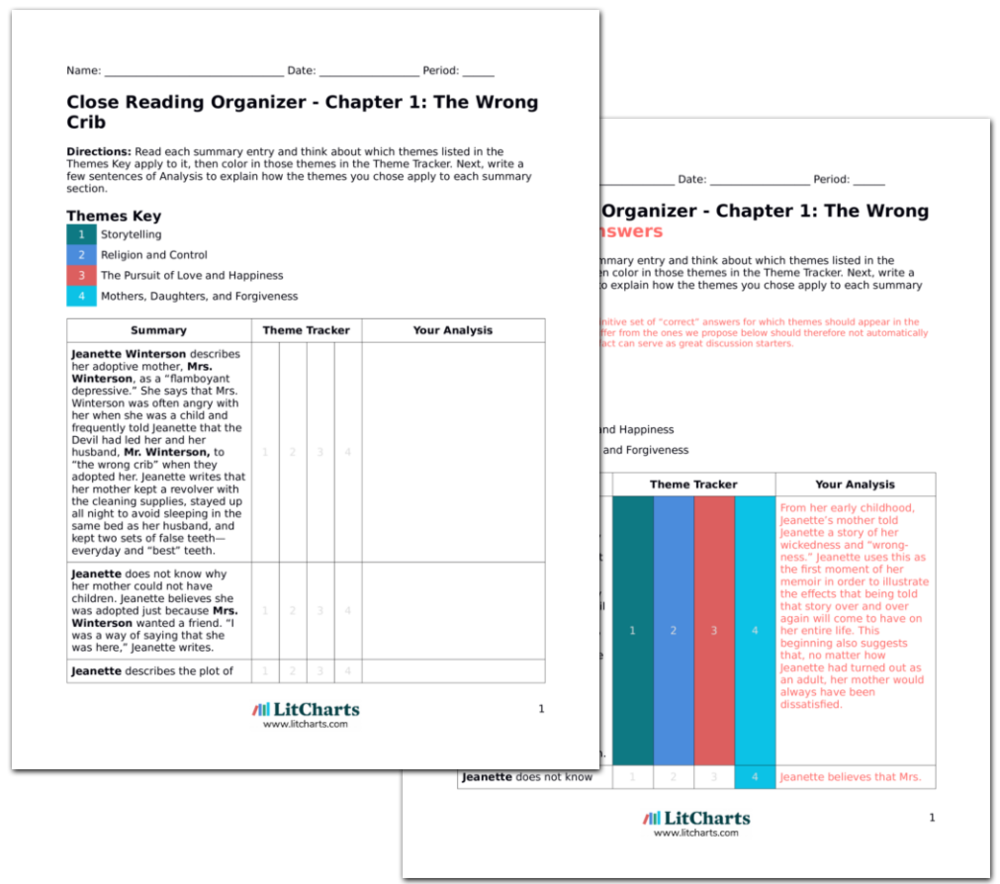