Download this LitChart! (PDF)
Teachers and parents! Struggling with distance learning? Our Teacher Edition on Wild can help.

Welcome to the LitCharts study guide on Cheryl Strayed's Wild. Created by the original team behind SparkNotes, LitCharts are the world's best literature guides.

A concise biography of Cheryl Strayed plus historical and literary context for Wild.

A quick-reference summary: Wild on a single page.

In-depth summary and analysis of every chapter of Wild. Visual theme-tracking, too.

Explanations of Wild's symbols, and tracking of where they appear.

An interactive data visualization of Wild's plot and themes.

Born in Pennsylvania and raised largely in a house without plumbing or electricity in rural Minnesota, Cheryl Strayed’s love of nature and desire to conquer the wilderness dates back to her childhood and teen years. When her mother Bobbi died in 1991, during the 22-year-old Cheryl’s senior year of college, Cheryl’s life suffered a major blow. Her marriage dissolved as a result of her serial cheating and burgeoning addiction to heroin, leading her to adopt the surname “Strayed” as a reflection of her wandering from the once-traditional path of her life. Desperate to save herself, confront her shortcomings, and find a route to healing, Cheryl embarked on an 1,100-mile hike along the Pacific Crest Trail, a journey that would become the basis for her critically-acclaimed 2012 memoir Wild. After hiking the PCT, Cheryl settled in Portland, Oregon, where she has lived ever since. The author of the novel Torch and the once-anonymous voice behind the popular Dear Sugar advice column, Cheryl Strayed is an inquisitive and empathetic writer and one of the literary community’s most steadfast members. Her collected advice letters, Tiny Beautiful Things, was adapted for the stage in 2016, and her memoir Wild is now a major motion picture directed by Jean-Mark Vallée and starring Reese Witherspoon.
Get the entire Wild LitChart as a printable PDF.
"My students can't get enough of your charts and their results have gone through the roof." -Graham S.
Download 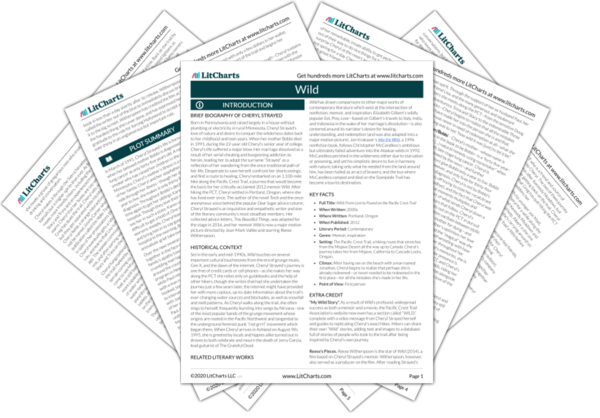 Set in the early and mid-1990s, Wild touches on several important cultural touchstones from the era of grunge music, Gen X, and the dawn of the internet. Cheryl Strayed’s journey is one free of credit cards or cell phones—as she makes her way along the PCT she relies only on guidebooks and the help of other hikers, though she writes that had she undertaken the journey just a few years later, the internet might have provided her with more copious, up-to-date information about the trail’s ever-changing water sources and blockades, as well as snowfall and melt patterns. As Cheryl walks along the trail, she often sings to herself, frequently bursting into songs by Nirvana—one of the most popular bands of the grunge movement whose origins are rooted in the Pacific Northwest and tangential to the underground feminist punk “riot grrrl” movement which began there. When Cheryl arrives in Ashland on August 9th, 1995, she is greeted by locals and hippies alike turned out in droves to both celebrate and mourn the death of Jerry Garcia, lead guitarist of The Grateful Dead.

Other Books Related to Wild

Wild has drawn comparisons to other major works of contemporary literature which exist at the intersection of nonfiction, memoir, and inspiration. Elizabeth Gilbert’s wildly popular Eat, Pray, Love—based on Gilbert’s travels to Italy, India, and Indonesia in the wake of her marriage’s dissolution—is also centered around its narrator’s desire for healing, understanding, and redemption (and was also adapted into a major motion picture). Jon Krakauer’s Into the Wild, a 1996 nonfiction book, follows Christopher McCandless’s ambitious but ultimately failed adventure into the Alaskan wilds in 1992. McCandless perished in the wilderness either due to starvation or poisoning, and yet his simplistic desire to live in harmony with nature, taking only what he needed from the land around him, has been hailed as an act of bravery, and the bus where McCandless camped and died on the Stampede Trail has become a tourist destination.
Key Facts about Wild

“My Wild Story”. As a result of Wild’s profound, widespread success as both a memoir and a movie, the Pacific Crest Trail Association’s website now even has a section called “WILD,” complete with a video message from Cheryl Strayed herself and guides to replicating Cheryl’s exact hikes. Hikers can share their own “Wild” stories, adding text and images to a database full of stories of people who took to the trail after being inspired by Cheryl’s own journey.

Reese’s Pieces. Reese Witherspoon is the star of Wild (2014), a film based on Cheryl Strayed’s memoir. Witherspoon, however, also served as a producer on the film. After reading Strayed’s book in less than a day shortly after its release, Witherspoon called the writer out of the blue to immediately discuss bringing it to the big screen. Witherspoon has credited the film as being the hardest thing she’s ever done, and has expressed her gratitude to the role for forcing Hollywood to accept a woman over thirty in an unglamorous but important role. 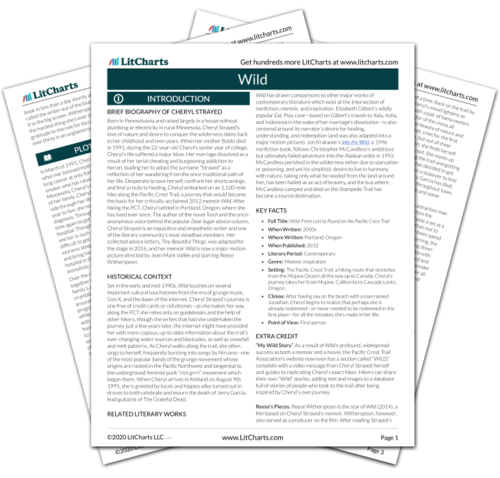 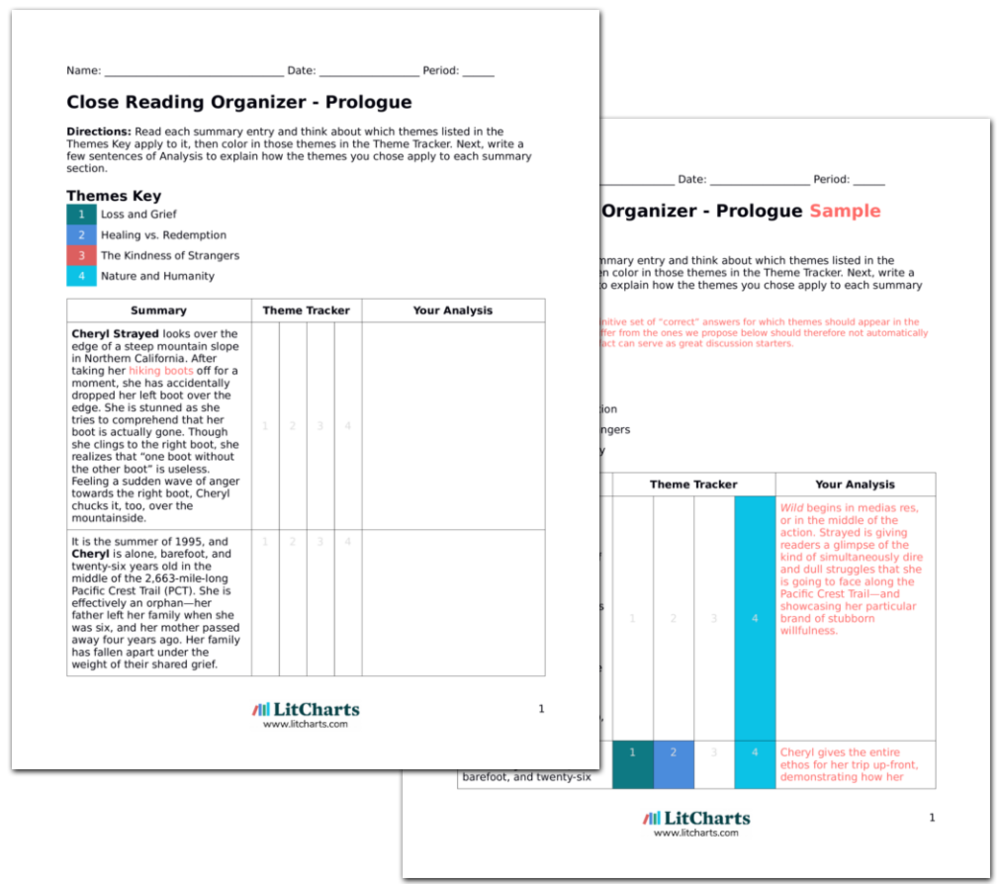