Zen and the Art of Motorcycle Maintenance interweaves two parallel plots: the first is the chronicling of a transcontinental motorcycle journey taken by the narrator and his eleven-year-old son, Chris. The second plot details the life and thought of a man named Phaedrus, a solitary intellectual obsessed with a philosophical concept called Quality. At the beginning of the story, the narrator and Chris leave Minneapolis on a motorcycle trip with their friends, John and Sylvia Sutherland. As the group travels, the narrator intersperses accounts of the trip with philosophical discourses that he calls Chautauquas.

The narrator’s first Chautauqua discusses John and Sylvia’s aversion to technology, which he aligns with a “romantic” approach to life—one that values surface impressions over rational analysis. The narrator’s own outlook is a more analytical one that he terms “classic.” As the party travels along, the narrator has uncanny recognitions of the terrain they pass, and repeatedly refers to “ghosts” in his thoughts. Shortly thereafter, the narrator explains these strange mental episodes by revealing that Phaedrus suffered a nervous breakdown and was subjected to electroshock therapy, and the new consciousness that appeared in his brain is that of the narrator. In other words, Phaedrus and the narrator are the past and present identities of the same individual, and the uncanny recollections the narrator has are “fragments” of memory left over from Phaedrus’s life.

As the travelers move through Montana, the narrator gives a history of Phaedrus’s life. Phaedrus was a scientific prodigy, but dropped out of school after he lost faith in scientific reason’s ability to explain the world. Phaedrus explored other kinds of truth for several years, and eventually got a job teaching English at Montana State University in Bozeman, Montana, which is the travelers’ destination. In Bozeman, the travelers stay with Robert and Gennie DeWeese, friends of Phaedrus’s.

The narrator and Chris leave to hike a mountain. On this trip, the narrator describes Phaedrus’s attempts to pin down the concept of Quality: that which makes something good. Torn between whether Quality is a subjective or objective phenomenon, Phaedrus eventually comes to the epiphany that it is in fact neither. Quality precedes subjectivity and objectivity—in fact, it is what allows for the separation of the world into subjective and objective realms in the first place. During the hike, Chris complains and misbehaves. When he and his son are camped out on the mountain, the narrator has a disturbing nightmare about a glass door that separates him from his family. Worried that something bad will happen if they reach the summit of the mountain, the narrator cuts the hike short and the two head back to Bozeman.

Back on the road and heading west, the narrator begins a series of Chautauquas that illustrate how Quality can manifest itself in the proper practice of motorcycle maintenance. He elaborates several phenomena, such as the “stuckness” that can foster innovative insights, the “gumption” that fuels sustained work of Quality, and the “gumption traps” that can prevent an individual from developing an awareness of and sensitivity to Quality. Rigid, dualistic thinking is a chief obstacle to an attunement with Quality.

The narrator’s glass door dream recurs, and the narrator realizes that it signifies his divided identity and struggle with Phaedrus. The narrator recalls spending time with Chris as Phaedrus and concludes that he will have to explain his mental state to his son. The narrator describes Phaedrus’s enrollment in an interdisciplinary program at the University of Chicago and his obsessive study of Ancient Greek philosophy. There, Phaedrus has an intellectual faceoff against the Chairman of his interdisciplinary committee, whose Aristotelian ideas run counter to Phaedrus’s philosophy of Quality. Following this confrontation, Phaedrus becomes completely insane, and is hospitalized and administered electroshock therapy.

As the narrator and Chris travel towards San Francisco, their relationship wears thin. The narrator plans to send Chris home and then to check himself into a hospital. He explains his mental instability to Chris and warns his son that he may suffer the same illness. This distresses Chris profoundly. Chris asks why the narrator did not open the glass door that separated them at the hospital, and the narrator explains that he was not permitted to. This spurs the mutual realization that Phaedrus was not, in fact, insane. The narrator begins to reconcile his once-divided identity, and he and his son ride towards San Francisco in high spirits. 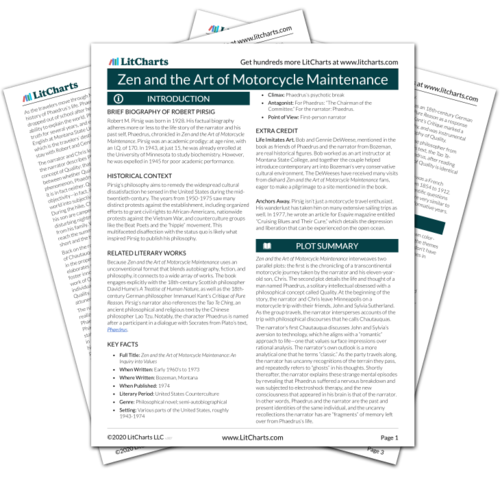 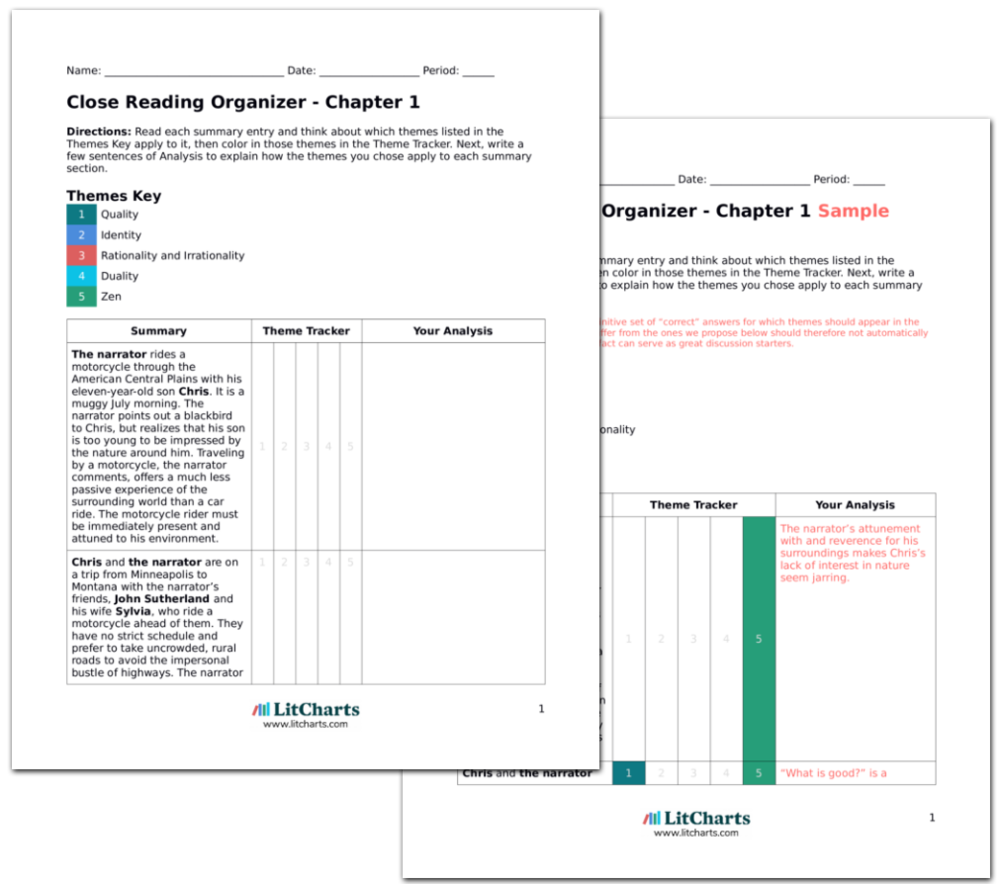