Download this LitChart! (PDF)
Teachers and parents! Struggling with distance learning? Our Teacher Edition on Zoot Suit can help.

Welcome to the LitCharts study guide on Luis Valdez's Zoot Suit. Created by the original team behind SparkNotes, LitCharts are the world's best literature guides.

A concise biography of Luis Valdez plus historical and literary context for Zoot Suit.

A quick-reference summary: Zoot Suit on a single page.

In-depth summary and analysis of every scene of Zoot Suit. Visual theme-tracking, too.

Explanations of Zoot Suit's symbols, and tracking of where they appear.

An interactive data visualization of Zoot Suit's plot and themes.

Luis Valdez was born in Delano, California to migrant farmers. The second of 10 children, he rarely stayed in one place long enough to become acquainted with a specific school system, since his family constantly moved to follow the best seasonal crops. All the same, Valdez was a good student and even appeared rather frequently on a local television show when he was a teenager in high school. He then attended San Jose State College and focused more seriously on theater, producing his first play, The Shrunken Head of Pancho, when he was a senior. After graduating, Valdez spent some time in the San Francisco Mime Troupe, and then he founded his own theater company, El Teatro Campesino. The company was made up of farmers, and Valdez served as its artistic director, primarily putting on short political plays about the importance of farmers’ unions. El Teatro Campesino quickly became popular, but Valdez decided to leave the company in 1967, at which point he founded a Chicano cultural center in Del Rey, California. He then moved to Fresno, where he reestablished the cultural center while teaching at Fresno State College. Valdez also founded another theater organization called TENAZ, which he moved once again when he resettled just south of San Francisco in 1971. All the while, he wrote political plays that were comedic yet emotionally striking, including The Dark Root of a Scream in 1967, Bernabé in 1970, and Zoot Suit in 1979, to name just a few. He has since directed many films—including the well-known La Bamba in 1987—and won a number of awards. Valdez lives in San Juan Bautista, California and received the National Medal of Arts in 2015.
Get the entire Zoot Suit LitChart as a printable PDF.
"My students can't get enough of your charts and their results have gone through the roof." -Graham S.
Download 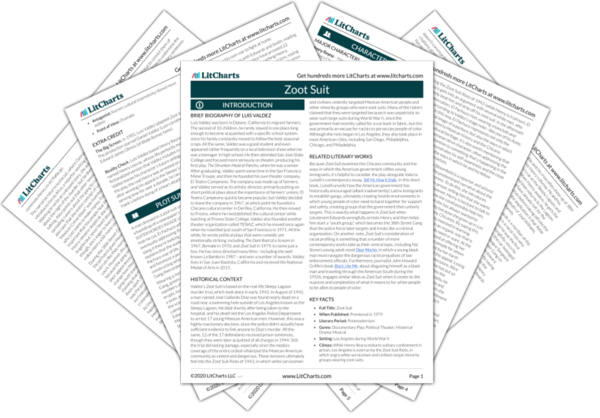 Valdez’s Zoot Suit is based on the real-life Sleepy Lagoon murder trial, which took place in early 1943. In August of 1942, a man named José Gallardo Díaz was found nearly dead on a road near a swimming hole outside of Los Angeles known as the Sleepy Lagoon. He died shortly after being taken to the hospital, and his death led the Los Angeles Police Department to arrest 17 young Mexican American men. However, this was a highly reactionary decision, since the police didn’t actually have sufficient evidence to link anyone to Díaz’s murder. All the same, 12 of the 17 defendants received prison sentences, though they were later acquitted of all charges in 1944. Still, the trial did lasting damage, especially since the media’s coverage of the entire ordeal villainized the Mexican American community as violent and dangerous. These tensions ultimately fed into the Zoot Suit Riots of 1943, in which white servicemen and civilians violently targeted Mexican American people and other minority groups who wore zoot suits. Many of the rioters claimed that they were targeted because it was unpatriotic to wear such large suits during World War II, since the government had recently called for a cut-back in fabric, but this was primarily an excuse for racists to persecute people of color. Although the riots began in Los Angeles, they also took place in most American cities, including San Diego, Philadelphia, Chicago, and Philadelphia.

Other Books Related to Zoot Suit

Because Zoot Suit examines the Chicano community and the ways in which the American government vilifies young immigrants, it’s helpful to consider the play alongside Valeria Luiselli’s contemporary essay, Tell Me How It Ends. In this short book, Luiselli unveils how the American government has historically encouraged (albeit inadvertently) Latinx immigrants to establish gangs, ultimately creating hostile environments in which young people of color need to band together for support and safety, creating groups that the government then unfairly targets. This is exactly what happens in Zoot Suit when Lieutenant Edwards wrongfully arrests Henry and then helps him start a “youth group,” which becomes the 38th Street Gang that the police force later targets and treats like a criminal organization. On another note, Zoot Suit’s consideration of racial profiling is something that a number of more contemporary works take as their central topic, including Nic Stone’s young adult novel Dear Martin, in which a young black man must navigate the dangerous racist prejudices of law enforcement officials. Furthermore, journalist John Howard Griffin’s book Black Like Me, about disguising himself as a black man and traveling through the American South during the 1950s, engages similar ideas as Zoot Suit when it comes to the nuances and complexities of what it means to for white people to be allies to people of color.
Key Facts about Zoot Suit

Reality Check. Luis Valdez based Henry Reyna on a real man named Henry Leyvas, whose life perfectly matches the fictionalized version that Valdez includes in Zoot Suit. Although Valdez leaves his character’s future ambiguous at the end of the play, the real Henry was arrested on drug charges not long after winning his appeal in the Sleepy Lagoon trial. After serving time for over a decade, he ran a restaurant called Hank’s before dying of a heart attack in 1971. 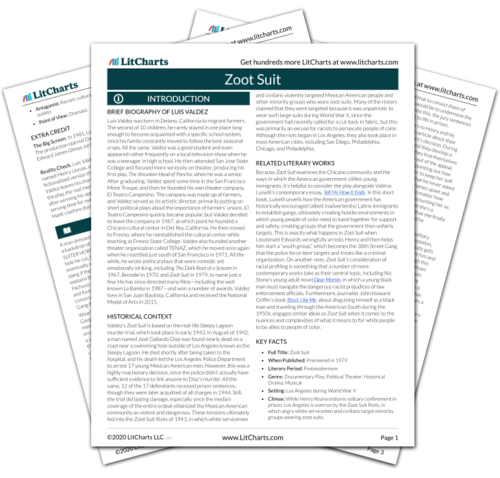 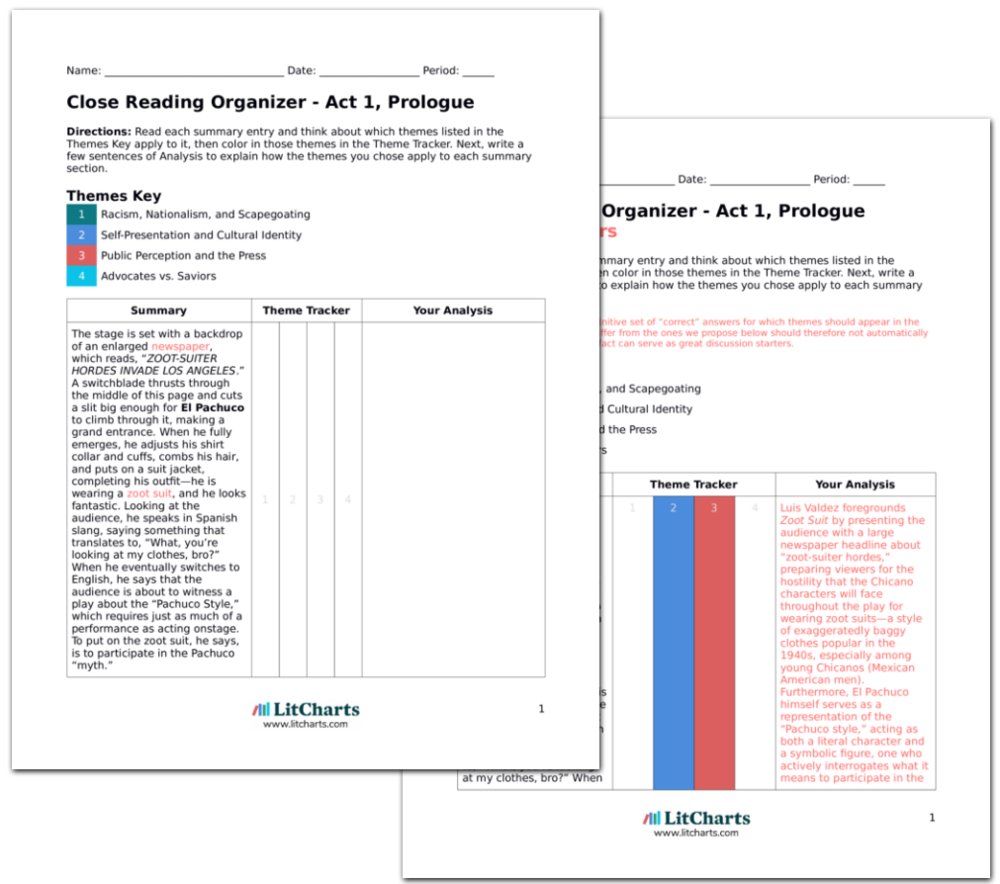