What is antithesis? Here’s a quick and simple definition:

Antithesis is a figure of speech that juxtaposes two contrasting or opposing ideas, usually within parallel grammatical structures. For instance, Neil Armstrong used antithesis when he stepped onto the surface of the moon in 1969 and said, "That's one small step for a man, one giant leap for mankind." This is an example of antithesis because the two halves of the sentence mirror each other in grammatical structure, while together the two halves emphasize the incredible contrast between the individual experience of taking an ordinary step, and the extraordinary progress that Armstrong's step symbolized for the human race.

Some additional key details about antithesis:

How to Pronounce Antithesis

Here's how to pronounce antithesis: an-tith-uh-sis

Often, but not always, antithesis works in tandem with parallelism. In parallelism, two components of a sentence (or pair of sentences) mirror one another by repeating grammatical elements. The following is a good example of both antithesis and parallelism:

To err is human, to forgive divine.

The two clauses of the sentence are parallel because each starts off with an infinitive verb and ends with an adjective ("human" and "divine"). The mirroring of these elements then works to emphasize the contrast in their content, particularly in the very strong opposite contrast between "human" and "divine."

In most cases, antitheses involve parallel elements of the sentence—whether a pair of nouns, verbs, adjectives, or other grammar elements. However, it is also possible to have antithesis without such clear cut parallelism. In the Temptations Song "My Girl," the singer uses antithesis when he says:

"When it's cold outside, I've got the month of May."

Here the sentence is clearly cut into two clauses on either side of the comma, and the contrasting elements are clear enough. However, strictly speaking there isn't true parallelism here because "cold outside" and "month of May" are different types of grammatical structures (an adjective phrase and a noun phrase, respectively).

Three literary terms that are often mistakenly used in the place of antithesis are juxtaposition, oxymoron, and foil. Each of these three terms does have to do with establishing a relationship of difference between two ideas or characters in a text, but beyond that there are significant differences between them.

In an oxymoron, two seemingly contradictory words are placed together because their unlikely combination reveals a deeper truth. Some examples of oxymorons include:

The focus of antithesis is opposites rather than contradictions. While the words involved in oxymorons seem like they don't belong together (until you give them deeper thought), the words or ideas of antithesis do feel like they belong together even as they contrast as opposites. Further, antitheses seldom function by placing the two words or ideas right next to one another, so antitheses are usually made up of more than two words (as in, "I'd rather be among the living than among the dead").

Some Internet sources use "antithesis" to describe an author's decision to create two characters in a story that are direct opposites of one another—for instance, the protagonist and antagonist. But the correct term for this kind of opposition is a foil: a person or thing in a work of literature that contrasts with another thing in order to call attention to its qualities. While the sentence "the hare was fast, and the tortoise was slow" is an example of antithesis, if we step back and look at the story as a whole, the better term to describe the relationship between the characters of the tortoise and the hare is "foil," as in, "The character of the hare is a foil of the tortoise."

Below are examples of antithesis from some of English literature's most acclaimed writers — and a comic book!

Antithesis in Charles Dickens' A Tale of Two Cities

In the famous opening lines of A Tale of Two Cities, Dickens sets out a flowing list of antitheses punctuated by the repetition of the word "it was" at the beginning of each clause (which is itself an example of the figure of speech anaphora). By building up this list of contrasts, Dickens sets the scene of the French Revolution that will serve as the setting of his tale by emphasizing the division and confusion of the era. The overwhelming accumulation of antitheses is also purposefully overdone; Dickens is using hyperbole to make fun of the "noisiest authorities" of the day and their exaggerated claims. The passage contains many examples of antithesis, each consisting of one pair of contrasting ideas that we've highlighted to make the structure clearer.

In this verse from Paradise Lost, Milton's anti-hero, Satan, claims he's happier as the king of Hell than he could ever have been as a servant in Heaven. He justifies his rebellion against God with this pithy phrase, and the antithesis drives home the double contrast between Hell and Heaven, and between ruling and serving.

Better to reign in Hell than serve in Heaven.

As the plot of Othello nears its climax, the antagonist of the play, Iago, pauses for a moment to acknowledge the significance of what is about to happen. Iago uses antithesis to contrast the two opposite potential outcomes of his villainous plot: either events will transpire in Iago's favor and he will come out on top, or his treachery will be discovered, ruining him.

This is the night
That either makes me or fordoes me quite.

In this passage, the simple word "either" functions as a cue for the reader to expect some form of parallelism, because the "either" signals that a contrast between two things is coming.

Shakespeare's plays are full of antithesis, and so is Hamlet's most well-known "To be or not to be" soliloquy. This excerpt of the soliloquy is a good example of an antithesis that is not limited to a single word or short phrase. The first instance of antithesis here, where Hamlet announces the guiding question ("to be or not to be") is followed by an elaboration of each idea ("to be" and "not to be") into metaphors that then form their own antithesis. Both instances of antithesis hinge on an "or" that divides the two contrasting options.

To be or not to be, that is the question:
Whether 'tis nobler in the mind to suffer
The slings and arrows of outrageous fortune
Or to take arms against a sea of troubles,
And by opposing end them...

In this excerpt from his poem "Four Quartets," T.S. Eliot uses antithesis to describe the cycle of life, which is continuously passing from beginning to end, from rise to fall, and from old to new.

In my beginning is my end. In succession
Houses rise and fall, crumble, are extended,
Are removed, destroyed, restored, or in their place
Is an open field, or a factory, or a by-pass.
Old stone to new building, old timber to new fires...

Comic book writers know the power of antithesis too! In this catchy oath, Green Lantern uses antithesis to emphasize that his mission to defeat evil will endure no matter the conditions.

In brightest day, in blackest night,
No evil shall escape my sight.
Let those who worship evil's might
Beware my power—Green lantern's light!

While most instances of antithesis are built around an "or" that signals the contrast between the two parts of the sentence, the Green Lantern oath works a bit differently. It's built around an implied "and" (to be technical, that first line of the oath is an asyndeton that replaces the "and" with a comma), because members of the Green Lantern corps are expressing their willingness to fight evil in all places, even very opposite environments.

Many well-known speeches contain examples of antithesis. Speakers use antithesis to drive home the stakes of what they are saying, sometimes by contrasting two distinct visions of the future.

Antithesis in Patrick Henry's Speech to the Second Virginia Convention, 1775

This speech by famous American patriot Patrick Henry includes one of the most memorable and oft-quoted phrases from the era of the American Revolution. Here, Henry uses antithesis to emphasize just how highly he prizes liberty, and how deadly serious he is about his fight to achieve it.

Is life so dear, or peace so sweet, as to be purchased at the price of chains and slavery? Forbid it, Almighty God! I know not what course others may take: but as for me, give me liberty or give me death.

In this speech by one of America's most well-known orators, antithesis allows Martin Luther King Jr. to highlight the contrast between two visions of the future; in the first vision, humans rise above their differences to cooperate with one another, while in the other humanity is doomed by infighting and division.

In songs, contrasting two opposite ideas using antithesis can heighten the dramatic tension of a difficult decision, or express the singer's intense emotion—but whatever the context, antithesis is a useful tool for songwriters mainly because opposites are always easy to remember, so lyrics that use antithesis tend to stick in the head.

In this song by The Clash, the speaker is caught at a crossroads between two choices, and antithesis serves as the perfect tool to express just how confused and conflicted he is. The rhetorical question—whether to stay or to go—presents two opposing options, and the contrast between his lover's mood from one day (when everything is "fine") to the next (when it's all "black") explains the difficulty of his choice.

One day it's fine and next it's black
So if you want me off your back
Well, come on and let me know
Should I stay or should I go?

In this song, the singer uses a pair of metaphors to describe the feeling of joy that his lover brings him. This joy is expressed through antithesis, since the singer uses the miserable weather of a cloudy, cold day as the setting for the sunshine-filled month of May that "his girl" makes him feel inside, emphasizing the power of his emotions by contrasting them with the bleak weather.

I've got sunshine on a cloudy day
When it's cold outside I've got the month of May
Well I guess you'd say,
What can make me feel this way?
My girl, my girl, my girl
Talkin' bout my girl.

Why Do Writers Use Antithesis?

Fundamentally, writers of all types use antithesis for its ability to create a clear contrast. This contrast can serve a number of purposes, as shown in the examples above. It can:

Whatever the case, antithesis almost always has the added benefit of making language more memorable to listeners and readers. The use of parallelism and other simple grammatical constructions like "either/or" help to establish opposition between concepts—and opposites have a way of sticking in the memory. 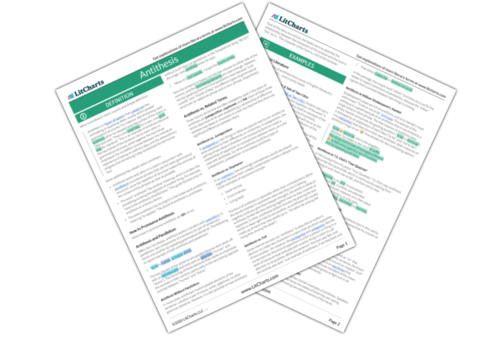