What is a cliché? Here’s a quick and simple definition:

A cliché is a phrase that, due to overuse, is seen as lacking in substance or originality. For example, telling a heartbroken friend that there are "Plenty of fish in the sea" is such a cliché that it would probably not be all that comforting for them to hear, even though the saying is meant to be a reassurance. While "cliché" is most often used to describe expressions or phrases, it can be used to label nearly anything related to literature as being boring, tired, or uncreative, including settings, character traits, actions, ideas, images, and plot events or even entire storylines.

Some additional key details about clichés:

Here's how to pronounce cliché: klee-shay

The Subjectivity of Clichés

What is and isn't a cliché is often a matter of personal opinion. After all, most things that are called clichés are used and re-used to the point of exhaustion precisely because they work so well. For instance, some might say that it's a cliché of children's movies that the protagonists have lost one or both of their parents (think of The Lion King, Finding Nemo, The Little Mermaid, Bambi, Frozen, etc.). However, others might respond that this particular plot device is not a cliché because, even after decades of use in dozens of films, it retains its power as an effective tool for winning the sympathy of the audience and forcing the main character to face the world on their own.

In addition, by calling something a cliché a person is also identifying themselves as having the taste and knowledge—as being "cool" or "stylish" enough—to know what is and isn't overused. Just because someone says something is a cliché doesn't mean you have to agree. At the same time, certain phrases or sayings (for instance: "It's not you; it's me") are recognized by nearly everyone as being clichés.

Cliché is often confused with (and in some cases related to) a number of other literary terms:

Most clichés are just regular, common clichés that involve the expression of a familiar idea in boring, familiar ways. Here are a few examples:

There are also some specific types of clichés that function in particular ways. The two most common are "thought-terminating clichés" and platitudes.

Some clichés are so simple and ubiquitous that they have the effect of cutting off or discouraging further conversation. These types of clichés are called "thought-terminating clichés." They tend to be short phrases that align with commonly-held cultural values and are difficult to refute or disprove. Here are a few examples:

Thought-terminating clichés like these can be used to shut down debate and dismiss differing opinions. A lot of people, however, simply use them out of habit.

A platitude is a meaningless statement, used to ease social tension or otherwise avoid unpleasantness. For example: saying "it is what it is" or after a difficult issue arises in no way solves the issue, but rather serves as a way to just kind of ignore it.

Clichés appear everywhere in speech and literature of all sorts. It is so prevalent that the writer Martin Amis characterizes all good writing as being a war against cliché:

The examples below show a variety of clichés of various sorts, from original turns of phrase that become clichés over time to just plain bad clichés in bad writing. Some examples also show cases of writers purposefully using clichés to fully capture their characters own clichéd thoughts and, in some cases, to show their character growing beyond uninformed and clichéd beliefs to a deeper understanding of reality.

Examples of Shakespeare Phrases that Have Become Clichés

Shakespeare is so widely read, and has been for a very long time, that some of his original turns of phrase have become so popular that they are now thought of as clichés. Here are just a few examples:

James Patterson has sold more than 230 million books. But boy can he sometimes write clichés. The follow paragraph describes the dying moments of a police officer who has been shot, along with his beloved Erdita.

He felt himself swoon and start to fade. He let go of the phone and struggled to look at Edita. She wasn’t moving, and her face looked blank and empty.

"Swoon" and "fade" as descriptors of someone losing consciousness, like "blank" and "empty" to describe the face of a dead person, are at once so bland and such common ways of describing those situations that they are pretty terrible clichés.

In his novel Ulysses, James Joyce deliberately put clichés into the mouths and thoughts of his characters to capture not only the way that they do think, but the way that they spout received wisdom and, therefore, don't think. Here's how he describes the way his protagonist Leopold Bloom thinks about music:

Mozart’s Twelfth Mass he simply revelled in, the Gloria in that being, to his mind, the acme of first class music as such, literally knocking everything else into a cocked hat.

The phrases "simply revelled in" and "acme of first class music as such" are supposed to ring hollow, to read like clichés. Note how they lack any specificity in describing the actual music, and seem to indicate no real engagement with the actual music. Joyce is capturing not just the clichéd speaking but the clichéd thinking of his character.

Purposeful Cliché in The Red Badge of Courage

In The Red Badge of Courage, Stephen Crane gives his unnamed protagonist a clichéd idea of honor, glory, and warfare, exemplified by the protoganist's desire to earn a "red badge of courage"—a wound that will prove his courage. But over the course of the novel, the protagonist experiences both the true terror of battle and the way that his superiors are willing to use him and his fellow soldiers as expendable cannon-fodder in a way that defies the possibility of any kind of honor through war. In other words, he learns that his own earlier ideals were in fact clichés—unexamined, overly-simple ideas uninformed by specific understanding.

Why Do Writers Use Clichés?

Clichés are indicators of bad writing primarily because they signal a lack of thought by the writer: a writer using clichés isn't engaged enough with his or her ideas, narrative, setting, characters, or themes to describe them clearly, specifically, honestly, or truly. A writer using clichés is not writing with intention; they are just letting words flow without subjecting them to scrutiny.

However, it is possible for a writer to intentionally use clichés. Some of the most common reasons are: 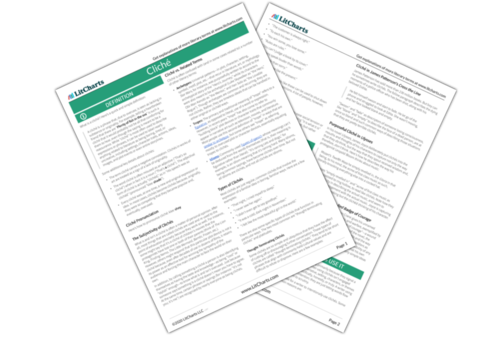