What is an elegy? Here’s a quick and simple definition:

An elegy is a poem of serious reflection, especially one mourning the loss of someone who died. Elegies are defined by their subject matter, and don't have to follow any specific form in terms of meter, rhyme, or structure.

Some additional key details about elegies:

How to Pronounce Elegy

Here's how to pronounce elegy: el-uh-jee

The Defining Features of Elegies Today

For modern and contemporary poets, the elegy is a poem that deals with the subjects of death or mortality, but has no set form, meter, or rhyme scheme. While modern elegies don't have to use any particular meter or follow a particular form, they do typically follow a specific thematic arc, moving from grief toward an acceptance of death.

Many elegies initially express grief and sorrow, which the poet works through over the course of the poem before arriving at a consolatory conclusion about the inevitable and universal nature of death. Oftentimes, the poet will find a silver lining in mourning by alluding to the Christian notion that death marks the beginning of an eternal afterlife in Heaven.

The History of Elegy

For most of history, the term "elegy" did not have any special relationship to the subject of grief or mortality. In ancient Greek and Latin verse, the elegy was a poetic form that was defined by a particular metrical pattern called "elegiac couplets"—alternating lines of dactylic hexameter (six dactyls per line) and dactylic pentameter (five dactyls per line). Some of the most famous elegies in ancient Greek and Latin verse were written by Catullus and Ovid. Below is an excerpt of one of Ovid's many "love elegies," so-called because they employ elegiac couplets. Note that, in translation, the poem loses its original meter.

Heav'n knows, dear maid, I love no other fair;
In thee lives all my love, my heav'n lies there.
Oh! may I by indulgent Fate's decree,
With thee lead all my life, and die with thee.

In English literature, elegy is not defined by its use of elegiac meter as described above. Until the 16th century, the definition of elegy in English literature remained somewhat indeterminate, and often was taken simply to mean a poem of serious reflection. During the 16th century, though, the elegy came to be more specifically defined as a poem of grief and lamentation.

In the 18th century, the elegy flourished, particularly among English Romantic poets, who valued the form for its personal and emotional qualities. So taken were the Romantics with the form that they even reinvented the traditional elegiac stanza, defining it as a quatrain (four-line stanza) in iambic pentameter (five iambs per line), following an "ABAB" rhyme scheme. Thomas Gray's famous 18th century poem, "Elegy Written in a Country Churchyard," is an example of this type of elegy—a form that, despite being defined by its elegaic stanzas, does not have its own name.

Here rests his head upon the lap of Earth
A youth to Fortune and to Fame unknown.
Fair Science frown'd not on his humble birth,
And Melancholy mark'd him for her own.

Large was his bounty, and his soul sincere,
Heav'n did a recompense as largely send:
He gave to Mis'ry all he had, a tear,
He gain'd from Heav'n ('twas all he wish'd) a friend.

Though the elegy is not a strictly-defined form, there is one particular kind of elegy whose definition is clearer: the pastoral elegy, which is typically about a deceased shepherd.

John Milton's 17th century poem "Lycidas," of which an excerpt appears below, is generally regarded as the greatest example of pastoral elegy in English literature. This passage, which comes from the end of the poem, embodies the elegiac tradition of turning to consolation after lamentation; Milton implies that the drowned Lycidas (who represents a friend of Milton's who was shipwrecked) will find new life in Heaven.

Weep no more, woeful shepherds, weep no more,
For Lycidas, your sorrow, is not dead,
Sunk though he be beneath the wat'ry floor;
So sinks the day-star in the ocean bed,
And yet anon repairs his drooping head,
And tricks his beams, and with new spangled ore
Flames in the forehead of the morning sky:
So Lycidas sunk low, but mounted high...

This is an Old English poem by an unknown author, translated here into modern English. The poem, written in the voice of a wanderer who was once a nobleman but was forced out of his homeland by war, is an elegy in the broader sense of a "serious, meditative poem" rather than a lament for the dead. It is about brokenness, loss, and the passage of time, rather than about any one person's death in particular.

The following oft-quoted stanza is from Alfred Lord Tennyson's "In Memoriam," perhaps the most famous elegy of all time. This excerpt is yet another demonstration of the tendency in elegy to seek, through the writing of the poem, a sense of consolation in grief.

The full title of this poem by the Romantic poet William Wordsworth is "Elegiac Stanzas Suggested by a Picture of Peele Castle in a Storm, Painted by Sir George Beaumont." The poem was supposedly written in the wake of Wordsworth's brother's death. In keeping with the poem's form of elegiac stanzas, the rhyme scheme is ABAB and the meter is iambic pentameter.

Farewell, farewell the heart that lives alone,
Housed in a dream, at distance from the Kind!
Such happiness, wherever it be known,
Is to be pitied; for 'tis surely blind.

But welcome fortitude, and patient cheer,
And frequent sights of what is to be borne!
Such sights, or worse, as are before me here.—
Not without hope we suffer and we mourn.

Whitman's "When Lilacs Last in the Dooryard Bloom'd"

Walt Whitman wrote this famous elegy after the death of Abraham Lincoln. Note that this elegy does not have a particular meter or rhyme scheme.

O how shall I warble myself for the dead one there I loved?
And how shall I deck my song for the large sweet soul that has gone?
And what shall my perfume be for the grave of him I love?

Sea-winds blown from east and west,
Blown from the Eastern sea and blown from the Western sea, till there on the prairies meeting,
These and with these and the breath of my chant,
I’ll perfume the grave of him I love.

Using a variation on the elegiac stanza, Robert Frost wrote "To E.T." in quatrains of iambic pentamer that follow an "ABCB" rhyme scheme instead of the traditional "ABAB." The following two stanzas are an excerpt of the longer poem.

I slumbered with your poems on my breast
Spread open as I dropped them half-read through
Like dove wings on a figure on a tomb
To see, if in a dream they brought of you,

I might not have the chance I missed in life
Through some delay, and call you to your face
First soldier, and then poet, and then both,
Who died a soldier-poet of your race.

O Lake! Scarce has a single year coursed past.
To waves that she was meant to see again,
I come alone to sit upon this stone
You saw her sit on then.

You lowed just so below those plunging cliffs.
Just so you broke about their riven flanks.
Just so the wind flung your spray forth to wash
Her feet which graced your banks.

This is a contemporary example of elegy, which is perhaps less admiring of its deceased subject than is typical of the form. The passage below is excerpted from an elegy by Frank Bidart for his father.

Ruth, your last girlfriend, who wouldn’t sleep with you
or marry, because you wanted her
to pay half the expenses, and “His drinking
almost drove me crazy—”
Ruth once saw you
staring into a mirror,
in your ubiquitous kerchief and cowboy hat,
say:
“Why can’t I look like a cowboy?”

You left a bag of money; and were
the unhappiest man
I have ever known well.

Why Do Writers Choose to Write Elegies?

Unlike the classical traditions of epic poetry or medieval ballads, both of which use the third person to focus on figures from popular mythology and folklore, elegies are a deeply personal form of poetry that typically make use of the first person to emphasize the private emotional experiences of individuals. Elegies are a wonderful example of the ways in which poetry can serve a more personal and emotional purpose for the poet, as many poets throughout history have written elegies not only to commemorate a lost loved one, but as a way of mourning and of processing their own grief. Part of the process of writing an elegy, which is frequently made explicit in the language of the poem, is the poet's struggle to make the mystery of death less overwhelming by addressing it directly and contemplating its major and lasting impact on those who witness death and go on living. 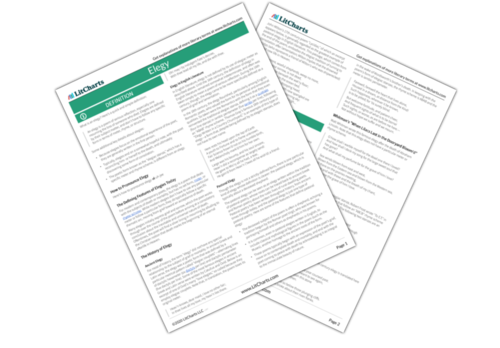