What is an end rhyme? Here’s a quick and simple definition:

End rhyme refers to rhymes that occur in the final words of lines of poetry. For instance, these lines from Dorothy Parker's poem "Interview" use end rhyme: "The ladies men admire, I’ve heard, / Would shudder at a wicked word."

In formal verse (which is the name given to rhymed poetry that uses a strict meter), end rhymes typically repeat according to a pattern called a rhyme scheme. Rhyme schemes are described using letters of the alphabet, so that each line of verse that corresponds to a specific type of rhyme used in the poem is assigned a letter, beginning with "A." For example, a four-line poem in which the first line rhymes with the third, and the second line rhymes with the fourth has the rhyme scheme ABAB, as in the lines below from the poem To Anthea, who may Command him Anything by Robert Herrick:

Types of Rhymes that Can Appear in End Rhymes

Most people, when they think about what constitutes a rhyme, are actually thinking about just one type of rhyme in particular: perfect rhyme. Perfect rhymes refer only to words with identical sounds like "game" and "tame," or "element" and "elephant." But there are actually many different types of rhymes, and all of them can be used to create end rhymes. For instance:

It's worth noting that the vast majority of end rhymes are, in fact, perfect rhymes. And it's also worth noting that there are some sticklers who would argue that, in fact, end rhyme must occur not just in the final word of a line but in the final syllable, and that semirhyme therefore can't ever be an example of end rhyme. But not everyone agrees with that rigid position. You should know that such debates exist, but don't have to worry about "who's right" (unless you feel passionately about one side being right!).

To learn more about the many different types of rhymes that can be used to create end rhymes, take a look at the LitCharts literary term page on rhyme.

End rhyme is not as popular in contemporary poetry as it used to be in previous centuries. Nonetheless, because so much poetry from those past years is so well known (and in many cases better known than a lot of modern poetry) end rhyme still feels like it's everywhere in poetry. End rhyme, also, still is common in poetry for children.

End Rhyme in Dickinson's "Because I could not stop for Death"

This poem by Emily Dickinson is written using end rhymes in an alternating ABCB rhyme scheme (so that only the second and fourth lines rhyme). The rhyme in this example is a perfect rhyme.

End Rhyme in Dr. Seuss's Horton Hears a Who!

The children's books of Dr. Seuss are written using perfect end rhymes. Here, the beginning of Horton Hears a Who! gives a clear example of the way in which end rhymes can have a singsongy effect that is perfect for stories and children's books.

The popular Christian hymn "Amazing Grace" was written in what is referred to as "common verse," a metrical pattern often used in lyrical compositions that is comprised of lines of 4 iambs (iambic tetrameter) alternating with lines of 3 iambs (iambic trimeter). The end rhymes are perfect rhymes.

Amazing grace! How sweet the sound
That saved a wretch like me.
I once was lost but now am found;
was blind but now I see.

End Rhyme in Creeley's "The Conspiracy"

The first and second couplets in this poem by Robert Creeley make use of end rhyme in a slightly more subtle, harder-to-identify form known as slant rhyme which, in this case, involves the use assonance in the final syllables of each line.

Things tend to awaken
even through random communication.

End rhyme is very common song lyrics. It's so common in fact that it's almost mandatory for songs to have rhyme in them, a fact that caused the band 21 Pilots to wish "I didn't have to rhyme every time I sang" in the first part of the song "Stressed Out."

End Rhyme in "Stressed Out" by 21 Pilots

Notice that not every line of this song rhymes. Though after the singer wishes he didn't have to rhyme every time he sings, he then rhymes the next eight lines.

End Rhyme in "California Dreaming" by The Mamas & The Papas

Here's an excerpt from a famous song by The Mamas & The Papas in which every line uses the same rhyme on the sound "ay."

All the leaves are brown and the sky is grey
I've been for a walk on a winter's day
I'd be safe and warm if I was in L.A.
California dreaming on such a winter's day

End Rhyme in "Work" by Rihanna

Often, rhymes in lyrics are not perfect, but rather a type of near rhyme known as slant rhyme. The following exceprt of the lyrics from Rihanna's song "Work" give examples of three different kinds of terminal slant rhyme.

Join me I deserved it
No time to have you lurkin'
If I got right then you might like it
You know I dealt with you the nicest
Nobody touch me, in the righteous
Nobody text me in a crisis
I believed all of your dreams are duration
You took my heart and my keys and my patience
You took my heart off my sleeve a decoration
You mistaken my love I brought for you for foundation

Notice how "deserved it" and "lurkin" have the same vowel sounds in the final two syllables ("ur-ih"), as do "like it" and "nicest" ("eye-ih"), and "duration" and "patience" ("ae-uh"). This use of assonance makes these words an example of slant rhyme.

Why Do Writers Use End Rhymes?

Poets use end rhyme for many of the same reasons they use rhyme in general: because it makes language sound more beautiful and thoughtfully-composed, like music. End rhymes can also help to increase the sense of rhythm in poetry, especially in formal verse, where the use of meter means that all lines have the same number of syllables and that end rhymes therefore occur at highly regular intervals. Furthermore, the last word of every line of a poem is naturally emphasized, so placing a rhyme at the end of the line emphasizes the last word even further. These two facts (the regularity and the increased emphasis of end rhymes) create a sense of a beat within the poem. This heightened rhythmic sense not only makes poetry more pleasant to listen to but easier to both understand and memorize.

The use of rhyme in general has fallen out of favor with many poets writing today. This is especially true of end rhyme, which modern poets often feel can make poems sound too singsongy. However, despite this trend the use of end rhyme remains popular among songwriters and writers of children's books, who need their compositions to be easy to listen to, understand, and memorize. End rhyme is particularly common in song lyrics, where it is usually used in conjunction with internal rhyme to increase the number of rhymes that can be delivered in a single line, which only increases the effect of making songs more rhythmic and memorable. 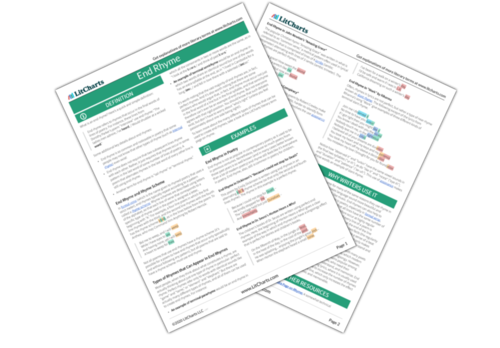