What is irony? Here’s a quick and simple definition:

Irony is a literary device or event in which how things seem to be is in fact very different from how they actually are. If this seems like a loose definition, don't worry—it is. Irony is a broad term that encompasses three different types of irony, each with their own specific definition: verbal irony, dramatic irony, and situational irony. Most of the time when people use the word irony, they're actually referring to one of these specific types of irony.

Some additional key details about irony:

Here's how to pronounce irony: eye-run-ee

Although these three kinds of irony may seem very different at first glance, they all share one important quality: a tension between how things appear and how they really are. For a more in-depth look at each of these devices, please visit their individual pages.

Besides the three main types of irony described above, two other literary devices—sarcasm and satire—share a lot in common with irony:

You can get more details on both sarcasm and satire at their specific pages.

All three forms of irony are used very frequently in literature, theater, and film. In addition, sometimes the irony found in any of these mediums is broader and doesn't fit into any of the specific categories, and is instead just general irony.

Irony in "The Sell Out"

"The Sell Out" by Simon Rich is a short story recently published in the New Yorker that is full of irony. The story is narrated by a Polish Jew named Herschel, who lives in Brooklyn in the early twentieth century. Herschel accidentally preserves himself in brine for one hundred years, and when he is finally discovered, still alive, in 2017, he is introduced to his great-great-grandson, a young man who lives in present-day Brooklyn. On Herschel's first day, the great-great-grandson Simon tells Herschel about computers. Herschel describes the scene (note that Hershel's English isn't all that great):

It takes him long time, but eventually Simon is able to explain. A computer is a magical box that provides endless pleasure for free. Simon is used to constant access to this box—a never-ending flow of pleasures. When the box stops working—or even just briefly slows down—he becomes so enraged that he curses our God, the one who gave us life and brought us forth from Egypt.

This description is a great example of irony in the most general sense. The humor stems from the disparity between what seems to be true to Herschel (that computers are magic pleasure boxes) and what is actually true (that computers are, well, computers, and that people are kind of stupidly addicted to them). The use of irony is effective here because Hershel's description, as outlandish as it is, actually points to something that is true about the way people use computers. Therefore, the disparity between "what is" and "what appears to be" to Herschel isn't merely a comical error; rather, it's ironic because it actually points to a greater truth about its subject.

… historians should and must be precise, truthful and unprejudiced, without allowing self-interest or fear, hostility or affection, to turn them away from the path of truth, whose mother is history.

We can identify the above quotation as an example of verbal irony if we consider that the book's hero, Don Quixote, is fundamentally incapable of distinguishing truth from fiction, and any historian of his life would have to follow a double track of reality and fantasy which continuously overlaps, tangles, and flips. One of the most basic premises of the book is that truth is more difficult to identify than it may seem. Therefore, when the narrator vows to follow the single path of truth, he is being ironic; in reality, he believes this to be impossible.

The device of dramatic irony is especially well-suited to the theater, which displays constantly shifting sets, scenes, and characters to a stationary audience that, therefore, often has a more complete or "omniscient" perspective compared to any of the characters. One excellent example of dramatic irony can be found in Shakespeare's Othello.

Situational Irony in The Producers

In this classic film, two friends come up with a complicated money-making scheme in which they put on a play that they think is absolutely certain to fail. Their plan backfires when the play, entitled "Springtime for Hitler," is so shockingly bad that people think it's a comedy and come to see it in droves. This is an example of situational irony because the outcome is the exact opposite of what the play's producers expected.

Why Do Writers Use Irony?

Irony is a tool that can be used for many different purposes. Though sarcasm and satire are two ways of using irony that are primarily negative and critical, ironic statements can also underscore the fragility, complexity, and beauty of human experience.

Ultimately, irony is used to create meaning—whether it's humorous or profound—out of the gap between the way things appear and how they actually are. 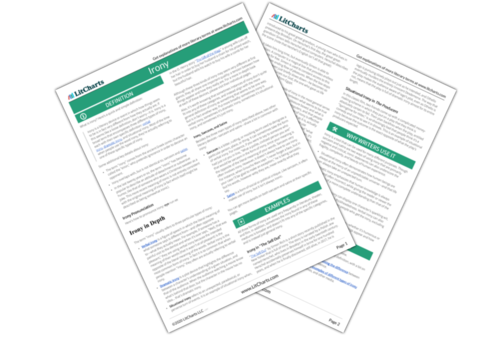