What is mood? Here’s a quick and simple definition:

The mood of a piece of writing is its general atmosphere or emotional complexion—in short, the array of feelings the work evokes in the reader. Every aspect of a piece of writing can influence its mood, from the setting and the imagery to the author's word choice and tone. For instance, a story that begins "It was a dark and stormy night" will probably have an overall dark, ominous, or suspenseful mood.

Some additional key details about mood:

How to Pronounce Mood

Here's how to pronounce mood: mude

A single piece of writing can and usually does employ more than one mood, since different parts of the same work can have different moods, but works are generally characterized by a single overarching mood. So for instance, a story that has happy passages and sad passages might not be defined by either mood, but rather by its overall mood of humorousness.

What Makes Up a Mood?

These are the basic elements that help determine the mood of a piece of writing:

The following examples of mood are from different types of literature: plays, novels, and poems. In each, we identify how the author builds the mood of the work using a combination of setting, imagery, tone, diction, and plot.

Shakespeare's Hamlet is a play about death, grief, and madness (among other things). Shakespeare helps to establish the fantastical and ominous mood of the play early on by making use of setting, imagery, tone, and diction. The first scene takes place at night (setting), when three guards spot the ghost of Old Hamlet walking the castle grounds (imagery). But since it's a play, the mood depends almost entirely on the dialogue of the characters. The guards say to one another, "It harrows me with fear and wonder," and "How now, Horatio? You tremble and look pale. Is not this something more than fantasy? What think you on ’t?" (diction). To the ghost, the guards speak animatedly and urgently, shouting "Stay! Speak, speak! I charge thee, speak!" (tone). Shakespeare continues to build on and develop the mood of the play throughout, but he opens strongly with a scene that establishes the mood of the entire play as one of excitement and suspense mixed with fearfulness and dread.

Mood in Alice's Adventures in Wonderland

Lewis Caroll's Alice's Adventures in Wonderland has a whimsical, lighthearted, and often cheerful mood. It uses a combination of fantastical imagery, a famously "curious" setting, and lighthearted language to set the mood. In this passage, for instance, the narrator's description of the giant caterpillar makes it seem as though nothing at all were out of the ordinary about the scene, contributing to the book's overall whimsical mood:

She stretched herself up on tiptoe, and peeped over the edge of the mushroom, and her eyes immediately met those of a large caterpillar, that was sitting on the top with its arms folded, quietly smoking a long hookah, and taking not the smallest notice of her or of anything else.

Even in her moments of discouragement, Alice manages to find a sense of wonderment in her surroundings:

"It was much pleasanter at home," thought poor Alice, "when one wasn't always growing larger and smaller, and being ordered about by mice and rabbits. I almost wish I hadn't gone down that rabbit-hole—and yet—and yet—it's rather curious, you know, this sort of life!"

You could even say that, since the book's protagonist is a young child and the reader experiences much of the story through her eyes, the overall mood is "innocent" or "childlike." Indeed, Caroll's book can be thought of as a type of allegorical story that captures the way young children experience the world: with awe, wonderment, and joy. Not only does Alice experience these emotions—but, by extension, many readers do, too.

Tennyson's famous poem is an excellent example of a work that establishes its mood quickly and effectively using just setting and diction. The poem begins:

It little profits that an idle king,
By this still hearth, among these barren crags,
Match'd with an aged wife, I mete and dole
Unequal laws unto a savage race,
That hoard, and sleep, and feed, and know not me.

The mood of the poem is gloomy, melancholic, and reflective—which is reflected both in the poem's setting (still hearth, barren crags) as well as the poet's choice of words (the speaker describes himself as "idle," his wife as "aged," and his subjects as a "savage race" of hoarding strangers). The poem is written from the perspective of a hero reflecting on his life in old age, so the mood helps readers to have a similar emotional experience to the one the speaker seems to be having.

What's the Function of Mood in Literature?

Every piece of writing has a mood, but writers can use moods to achieve vastly different effects in their writing. In general, mood serves the following functions in literature: 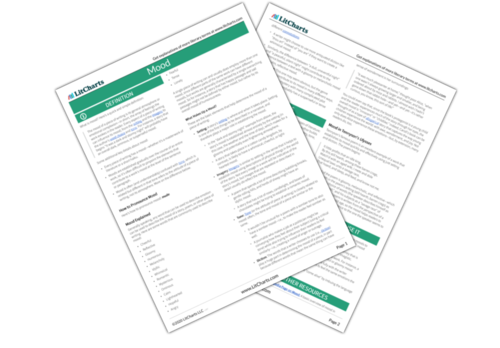