What is an oxymoron? Here’s a quick and simple definition:

An oxymoron is a figure of speech in which two contradictory terms or ideas are intentionally paired in order to make a point—particularly to reveal a deeper or hidden truth. The most recognizable oxymorons are adjective-noun pairs, as in the phrase "proud humility." But oxymorons can also occur over the course of a clause or sentence, as in "That silence after your joke was deafening." In both examples, the oxymoron joins opposite ideas to make a point (such as that an awkward silence can have a presence comparable to a loud sound).

Some additional key details about oxymorons:

How to Pronounce Oxymoron

Here's how to pronounce oxymoron: ahk-see-mor-on

Oxymoron is often confused with other related terms, such as "contradiction in terms," "paradox," and "antonym." Read on to find out how oxymoron is distinct from each of these terms.

Today, many people use the term "oxymoron" as a synonym for any expression whose components contradict one another, even contradictions that are unintentional or come up in casual conversation (also called a "contradiction in terms"). However, an oxymoron is more specific than a contradiction in terms: it must be crafted intentionally in order to suggest that two contradictory ideas go together because their unlikely combination reveals a deeper truth.

For example, someone might (wrongly) call the phrase "business ethics" an oxymoron, simply to make the claim that business is always unethical. However, while it's possible to argue that "business ethics" is a contradiction in terms, the phrase is not an oxymoron. The beauty of an oxymoron is that it deliberately combines two words or ideas that contradict one another, not simply to point out how those ideas don't fit, but for the purpose of showing that a contradiction actually does make sense or reveal a deeper meaning.

For instance, a true oxymoron occurs when Juliet says to Romeo in Romeo and Juliet that "Parting is such sweet sorrow." Shakespeare has purposefully created this contradiction to capture the deeper truth of the simultaneous pain and joy of departing from a loved one—he's trying to communicate that being separated from your beloved is painful and yet, precisely because it's painful, parting reminds you of your love and joy.

To sum up, an oxymoron is not simply a contradiction in terms. A true oxymoron must be deliberately crafted in advance, with the goal of creating a rhetorical effect or revealing a deeper figurative meaning.

It's also helpful to understand the relationship between oxymoron and paradox. Both have to do with using contradiction to reveal deeper truths, but they differ in an important way: an oxymoron is a device, while a paradox is an idea.

Words that are antonyms have opposite meanings from one another. For example, "good" and "bad" are antonyms. Some people mistake pairs of antonyms for oxymorons, but they are not the same.

Oxymorons can add color, humor, and meaning to language in all sorts of ways. Oxymorons are useful tools for authors and poets because they're based in contradiction, which makes them capable of describing complex or conflicting emotions.

Oxymoron in Shakespeare's Romeo and Juliet

Shakespeare used a great many oxymorons in his plays. Here's one more example from Romeo and Juliet. In these lines from Act 1, Scene 1, Romeo tells his cousin Benvolio about his feelings for a woman named Rosamund who doesn't love him back:

O heavy lightness, serious vanity,
Misshapen chaos of well-seeming forms!
Feather of lead, bright smoke, cold fire, sick health,
Still-waking sleep, that is not what it is!
This love feel I, that feel no love in this.

This cascade of oxymorons, placed one after the other, heightens the contrast between Romeo's idea of love and what he's actually experiencing. Because there are so many oxymorons, the paired words take on a clichéd tone that reflects on the quality of Romeo's "love" for Rosamund, which (we know from the title, "Romeo and Juliet") is fleeting and hasn't anything to do with the love affair that drives the rest of the play.

The following oxymoron occurs repeatedly throughout Macbeth. This first example is from the play's opening scene and it is part of a charm chanted by witches:

Fair is foul, and foul is fair:
Hover through the fog and filthy air.

In this particular scene, the oxymoron "fair is foul, and foul is fair" speaks to the witches' evil character. They have an inverted moral code that values "the foul" and dislikes "the fair." On top of establishing the witches' cruelty, the line is also a signal to the audience to be on guard throughout the play—a warning that characters who seem fair may be foul, and vice versa. There's a drama and simplicity to the "fair is foul" oxymoron, which becomes a refrain as the play goes on and characters begin to act according to the witches' moral code.

Nabokov's novel Ada tells the story of Van and Ada, a sister and brother who meet as teenagers and fall in love, believing that they are cousins. In this example, Nabokov describes Ada, seen through Van's eyes, absorbed in one of her favorite activities:

On those relentlessly hot July afternoons, Ada liked to sit on a cool piano stool of ivoried wood at a white-oilcloth'd table in the sunny music room, her favorite botanical atlas open before her, and copy out in color on creamy paper some singular flower...Or else she combined one species with another (unrecorded but possible), introducing odd little changes and twists that seemed almost morbid in so young a girl so nakedly dressed.

The "nakedly dressed" oxymoron immediately follows the description of Ada's drawings, in which she combines together unlikely species: just as oxymorons conjoin unlikely words and ideas. The contradiction contained in "nakedly dressed" echoes the impossibility of the hybrids Ada draws, and more importantly, it expresses both Van's feeling that he can see into her soul despite the clothes covering her body, his yearning for her such that her clothes only suggest to him her body beneath them, and at the same time (because it's an oxymoron and the words contradict) the impossibility of the siblings' relationship. This example is similar to the lines above from Romeo and Juliet, in that both use the contradictory terms of an oxymoron to reflect the characters' experience of thwarted love.

Oxymoron in Ernest Hemingway's For Whom the Bell Tolls

These lines from Chapter 7 of For Whom the Bell Tolls describe an encounter between Robert Jordan, a young American soldier fighting in the Spanish Civil War, and his lover María.

She held herself tight to him and her lips looked for his and then found them and were against them and he felt her, fresh, new and smooth and young and lovely with the warm, scalding coolness and unbelievable to be there in the robe that was as familiar as his clothes, or his shoes, or his duty and then she said, frightenedly, “And now let us do quickly what it is we do so that the other is all gone.”

The couple's relationship becomes a bright spot for both of them in the midst of war, but ultimately also a source of pain and confusion for Jordan, as he struggles to balance his obligation to fight with his desire to live happily by Maria's side. The contradiction contained within the oxymoron "scalding coolness" emphasizes the couple's conflicting emotions and impossible situation.

The following lines refer to Lancelot, who is in love with Guinevere, King Arthur's wife. In the poem, Lancelot is tempted by another woman, but he remains "true" to Guinevere.

The shackles of an old love straitened him,
His honour rooted in dishonour stood,
And faith unfaithful kept him falsely true.

The sequence of oxymorons in this example (honour/dishonour, "faith unfaithful," "falsely true") emphasizes the contrast between Lancelot's "faithful" love for Guinevere, and the fact that his relationship with Guinevere makes them both unfaithful to Arthur.

Oxymoron in "The Sounds of Silence" by Simon and Garfunkel:

Paul Simon wrote the song The Sounds of Silence about the difficulty people have in communicating with one another, but the lyrics were later interpreted as a reference to the Vietnam War (a war that many would say was full of contradictions):

Hello darkness, my old friend
I've come to talk with you again
Because a vision softly creeping
Left its seeds while I was sleeping
And the vision that was planted in my brain
Still remains
Within the sound of silence

Why Do Writers Use Oxymorons?

Some of the greatest truths lie in contradiction, and oxymoron is one of the best figures of speech for expressing contradiction. For example, as we covered above, Shakespeare used oxymorons to describe strong, opposing emotions that often occur together, and also to show how the friction between those two feelings—love and hate, or love and pain, for example—can coexist and shape characters' experiences. However, oxymorons aren't always so serious. The following example is from Alexander Pope's poem, "Essay on Criticism":

The bookful blockhead ignorantly read,
With loads of learned lumber in his head,
With his own tongue still edifies his ears,
And always list’ning to himself appears.

In this case, the oxymorons "bookful blockhead" and "learned lumber" add humor and spice to Pope's writing. Even so, Pope uses oxymoron to emphasize that people who are well-read are not necessarily original thinkers. 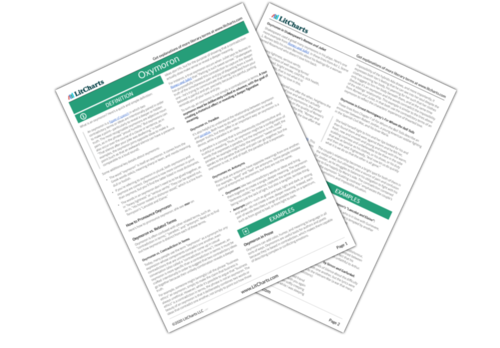