What is a rhyme scheme? Here’s a quick and simple definition:

A rhyme scheme is the pattern according to which end rhymes (rhymes located at the end of lines) are repeated in works poetry. Rhyme schemes are described using letters of the alphabet, such that all the lines in a poem that rhyme with each other are assigned a letter, beginning with "A." For example, a four-line poem in which the first line rhymes with the third line, and the second line rhymes with the fourth line has the rhyme scheme ABAB, as in the poem "Roses are red, / Violets are blue. / Shakespeare is dead? / I had no clue."

A poem's rhyme scheme can be anything the poet wants it to be, but here's a list of some of the more common rhyme schemes:

Keep in mind that this is just a list of some of the more common types of rhyme scheme. It's not a list of all the different forms of poetry, since the form of a poem is defined by more than just its rhyme scheme.

Generally speaking, poems that have rhyme schemes are written in what's known as formal verse (which is the name given to rhymed poetry that uses a strict meter). All formal verse poems have some sort of rhyme scheme.

In addition, certain forms of poems, such as sonnets or villanelles have a pre-determined rhyme scheme. Poets wanting to write such poems have to match the rhyme scheme they use to the rhyme scheme defined by the type of poem in question.

The pattern of a rhyme scheme can be specific to a single stanza of a poem, or it can repeat throughout an entire poem. For instance, if a poem is said to have an ABAB rhyme scheme, that might mean that the same two rhymes are used throughout the whole poem (as in, ABAB ABAB ABAB), but this is pretty uncommon in English—so more likely than not it's just a shorthand way of saying that each stanza uses a rhyme scheme of ABAB, but the A and B rhymes are not actually the same between stanzas. In this case, a longer poem with an ABAB rhyme scheme, if you were to write it out, would actually be ABAB CDCD EFEF, and so on. If you're not sure whether a rhyme scheme is supposed to apply to a whole poem or just a single stanza, the easiest way to figure this out is to just check the poem to see if rhymes are the same between different stanzas.

There are really only a few circumstances in which it makes sense to write out the entire rhyme scheme of a poem from beginning to end (instead of just using the single-stanza rhyme scheme as shorthand): when describing "fixed verse forms," or poems with a predetermined number of lines and a fixed rhyme scheme, such as a sonnet. Sonnets are 14-line poems that typically use a rhyme scheme of ABBA ABBA CDEDCE—so in this case, writing out the rhyme scheme of the entire poem is actually the most efficient way of describing it.

Most people, when they think about what constitutes a rhyme, are actually thinking about one type of rhyme in particular, called perfect rhyme, which only includes words with identical sounds like "game" and "tame," or "table" and "fable." But in fact, rhyme is a rather broad and loosely-defined literary device that includes many different types of repetition of sounds between words. For instance, the words "crate" and "braid" make a specific type of rhyme called slant rhyme, because they both share a vowel sound ("ay") in their final syllable. When it comes to rhyme schemes and how they're written out, poems that use imperfect rhymes are no different from poems that use perfect rhymes. Therefore, this excerpt from a poem by Yeats would be said to have an ABAB rhyme scheme even though it uses slant rhyme:

When have I last looked on
The round green eyes and the long wavering bodies
Of the dark leopards of the moon?
All the wild witches, those most noble ladies

Some types of poems, such as ballades, have entire lines that repeat at regular intervals throughout the poem. These repeating lines are called refrains. For poems that use refrains, it's common to write the rhyme scheme in lowercase letters and then to use an uppercase letter to indicate the refrain. For example, ballades consist of three eight-line stanzas with a rhyme scheme of ababbcbC, plus a final four-line stanza with a rhyme scheme of bcbC, where the final line of every stanza is the refrain.

The following examples show all sorts of different rhyme schemes.

Coupled Rhyme in Dr. Seuss's Horton Hears a Who!

Dr. Seuss wrote many of his children's books in formal verse. The opening stanza of his book Horton Hears a Who, excerpted below, uses a simple rhyme scheme of coupled rhyme (AABB).

Chain Rhyme in Frost's "Stopping by Woods on a Snowy Evening"

In the excerpt of Frost's poem shown here, the B rhyme of the first stanza is taken up as the predominant rhyme in the second stanza, while the C rhyme in the second stanza then becomes the predominant line in the third stanza—making the rhyme scheme an example of chain rhyme (in which stanzas are linked together by rhymes that carry over from one stanza to the next).

Whose woods these are I think I know.
His house is in the village though;
He will not see me stopping here
To watch his woods fill up with snow.

My little horse must think it queer
To stop without a farmhouse near
Between the woods and frozen lake
The darkest evening of the year.

He gives his harness bells a shake
To ask if there is some mistake.
The only other sound’s the sweep
Of easy wind and downy flake.

Milton's "When I Consider How My Light is Spent"

When I consider how my light is spent
Ere half my days in this dark world and wide,
And that one talent which is death to hide
Lodg'd with me useless, though my soul more bent
To serve therewith my Maker, and present
My true account, lest he returning chide;
"Doth God exact day-labour, light denied?"
I fondly ask. But Patience to prevent
That murmur, soon replies: "God doth not need
Either man's work or his own gifts; who best
Bear his mild yoke, they serve him best. His state
Is kingly. Thousands at his bidding speed
And post o'er land and ocean without rest:
They also serve who only stand and wait."

Andrew Lang's "Ballade to an Optimist"

This poem follows the standard form of the ballade. It has three stanzas of eight lines each, a four-line final stanza, and a refrain in the last line of each stanza. It uses the typical ballade rhyme scheme of ababbcbC for the eight-line stanzas and bcbC for the final stanza.

And, sometimes on a summer's day
To self and every mortal ill
We give the slip, we steal away,
To walk beside some sedgy rill:
The darkening years, the cares that kill,
A little while are well forgot;
When deep in broom upon the hill,
We'd rather be alive than not.

What though we wish the cats at play
Would some one else's garden till;
Though Sophonisba drop the tray
And all our worshipped Worcester spill,
Though neighbours "practise" loud and shrill,
Though May be cold and June be hot,
Though April freeze and August grill,
We'd rather be alive than not.

And, sometimes on a summer's day
To self and every mortal ill
We give the slip, we steal away,
To walk beside some sedgy rill:
The darkening years, the cares that kill,
A little while are well forgot;
When deep in broom upon the hill,
We'd rather be alive than not.

Pistol, with oaths didst thou fulfil
The task thy braggart tongue begot,
We eat our leek with better will,
We'd rather be alive than not.

This poem by Oscar Wilde is a variation on a traditional ballad. It uses a six-line stanza instead of the ballad's usual four-line stanza, and it has an "ABCBDB" rhyme scheme.

He did not wear his scarlet coat,
For blood and wine are red,
And blood and wine were on his hands
When they found him with the dead,
The poor dead woman whom he loved,
And murdered in her bed.

He walked amongst the Trial Men
In a suit of shabby grey;
A cricket cap was on his head,
And his step seemed light and gay;
But I never saw a man who looked
So wistfully at the day.

Why Do Writers Use Rhyme Schemes?

Poets use rhyme schemes for many of the same reasons they use rhyme: because it makes language sound more beautiful and thoughtfully-composed, like music. In the majority of rhyme schemes, rhymes repeat at regular intervals, dramatically increasing both the rhythm and musicality of poetry and in the process making the poem more pleasant to listen to, easier to understand, and more memorable.

Poets also choose specific rhyme schemes for different purposes. For instance, rhyme schemes in which rhymes are coupled (AABB) or in which they alternate (ABAB) tend to feel highly predictable and repetitive, which makes them well-suited to children's books and songs. However, after a while these rhyme schemes can start to seem a bit simplistic and tiresome. For that reason, poets who consider their work to be more literary or complex might choose to write in a poetic form that uses a more elaborate rhyme scheme (such as the sestina), both as a way of challenging themselves, and as a way of using rhyme more subtly in their work. 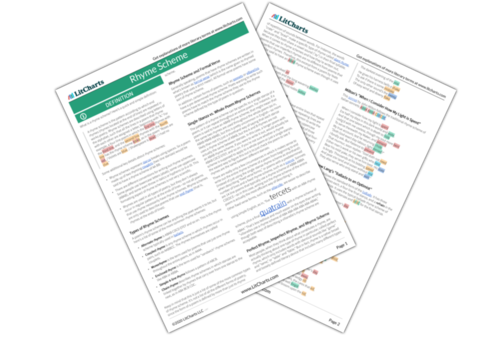