What is sibilance? Here’s a quick and simple definition:

Sibilance is a figure of speech in which a hissing sound is created within a group of words through the repetition of "s" sounds. An example of sibilance is: "Sadly, Sam sold seven venomous serpents to Sally and Cyrus in San Francisco."

Some additional key details about sibilance:

Here's how to pronounce sibilance: sih-buh-lence

There are a few important details to understand about sibilance.

The Debate Over Other "SH" and Other Letters

There is some disagreement as to what kinds of sounds are really sibilant. For instance, some people also include some or all of the following sounds as being sibilant because they all create a hiss not that different from the "s" sound:

There are also sibilance sticklers, however, who would disagree that any sound other than the "s" sound can produce true sibilance. People in this camp would assert that, while similar to the sibilant "s" sound, "sh," "th," "f," "z," and "v" sounds are not truly sibilant.

Sibilance can be found in all types of writing, but it's most common in poetry and song lyrics.  In the examples below, we highlight all the sibilant S's in green. We use yellow for the other hissing sounds like "sh," "f," and soft "th," and red for buzzing sounds like "z," "v," and hard "th," since some people would argue these are not, properly speaking, sibilant.

At the very beginning of his epic poem, Paradise Lost, Milton uses subtle sibilance to slow the reader down, drawing attention to the density and subtlety of his language. It is difficult, too, not to be reminded of the "s" sound of the serpent who tempts Eve with the "fruit of that forbidden tree," leading to the expulsion of mankind from the garden of Eden.

OF MAN’S first disobedience, and the fruit
Of that forbidden tree whose mortal taste
Brought death into the World, and all our woe,
With loss of Eden, till one greater Man
Restore us, and regain the blissful Seat,
Sing, Heavenly Muse, that, on the secret top
Of Oreb, or of Sinai, didst inspire
That Shepherd who first taught the chosen seed

In this passage from Shakespeare's Hamlet, Bernardo tells Horatio about seeing the Ghost of Old Hamlet, and does so in a hushed and urgent tone. The sibilance here intensifies his hushed tone, causing those assembled (and the audience) to listen more closely.

Sit down awhile;
And let us once again assail your ears,
That are so fortified against our story
What we have two nights seen.

Sibilance in John Donne's "The Flea"

Not all instances of sibilance need to be overwhelming. Here, Donne uses subtly sibilant sounds to cause the first line to "swell" into the second.

And pampered swells with one blood made of two,
And this, alas, is more than we would do.

Bob Dylan, "All I Really Wanna Do"

The sibilance in this excerpt emphasizes Dylan's sense of playfulness in songwriting. Here, sibilance is combined with rhyme to intensify its effect even further.

I don't wanna meet your kin
Make you spin or do you in
Or select you, or dissect you
Or inspect you, or reject you...

Sibilance in the Song "Steam Heat" from The Pajama Game

In this example from the musical The Pajama Game, the sibilance is onomatopoeic—that is, the sound of the words mimics the actual sound of steam escaping from a pipe. It's also fun to sing, making it a playful and memorable song.

The radiator's still hissin'
Still I need your kissin'
To keep me from freezin' each night ...
I've got FSSSSSSSSS... steam heat!

Why Do Writers Use Sibilance?

Sibilance can give language a musical element, and can help emphasize words that resonate with the main ideas or themes of the work. All forms of repetition tend to catch the attention of readers, but the repetition of sibilant sounds is particularly noticeable when spoken aloud. When "s" sounds are strung together, they can add a playful quality to the text, and make it hard to ignore. Here's a rundown of all the reasons a writer might choose to employ sibilance in their writing: 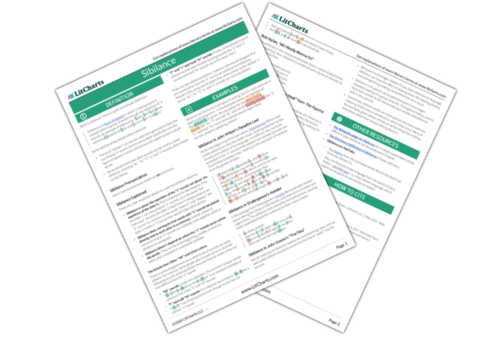