What is stream of consciousness? Here’s a quick and simple definition:

Stream of consciousness is a style or technique of writing that tries to capture the natural flow of a character's extended thought process, often by incorporating sensory impressions, incomplete ideas, unusual syntax, and rough grammar.

Some additional key details about stream of consciousness:

What Makes Stream of Consciousness Different?

Traditional prose writing is highly linear—one thing or idea follows after another in a more or less logical sequence, as in a line. Stream of consciousness is often non-linear in a few key ways that define the style: it makes use of unusual syntax and grammar, associative leaps, repetition, and plot structure.

Stream of Consciousness in Literary History

The term “stream of consciousness” originated in the 19th century, when psychologists coined the term to describe the constant flow of subjective thoughts, feelings, memories, and observations that all people experience. Beginning in the early 20th century, however, literary critics began to use “stream of consciousness” to describe a narrative technique pioneered by writers like Dorothy Richardson, Marcel Proust, James Joyce, and Virginia Woolf. Many of these writers were interested in psychology and the "psychological novel," in which writers spend at least as much time describing the characters’ thoughts, ideas, and internal development as they do describing the action of the plot.

Stream of Consciousness vs. Interior Monologue

Both interior monologue and stream of consciousness involve the presentation of a character's thoughts to the reader. However, there are differences between the two.

Stream of consciousness became widespread as a literary technique during the Modernist movement that flourished in the years just before and then after World War I (the early to mid 20th century). Even as Modernism gave way to other movements, it remained as a technique, and is still used not infrequently today.

Stream of Consciousness in Mrs. Dalloway by Virginia Woolf

Virginia Woolf is known for using stream of consciousness in her writing. The novel Mrs. Dalloway follows the thoughts, experiences, and memories of several characters on a single day in London. In this passage, the title character, Clarissa Dalloway, watches cars driving by:

She had a perpetual sense, as she watched the taxi cabs, of being out, out, far out to sea and alone; she always had the feeling that it was very, very dangerous to live even one day. Not that she thought herself clever, or much out of the ordinary. How she had got through life on the few twigs of knowledge Fraulein Daniels gave them she could not think. She knew nothing; no language, no history; she scarcely read a book now, except memoirs in bed; and yet to her it was absolutely absorbing; all this; the cabs passing; and she would not say of Peter, she would not say of herself, I am this, I am that.

Woolf does more than simply say "Mrs. Dalloway watched the taxis and thought about her life." Rather, she lets the reader into the character's thoughts by using long sentences with semicolons to show the slow drift of ideas and the transitions between thoughts. Readers are able to watch as Mrs. Dalloway's mind moves from observations about things she is seeing to reflections on her general attitude towards life, and then moves on to memories from her childhood, then back to the taxi cabs in the street, and finally to Peter, a former romantic interest. This is an excellent example of using associative leaps and sensory impressions to create a stream of consciousness. Woolf manages to convey not only the content but the structure and process of Mrs. Dalloway's thoughts, a fact which is all the more impressive because she does so while writing in the third person.

Stream of Consciousness in Beloved by Toni Morrison

Toni Morrison uses stream of consciousness in passages throughout Beloved. In this passage, readers hear the voice of a character named Beloved who seems to be the spirit of the murdered infant of another character named Sethe:

Morrison doesn't use proper capitalization or grammar throughout the passage (e.g., "join" is used as a noun). In the place of punctuation, Morrison simply inserts gaps in the text. She also makes use of repetition: when Beloved repeats the words, "I am not dead," she seems to be willing herself to live through a kind of mantra or incantation. Morrison uses run-on sentences and lack of punctuation to show the frantic urgency that Beloved feels when she finds herself alone in death, and to convey her deep desire to be reunited with Sethe—effectively letting readers "listen in" on her thoughts.

Shall I part my hair behind? Do I dare to eat a peach?
I shall wear white flannel trousers, and walk upon the beach.
I have heard the mermaids singing, each to each.

I do not think that they will sing to me.

The poem generally follows traditional grammar and syntax, but Eliot moves from idea to idea and sentence to sentence using associative thought. For example, when he thinks of walking on the beach, he is reminded of mermaids. And while it's not immediately clear what peaches and mermaids have to do with old age, the passage shows readers something about how the speaker's mind wanders.

Stream of Consciousness in As I Lay Dying by William Faulkner

Like Virginia Woolf, William Faulkner is known for his use of stream of consciousness. In this passage from his novel As I Lay Dying, the character Jewel expresses his frustration that, as his mother is dying, his half-brother is noisily building her a casket just outside her window.

Because I said If you wouldn't keep on sawing and nailing at it until a man cant sleep even and her hands laying on the quilt like two of them roots dug up and tried to wash and you couldn't get them clean. I can see the fan and Dewey Dell's arm. I said if you'd just let her alone. Sawing and knocking, and keeping the air always moving so fast on her face that when you're tired you cant breathe it, and that goddamn adze going One lick less. One lick less. One lick less until everybody that passes in the road will have to stop and see it and say what a fine carpenter he is. If it had just been me when Cash fell off of that church and if it had just been me when pa laid sick with that load of wood fell on him, it would not be happening with every bastard in the county coming in to stare at her because if there is a God what the hell is He for. It would just be me and her on a high hill and me rolling the rocks down the hill faces and teeth and all by God until she was quiet and not that goddamn adze going One lick less. One lick less and we could be quiet.

The repetition of the phrase "one lick less" helps convey the way Jewel seems to bristle at the repetitive noises made by the saw and the adze outside the window, each noisy "lick" a reminder of his mother's impending death. His sentences also take strange turns and arrive at unexpected places, as when he begins a sentence with a memory of Cash falling off a roof, moves on to lament the constant train of visitors to his mother's room, and ends quite memorably by asking (without the use of a question mark) "because if there is a God what the hell is He for." The passage is incredibly effective at depicting the dizzying range of thoughts and emotions Jewel experiences as he visits the room of his dying mother.

Why Do Writers Use Stream of Consciousness?

Writers use stream of consciousness not only to show what a character is thinking, but to actually replicate the experience of thinking, which allows the reader to enter the mind and world of the character more fully. Many people find stream of consciousness writing to be difficult to read, and indeed it does require readers to think in different ways—but this is actually one reason why many writers choose to use the technique. Readers may have to work a bit harder to discern the meaning of a particular sentence, or make inferences about the relationship between seemingly unrelated thoughts in order to fully understand the events of the story, but this is what makes reading stream of consciousness a rich and radically different experience from reading conventional prose.

Other Helpful Stream of Consciousness Resources 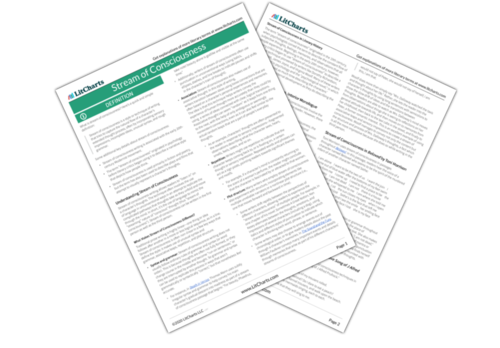