What is tone? Here’s a quick and simple definition:

The tone of a piece of writing is its general character or attitude, which might be cheerful or depressive, sarcastic or sincere, comical or mournful, praising or critical, and so on. For instance, an editorial in a newspaper that described its subject as "not even having the guts to do the job himself," has a tone that is both informal and critical.

Some additional key details about tone:

How to Pronounce Tone

Here's how to pronounce tone: tohn

It is always possible to describe the way that a writer uses language. Therefore, every piece of writing has a tone. Even when a writer's aim is to use completely neutral language—as is often the case in scientific papers or investigative journalism—the language still sounds a certain way, whether it's "scientific," "journalistic," "formal," "professional," or even "mechanical." The way a writer makes use of tone can tell you a lot about the writer's attitude or relationship toward their subject matter and what they are trying to say about it, as well as the effect they are trying to create for their reader.

Here's just a partial list of words that are commonly used to talk about tone, with examples of the types of writing they might be used to describe:

The tone of a piece of writing depends on a confluence of different factors, including:

All of these things work together to determine the tone of a piece of writing.

The Difference Between Tone and Mood

The words "tone" and "mood" are often used interchangeably, but the two terms actually have different meanings.

While tone and mood are distinct literary devices, they are often closely related. For example, it wouldn't be unusual for a poem with a somber tone to also have a somber mood—i.e., to make the reader feel somber as well. And as we explained above, a journalist who makes a jab at a politician might be conveying how they feel about their subject (using a critical tone) while also trying to influence their readers to feel similarly—i.e., to create a mood of anger or outrage.

Since every text has a tone, there are essentially endless examples of tone. The examples below illustrate different types of tone.

Tone in U.A. Fanthorpe's "Not my Best Side"

The poem "Not my Best Side" by U.A. Fanthorpe has a lighthearted and ironic tone. The poem concerns the painting Saint George and the Dragon by Paolo Uccello, and pokes fun at the way the various characters are portrayed in the painting—the dragon, the maiden, and the knight who is supposedly rescuing her. Fanthorpe creates a contrast between her modern, colloquial way of speaking and the medieval subject matter of her poem. Using colloquial words like "sexy" and phrases like "if you know what I mean," Fanthorpe creates a lighthearted, conversational tone. But this conversational tone also has the effect of imbuing the poem with a tone of irony because it is used to describe the unlikely scenario of a maiden falling in love with a dragon.

It's hard for a girl to be sure if
She wants to be rescued. I mean, I quite
Took to the dragon. It's nice to be
Liked, if you know what I mean. He was
So nicely physical, with his claws
And lovely green skin, and that sexy tail

The poem "Lycidas" by John Milton has a mournful tone. The poem was inspired by the untimely death of Milton's friend, who drowned. To express his grief, and set the sorrowful and mournful tone, Milton uses words and phrases with negative connotations, like, "watery bier" (or "tomb"), "parching wind" and "melodious tear."

For Lycidas is dead, dead ere his prime,
Young lycidas, and hath not left his peer.
Who would not sing for Lycidas? he knew
Himself to sing, and build the lofty rhyme
He must not float upon his watery bier
Unwept, and welter to the parching wind,
Without the meed of some melodious tear.

In many passages in Gustave Flaubert's Madame Bovary, Flaubert's own cynicism about romance shines through the third-person narration to imbue the work with a tone of cynicism. Bored by her husband and desperate for a passionate love affair like the sort she reads about in romance novels, Emma Bovary gets involved with a notorious womanizer. Flaubert highlights Emma's foolishness for falling for such an obvious hack, who sees her as no different from any other mistress:

Emma was just like any other mistress; and the charm of novelty, falling down slowly like a dress, exposed only the eternal monotony of passion, always the same forms and the same language. He did not distinguish, this man of such great expertise, the differences of sentiment beneath the sameness of their expression.

Flaubert sets the cynical tone in part by describing, using figurative language, how the charm of novelty, for Madame Bovary's lover, fell down "slowly like a dress," suggesting that what she experiences as romance, her lover experiences only as an extended prelude to sex.

What's the Function of Tone in Literature?

First and foremost, tone clues readers into the essence and the purpose of what they're reading. It wouldn't make sense to use a wordy, poetic tone to write a simple set of directions, just like it wouldn't make sense to use a dry, unfeeling tone when writing a love poem. Rather, writers set the tone of their work to match not only the content of their writing, but also to suit the purpose they intend for it to serve, whether that is to convey information clearly, to make people laugh, to lavish praises on someone, or something else. Additionally, tone can serve the following purposes:

Simply put, establishing the tone of a work is important because it helps writers show readers what the work is trying to accomplish, and what attitude the work takes toward its own subject matter. 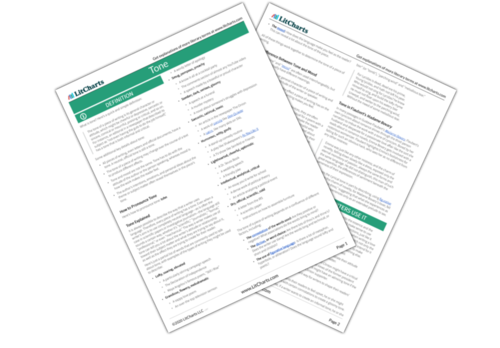