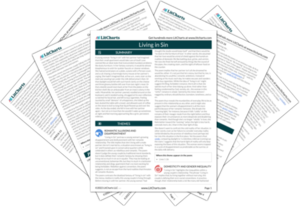 "Living in Sin" is an early-career poem by Adrienne Rich, first published in The New Yorker in 1954 and later collected in The Diamond Cutters and Other Poems (1955). It depicts a young woman "living in sin"—living together outside marriage—with a male partner in a dingy apartment. Her fantasy of a romantic bohemian lifestyle turns into a reality of daily drudgery, leaving her increasingly dissatisfied. The poem is a sharp portrait of romantic disillusionment, as well as a preview of the feminist themes that would define much of Rich's later work. 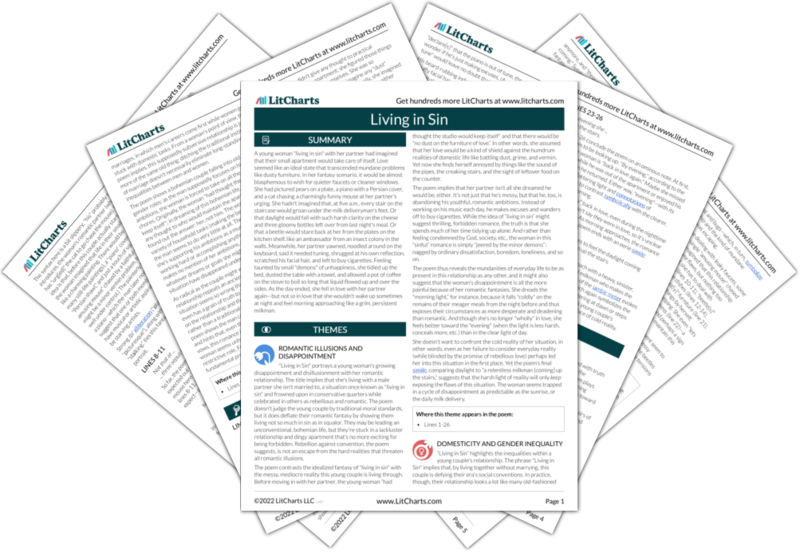 Get the entire guide to “Living in Sin” as a printable PDF.
Download

The Full Text of “Living in Sin”

The Full Text of “Living in Sin”

1She had thought the studio would keep itself;

2no dust upon the furniture of love.

3Half heresy, to wish the taps less vocal,

4the panes relieved of grime. A plate of pears,

5a piano with a Persian shawl, a cat

7had risen at his urging.

8Not that at five each separate stair would writhe

9under the milkman's tramp; that morning light

10so coldly would delineate the scraps

12that on the kitchen shelf among the saucers

13a pair of beetle-eyes would fix her own—

14envoy from some village in the moldings . . .

16sounded a dozen notes upon the keyboard,

17declared it out of tune, shrugged at the mirror,

18rubbed at his beard, went out for cigarettes;

19while she, jeered by the minor demons,

20pulled back the sheets and made the bed and found

21a towel to dust the table-top,

22and let the coffee-pot boil over on the stove.

23By evening she was back in love again,

24though not so wholly but throughout the night

25she woke sometimes to feel the daylight coming