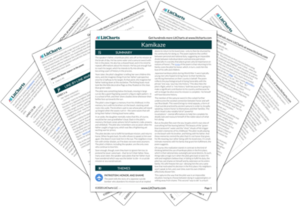 "Kamikaze" was written by contemporary British poet Beatrice Garland and published in The Invention of Fireworks (2013). The title refers to Japanese pilots during World War II tasked with flying a suicide mission. With planes full of explosives and just enough fuel to make it to their target, kamikaze pilots had to fly directly at American warships to inflict maximum damage—killing themselves in the process. The poem tells the story of one particular pilot who decides to turn back, prompted by a childhood memory of his brother and father by the sea. Upon his return, however, his whole family disown him—including the poem's main speaker, his daughter. 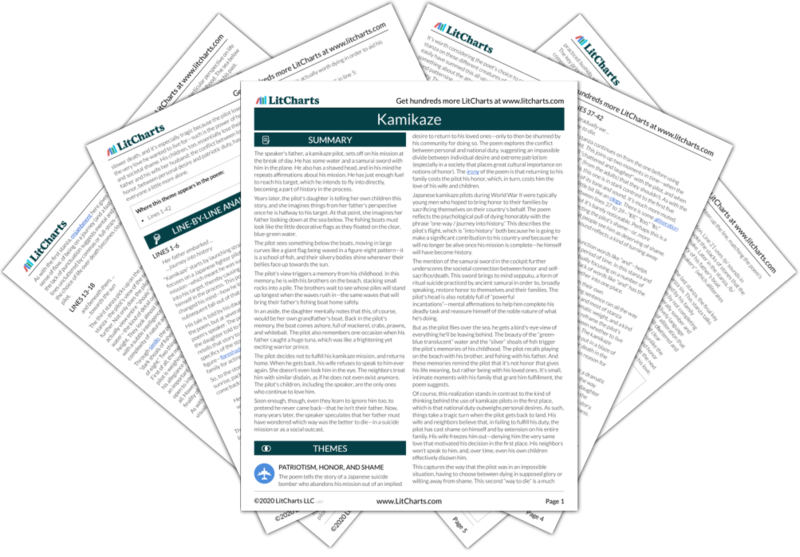 Get the entire guide to “Kamikaze” as a printable PDF.
Download

The Full Text of “Kamikaze”

The Full Text of “Kamikaze”

1Her father embarked at sunrise

2with a flask of water, a samurai sword

3in the cockpit, a shaven head

5and enough fuel for a one-way

7but half way there, she thought,

8recounting it later to her children,

9he must have looked far down

10at the little fishing boats

12on a green-blue translucent sea

13and beneath them, arcing in swathes

15then the other in a figure of eight,

16the dark shoals of fishes

17flashing silver as their bellies

18swivelled towards the sun

19and remembered how he

20and his brothers waiting on the shore

22to see whose withstood longest

23the turbulent inrush of breakers

26to the shore, salt-sodden, awash

29the loose silver of whitebait and once

31And though he came back

33in his presence, nor did she meet his eyes

34and the neighbours too, they treated him

35as though he no longer existed,

36only we children still chattered and laughed

37till gradually we too learned

38to be silent, to live as though

39he had never returned, that this

40was no longer the father we loved.

41And sometimes, she said, he must have wondered

42which had been the better way to die.