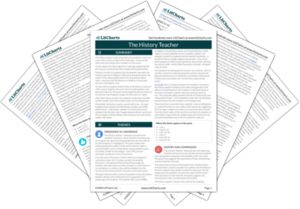 "The History Teacher" first appeared in Billy Collins's 1991 poetry collection Questions About Angels. The poem depicts a history teacher who strives to preserve his students' innocence by telling them sugarcoated, fictitious versions of historical events with all suffering or cruelty removed. Despite his efforts to hide the truth about history—or perhaps because of them—his students become cruel and violent, bullying and beating up their peers on the playground. The history teacher remains unaware of the negative effects of his lessons, seemingly happy to live within the idyllic world that he has created for his ignorant pupils. Collins mixes his traditional wry sense of humor with a striking, serious message about the dangers of keeping learners from the truth. 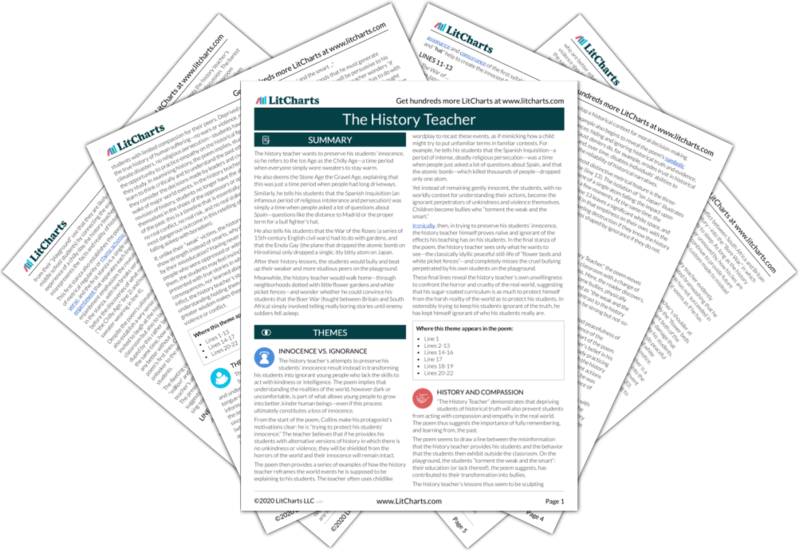 Get the entire guide to “The History Teacher” as a printable PDF.
Download

The Full Text of “The History Teacher”

The Full Text of “The History Teacher”

1Trying to protect his students' innocence

2he told them the Ice Age was really just

3the Chilly Age, a period of a million years

4when everyone had to wear sweaters.

5And the Stone Age became the Gravel Age,

6named after the long driveways of the time.

7The Spanish Inquisition was nothing more

8than an outbreak of questions such as

9"How far is it from here to Madrid?"

11The War of the Roses took place in a garden,

12and the Enola Gay dropped one tiny atom

14The children would leave his classroom

15for the playground to torment the weak

17mussing up their hair and breaking their glasses,

18while he gathered up his notes and walked home

20wondering if they would believe that soldiers

22designed to make the enemy nod off.