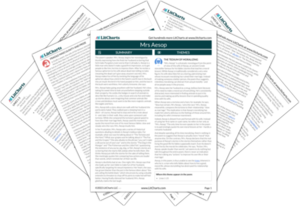 Carol Ann Duffy's "Mrs Aesop" is a poem about an ancient Greek storyteller famous for his fables, or short tales that teach a moral lesson. The poem takes the form of a dramatic monologue from the imagined perspective of Aesop's long-suffering wife, who portrays her famous husband as a condescending, impotent bore whose incessant moralizing has ruined their marriage. The poem implies that Aesop's holier-than-though attitude actually stems from deep insecurities about his masculinity, and cheekily suggests that audiences take the teachings of famous men with a grain of salt. "Mrs Aesop" first appeared in Duffy's 1999 book The World's Wife, a collection of poems told from the perspective of the female counterparts of famous men. 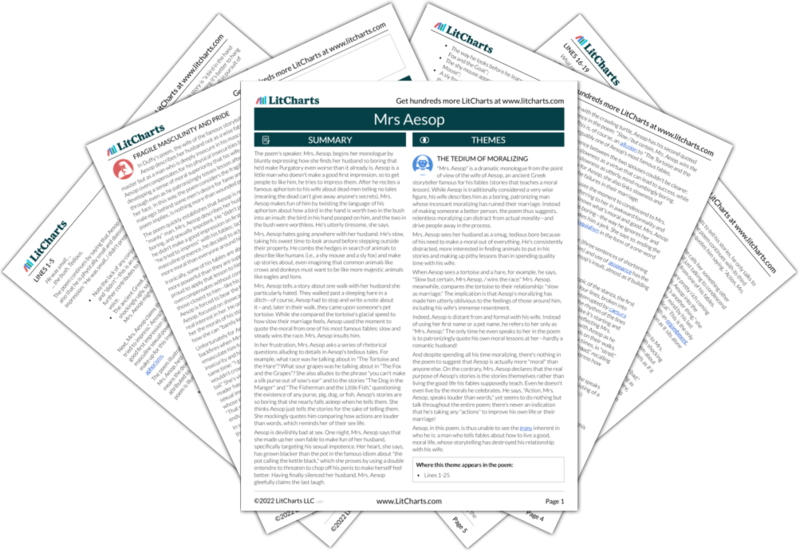 Get the entire guide to “Mrs Aesop” as a printable PDF.
Download

The Full Text of “Mrs Aesop”

The Full Text of “Mrs Aesop”

1By Christ, he could bore for Purgatory. He was small,

2didn't prepossess. So he tried to impress. Dead men,

4that the bird in his hand shat on his sleeve,

5never mind the two worth less in the bush. Tedious.

6Going out was worst. He'd stand at our gate, look, then leap;

7scour the hedgerows for a shy mouse, the fields

8for a sly fox, the sky for one particular swallow

9that couldn't make a summer. The jackdaw, according to him,

10envied the eagle. Donkeys would, on the whole, prefer to be lions.

11On one appalling evening stroll, we passed an old hare

12snoozing in a ditch—he stopped and made a note—

13and then, about a mile further on, a tortoise, somebody's pet,

14creeping, slow as marriage, up the road. Slow

16What race? What sour grapes? What silk purse,

17sow's ear, dog in a manger, what big fish? Some days

18I could barely keep awake as the story droned on

19towards the moral of itself. Action, Mrs A., speaks louder

20than words. And that's another thing, the sex

21was diabolical. I gave him a fable one night

22about a little cock that wouldn't crow, a razor-sharp axe

23with a heart blacker than the pot that called the kettle.

25That shut him up. I laughed last, longest.