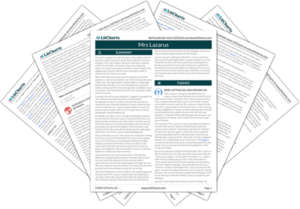 British poet Carol Ann Duffy published "Mrs. Lazarus" in The World's Wife, her 1999 collection of poems focused on the female counterparts to male figures from history and myth. This poem's speaker is the wife of Lazarus, whom Jesus famously raised from the dead in the Bible. Lazarus's resurrection is typically praised as one of Jesus's greatest miracles, but the Mrs. Lazarus of Duffy's poem has a different perspective. Having deeply mourned the loss of her husband, Mrs. Lazarus has finally begun to heal—and to allow herself a chance at new love—when Lazarus unexpectedly returns to a world where he no longer belongs. The poem explores the difficult nature of grief while questioning the concepts of faithfulness and betrayal. It also prompts readers to reconsider how traditional expectations around women's bereavement make it difficult for them to move on with their lives. 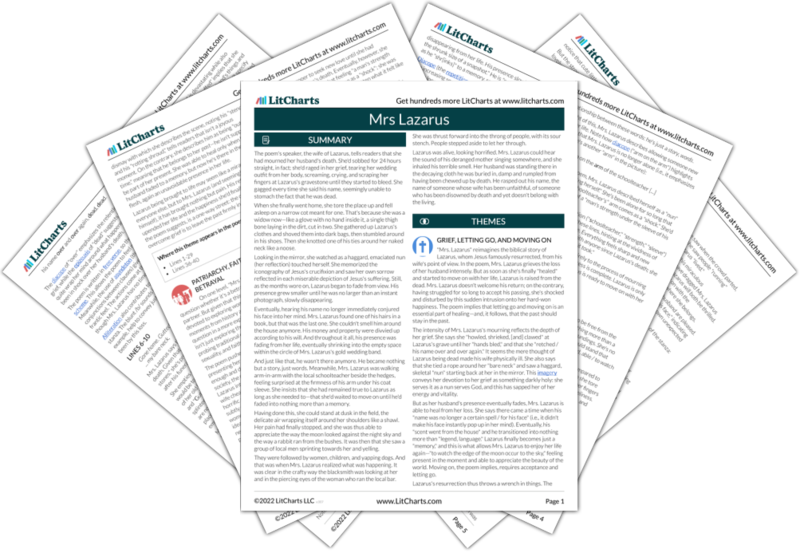 Get the entire guide to “Mrs Lazarus” as a printable PDF.
Download

The Full Text of “Mrs Lazarus”

The Full Text of “Mrs Lazarus”

1I had grieved. I had wept for a night and a day

2over my loss, ripped the cloth I was married in

3from my breasts, howled, shrieked, clawed

4at the burial stones till my hands bled, retched

5his name over and over again, dead, dead.

6Gone home. Gutted the place. Slept in a single cot,

8in the dust, half. Stuffed dark suits

9into black bags, shuffled in a dead man's shoes,

10noosed the double knot of a tie round my bare neck,

11gaunt nun in the mirror, touching herself. I learnt

12the Stations of Bereavement, the icon of my face

13in each bleak frame; but all those months

14he was going away from me, dwindling

15to the shrunk size of a snapshot, going,

16going. Till his name was no longer a certain spell

17for his face. The last hair on his head

18floated out from a book. His scent went from the house.

19The will was read. See, he was vanishing

20to the small zero held by the gold of my ring.

22my arm on the arm of the schoolteacher–the shock

23of a man's strength under the sleeve of his coat–

24along the hedgerows. But I was faithful

25for as long as it took. Until he was memory.

26So I could stand that evening in the field

27in a shawl of fine air, healed, able

28to watch the edge of the moon occur to the sky

29and a hare thump from a hedge; then notice

30the village men running towards me, shouting,

31behind them the women and children, barking dogs,

32and I knew. I knew by the sly light

33on the blacksmith's face, the shrill eyes

34of the barmaid, the sudden hands bearing me

35into the hot tang of the crowd parting before me.

36He lived. I saw the horror on his face.

37I heard his mother's crazy song. I breathed

38his stench; my bridegroom in his rotting shroud,

39moist and dishevelled from the grave's slack chew,