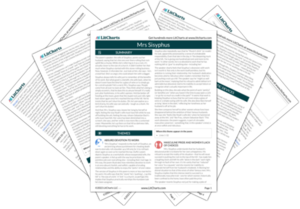 Carol Ann Duffy's "Mrs Sisyphus" presents the mythical Sisyphus, a Greek king whose punishment for trying to trick the gods was to roll a boulder up a hill for eternity, as a modern-day workaholic: he's so invested in succeeding that he can't be bothered to spend time with his lonely wife, who's fed up with her husband's irrational devotion to an impossible task. The poem pokes fun at contemporary corporate culture, suggesting that the obsession with work robs people of the ability to actually enjoy their lives. In highlighting Sisyphus's neglect of his wife, the poem also implies that women have often had to pay the price for men's vanity and pride. "Mrs Sisyphus" was published in Duffy's 1999 collection The World's Wife, alongside other poems written from the perspective of female counterparts of famous men from history and myth. 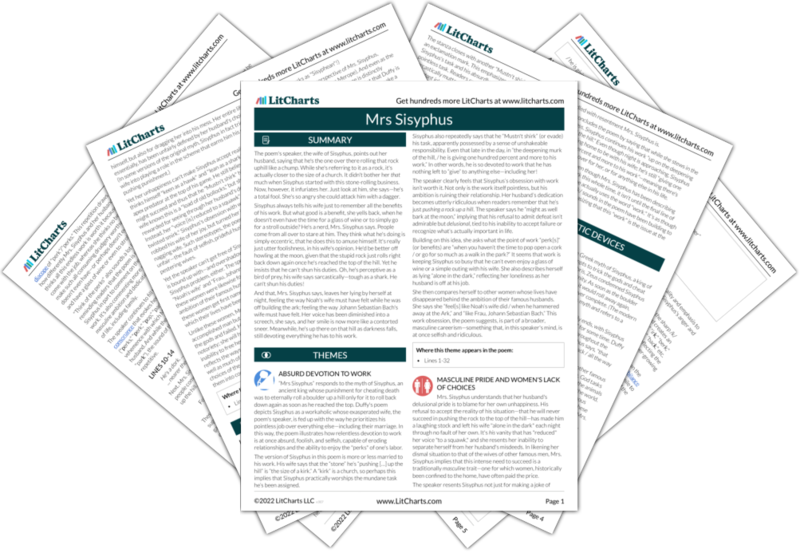 Get the entire guide to “Mrs Sisyphus” as a printable PDF.
Download

The Full Text of “Mrs Sisyphus”

The Full Text of “Mrs Sisyphus”

1That's him pushing the stone up the hill, the jerk.

2I call it a stone—it's nearer the size of a kirk.

3When he first started out, it just used to irk,

4but now it incenses me, and him, the absolute berk.

5I could do something vicious to him with a dirk.

6Think of the perks, he says.

7What use is a perk, I shriek,

8when you haven't the time to pop open a cork

9or go for so much as a walk in the park?

11Folks flock from miles around just to gawk.

14A load of old bollocks is nearer the mark.

17that feckin' stone's no sooner up

18than it's rolling back

23lean as a shark

25But I lie alone in the dark,

27when he hammered away at the Ark;

29My voice reduced to a squawk,

30my smile to a twisted smirk;

31while, up on the deepening murk of the hill,

32he is giving one hundred percent and more to his work.